A homeowner is outraged after she said a construction company is telling her to pay for services that she never contracted them for. 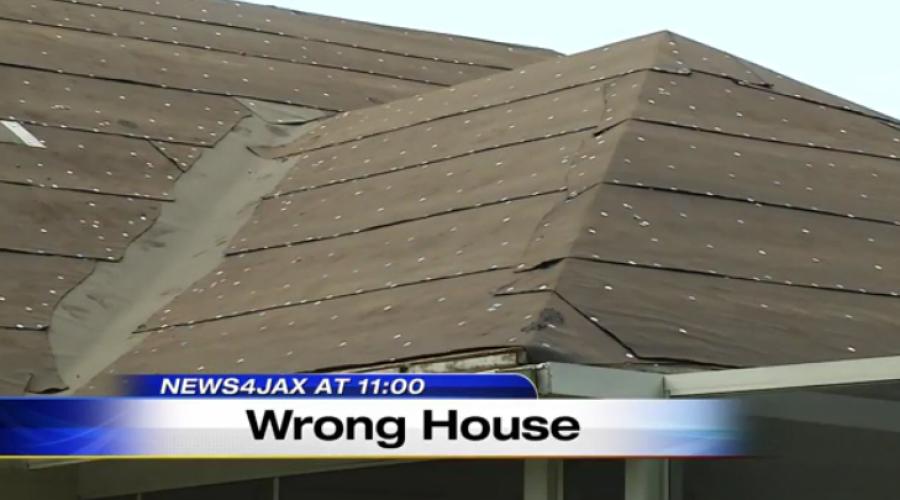 According to K&G Construction Company's attorney, the person who hired the roofers gave the wrong address.

Local Florida news affiliate News4 JAX is reporting that A Jacksonville homeowner is outraged after she said a construction company is telling her to pay for services that she never contracted them for.

Two weeks ago, homeowner Shontey Hambrick said K&G Construction Company began work on her roof, but there was one problem.

"I told him multiple times, 'I think you have the wrong address, sir. I think you need to check your paperwork.' He goes back and checked his paperwork and comes back and says, 'Ma'am, this is the correct house,'" Hambrick said.

According to Hambrick and K&G Construction Company's attorney, the person who hired the roofers gave the wrong address.

More than halfway through the process, Hambrick said, the company agreed to finish her roof if she signed a building permit application and a notice of commencement.

But Hambrick refused. She told News4Jax that the documents were backdated.

"I read the fine print. And it says, in the fine print, me, being the homeowner, if I sign this document, which by the way was dated June 27 and she arrived at my door June 28, if I signed the document, I'm swearing there has been no commencement of any type of work of any shape or form on my roof before signing the document," Hambrick said.

K&G Construction Company said it was contracted to replace shingles, and it admitted a mistake was made. But the company said when it tried to fix the issue, Hambrick refused to let it happen.

Now, K&G Construction Company's attorney said Hambrick needs to pay up. A letter sent by the company's attorney reads, "You clearly understood that your roof needed re-roofing. You have told my client, Aaron Galley, that you misunderstood who the roofers were and thought that Mr. Galley's roofers were there from your insurance company."

The letter also mentions how Hambrick requested quotes from different roofers a few weeks ago and assumed her insurance company sent out K&G Construction Company.

In the letter, the attorney says, "First, you have to sign the building permit and provide it to Mr. Galley. Next, you must go ahead and pay Mr. Galley in advance for the cost of the roofing materials and labor. If you do not agree to do those two things, then Mr. Galley will not complete the re-roofing project."

Hambrick said the company has caused her and her home a lot of unnecessary grief. She said she prays every day that it doesn't rain because parts of her home now leak.

"Just trying to resolve this amicably. I would help, but like I said, I don't know. I really don't know," Hambrick said. "They took the shingles off and just left it like this."

News4Jax spoke on the phone with the vice president of K&G Construction Company and with the company's attorney. They acknowledged a mistake was made, but they maintain if the homeowner had signed their documents, this would have been fixed with no fee to the homeowner.