Widening of I-10 in Beaumont 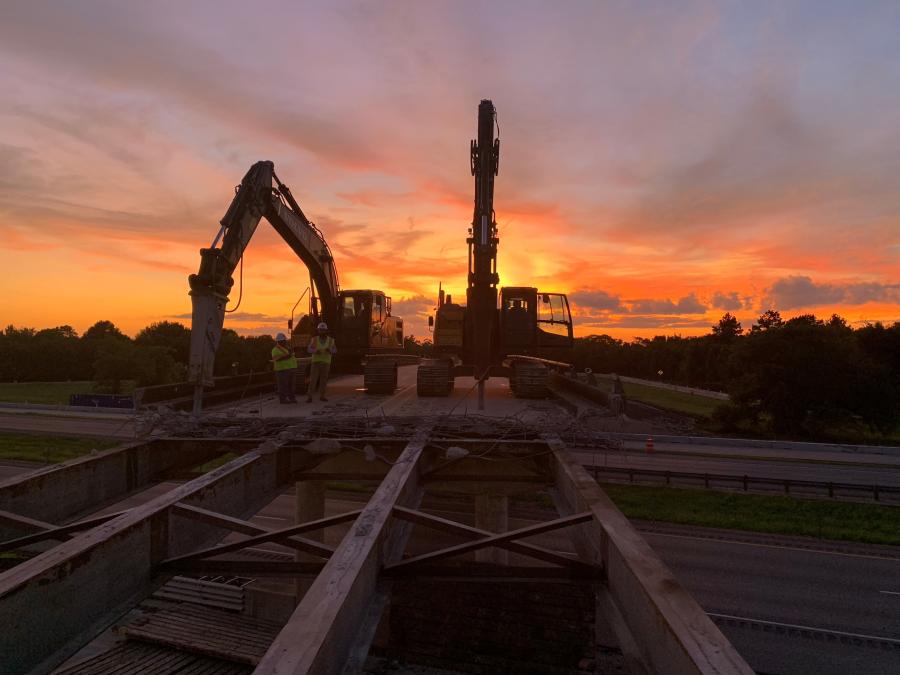 To cause the least amount of inconvenience to motorists, much of the work is being done during off-peak hours. (HW Lochner photo)

Crews are putting in long hours on a marathon project that will widen 22 mi. of I-10 near Beaumont, Texas.

The Texas Department of Transportation (TxDOT) is overseeing the more than $270-million effort, which, due to size, is divided into segments.

"These three projects are necessary to improve the safety of I-10 and assist in congestion," said TxDOT spokesperson Sarah Dupre. "In addition to widening from four to six lanes, the projects also will widen all the shoulders. It's estimated that 1,000 people are moving to Texas daily. It's crucial that we're able to meet the needs of the public and maintain the best system possible."

Houston's Williams Brothers Construction Co. Inc. is responsible for the two western projects, while Johnson Bros. Corporation of Roanoke, Texas, is handling the 9.9-mi. eastern section. Work on SH73-Hamshire began in 2016 and should be completed by 2021. Construction started on Hamshire-FM365 in 2017, and is expected to finish in 2022. The FM365-Walden Road project began earlier this year, with a completion date of 2024.

Most of the work occurs during times that will least affect motorists. 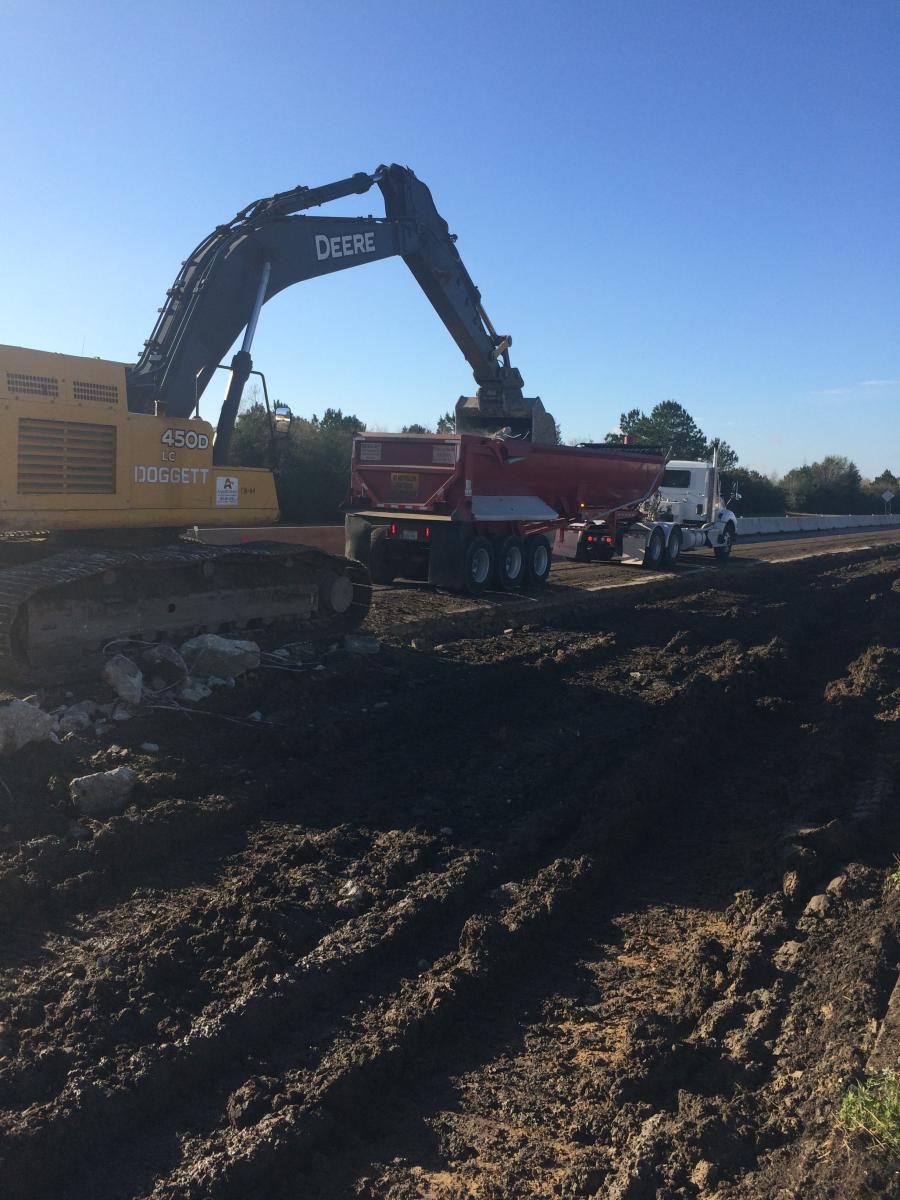 "The majority of lane closures take place in the overnight or weekend hours, to have as little impact on the driving public as possible," said Dupre.

The projects will provide a safer and less-congested interstate system for the thousands of people who travel I-10 daily. The mainlanes will be concrete pavement when completed.

According to Dupre, the biggest challenge on the job is accommodating and handling the amount of daily traffic volumes, while providing as much work space for the contractor. As for overseeing three concurrent projects, "Two of the projects are assigned to the Liberty Area Office, and one is assigned to the Beaumont Area Office to help split the management requirement. Communication between all three projects is vital for a successful outcome.

"Splitting the overall corridor into three separate projects assisted in the areas of funding, planning and environmental clearance. This also helps to complete the roadway in sections, and balance the impacts to motorists."

One of the chief goals is keeping the I-10 widening project moving safely and without major issues.

"Safety is TxDOT's number one concern," said Dupre. "For these projects, we've had a great deal of coordination with the Texas Department of Public Safety and the Jefferson County Sheriff's Department. Additional signage and public outreach also have been key in urging the public to slow down and drive safely." 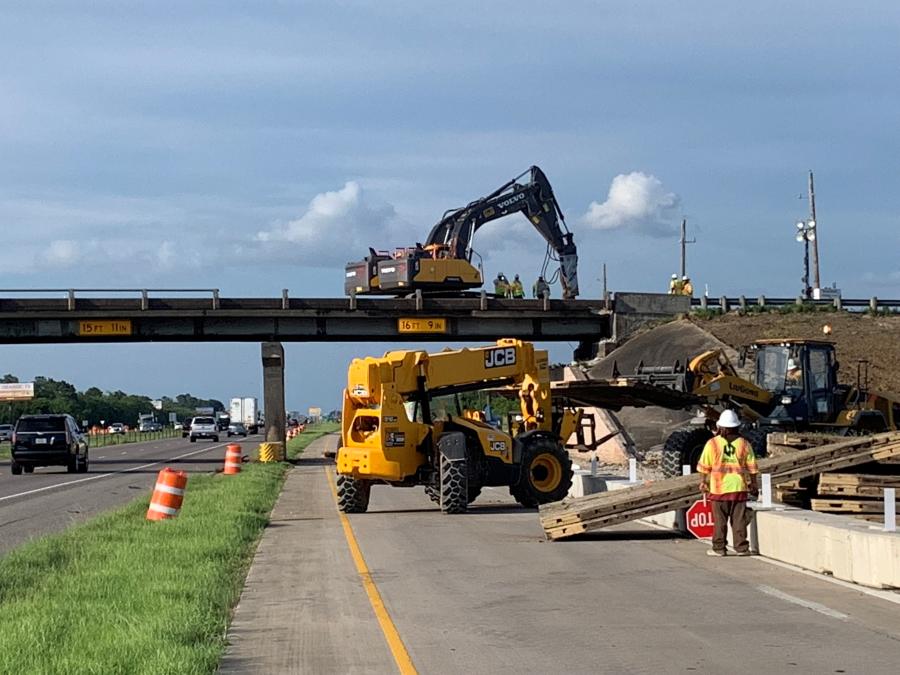 Dupre also noted that staying in touch daily is crucial to completing such a major undertaking.

"Communication between all parties is the key to a successful project. By communicating and working closely with our contractors, we can relay the appropriate messages to motorists about upcoming work and closures."

Working on a project that will take years to complete means taking the time to plan and prepare.

"Startup on projects this size is the most challenging. The contractors set up an on-site cement base pug mill, on-site pre-casting yard, an off-site concrete batch plant and an off-site asphalt plant. Once the team got to know each other and roles and responsibilities were worked out, the day-to-day operations began running smoothly. It takes diligence on the part of our two area offices to keep the project teams motivated and working together, so that problems that arise are addressed quickly and in a safe and correct manner." 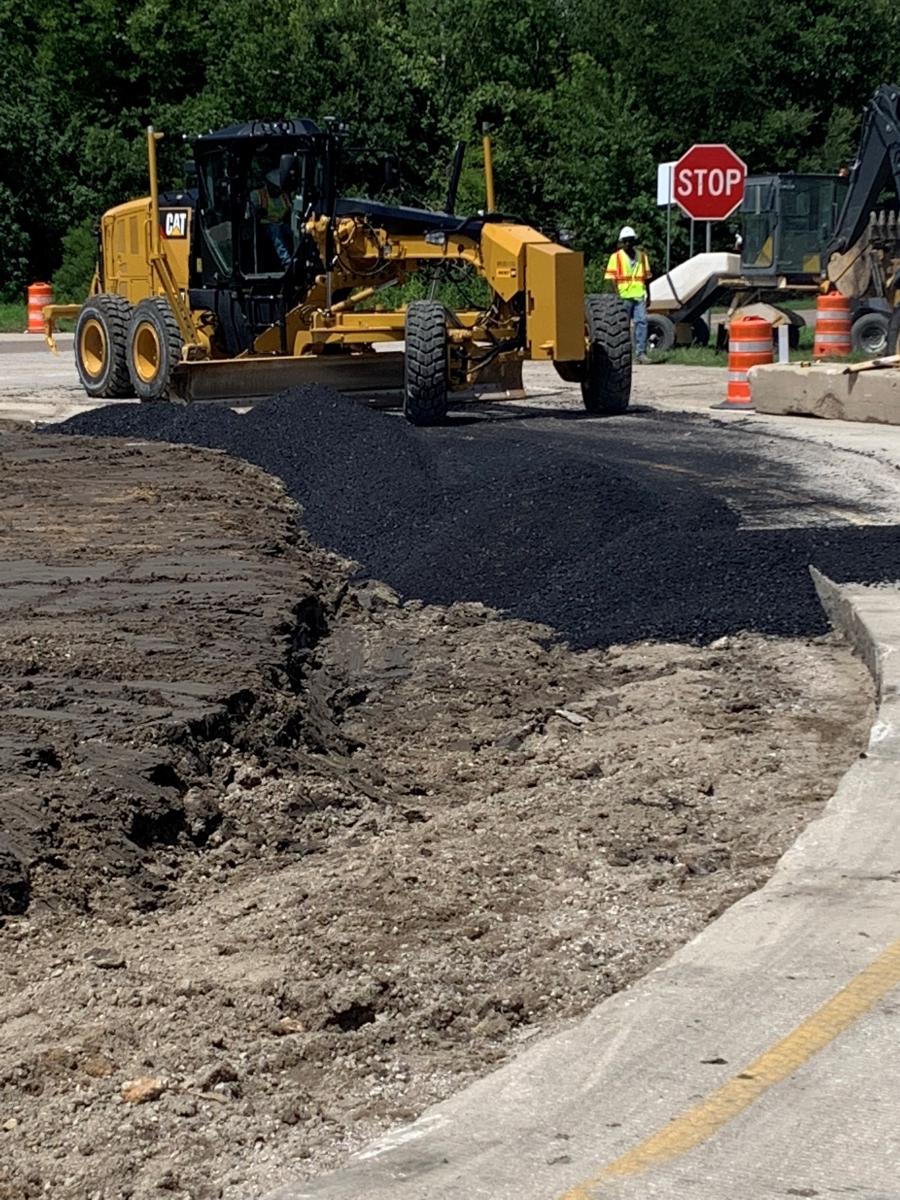 "Jefferson and Chambers counties are developing, and drainage needs are changing with it. We partnered with the local drainage districts to appropriately size new stream crossings. During project development, drainage on such flat terrain can be challenging. Temporary drainage was installed to allow our subgrade soils to quickly dry between rain events and speed construction.

"We are reversing the stack on a few of our interchanges," Wiemers continued. "This creates a 20- to 30- ft. fill section above the natural ground. Under the approximately10-ft.-thick layer of textbook Beaumont Clay, there lies a deep saturated and soft layer of clays containing striations of slicken skins and silty deposits. We have learned from a historical retaining wall section through the City of Beaumont."

Crews have witnessed differential settlement occur at the interface of the Mechanically Stabilized Earth (MSE) retaining wall backfill and the general roadway fill.

"We also have seen some situations where over a long period of time, the MSE wall itself may settle. These challenges have been addressed by requiring surcharge loading and wick drains with a settlement period for the general roadway fill. Ground improvement via concrete piling installed on a grid and topped with layers of geotextile and Flexible base has been provided below the stabilized earth zone of on retaining walls."

As for other tasks required during construction, "Demolition work has been going well, as we have removed bridge structures and the old concrete pavement in many locations," said Omar De Leon, Liberty area engineer. "The majority of this work has been during off-peak hours."

Equipment being used on the job includes bulldozers, motorgraders, drill shaft rigs, hot mix laydown machine, a mud tank and sand separator, a concrete pump truck and rollers. Some of the main materials being used during construction include concrete, steel, asphalt and soil stabilization materials.

Work continues on the various assignments at a steady pace. In the 5.2-mi. section, in Chambers County near Winnie, the contractor is currently completing work on the FM 1663 bridge widening, as well as completing grading and base work on the outside eastbound lane in preparation for paving. 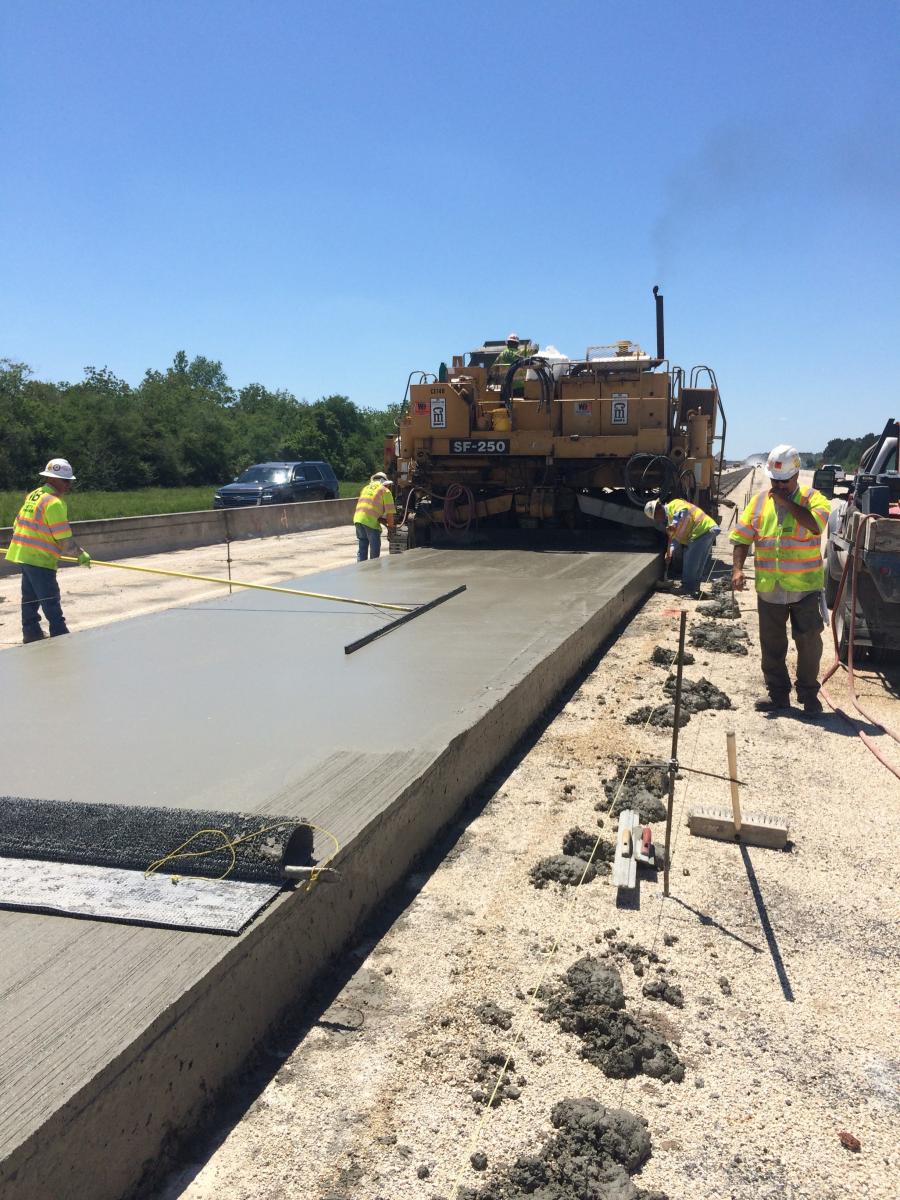 In the 6.8-mile section, in Jefferson County near FM 365, the contractor is working on the grading and base work for inside lanes, as well as grading, base and pavement work for the outside detour lanes in various areas of the project. Bridge widening work is commencing on the Taylor Bayou bridge structure.

Regarding the 9.9-mi. eastern section, the Brooks road overpass is being reconstructed to meet the 18-ft., 6-in. freight clearance. Detour pavement is being constructed to facilitate construction of the Smith Road interchange, and various utility relocations are occurring. Drainage box culvert cross drainage structures are being extended and replaced at several crossings.

As part of the I-10 widening project, crews are removing the 50-year-old concrete pavement and reconstructing the full depth.

"Road traffic is detoured to the side, old concrete is broken down and removed, drainage and bridge structures are built or widened as appropriate, grading and sub-base work is performed, pavement and steel are laid down for new pavement and center median barrier," said Dupre. "For this project, the inside shoulder and two travel lanes were constructed first, then the outside travel lane, shoulder and connecting roads are built." 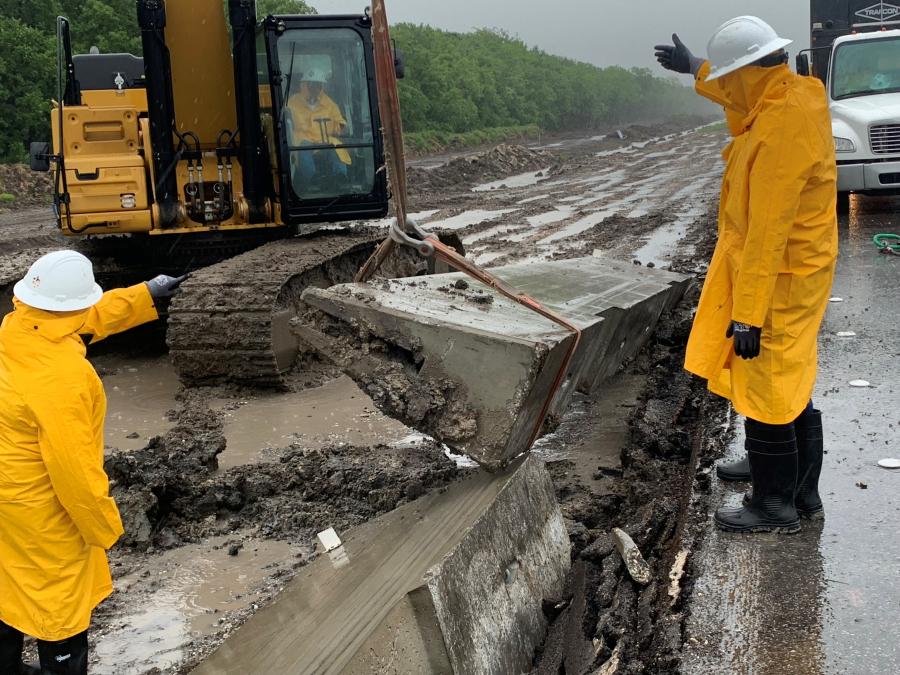 The corridor was originally a four-lane, with a grass median, divided interstate highway. Pavement, while maintained, was near the end of its service life. Dupre said the project was designed and environmentally cleared in approximately two years.

"Getting these large, long and complex projects to construction was a significant task. We previously completed the IH10 at FM364 [Major Drive] interchange a few years before this construction began. Having this interchange complete in the middle of the corridor was critical to maintaining access and emergency response availability. Another significant task completed as part of this project was the rebuilding of the Brush Island Overpass, and bringing it to a clearance level of 18 ft., 6 in. to meet freight clearance.

While progress continues to be made, a number of key tasks have yet to be carried out. On the 5.2-mi. section, this includes pavement of the outside travel lane and shoulder, ramps and completion of the bridges. On the 6.8-mi. section, grading and base work is needed for the interior shoulder and travel lanes, as well as reversing the stack of Smith Road interchange. This is the key component of the 9.9-mi. section, and will cause the greatest impact to local traffic.

Dupre said all phases of road construction will be constructed in sequence, and will overlap so that it progresses together. On the roadway portions, constructing the subgrade will be the most weather-dependent, and has the potential to take the longest amount of time. CEG