Widening of VA Route 28 Now Under Way in Fairfax County 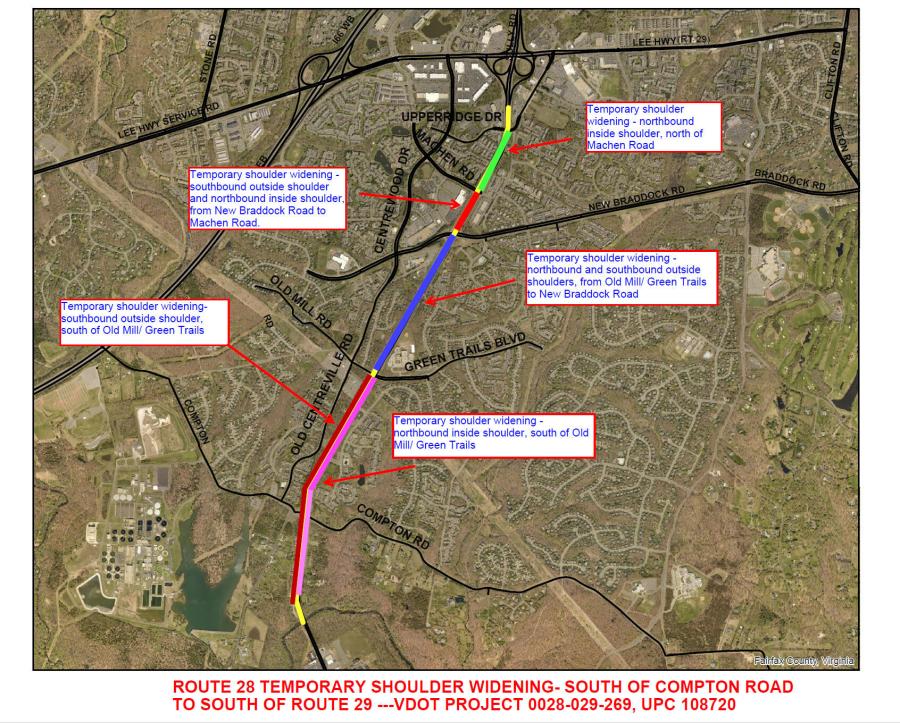 Construction preparations began Feb. 15 in Fairfax County, Va., to widen Virginia Route 28 from near the Prince William County line to the interchange at U.S. Highway 29 in Centreville.

The 2½-mi. stretch of state road, west of Washington, D.C., will be widened from four to six lanes between the bridge over Bull Run, located just south of Compton Road, up to U.S. 29, shortly before the entrances to Interstate 66.

The Virginia Department of Transportation (VDOT) authorized the award of the Route 28 Widening Project contract on May 12, 2020, to Shirley Contracting Company LLC, in Lorton, Va., based on its bid of $56,882,900.

According to the Fairfax County Department of Transportation, the contractor began by installing construction signs and message board along Rt. 28, advising of the upcoming project.

The first stage of the project will include paving and strengthening portions of the existing shoulders along the route of the entire project.

In the northern portion of the project, between the intersection of Rt. 28 and Old Mill Road/Green Trails Boulevard and the interchange at U.S. 29, crews will work on the outside (right) in both the southbound and northbound directions.

After the initial paving and shoring, traffic will be shifted onto newly paved shoulders so that construction can continue with minimal impact to traffic flow during peak travel periods, according to Fairfax County.

Route 28 serves residential and business destinations from Remington in Fauquier County to Rt. 7 in Loudoun County, connecting U.S. 29, Rt. 234, Interstate 66, Rt. Route 50, Dulles International Airport and Route 267 in between. The corridor has experienced increased congestion for many years, particularly in Prince William and Fairfax Counties south of I-66. More than 57,000 vehicles use the highway each day, creating some of the highest travel times in the region and creating adverse effects for area residents and businesses.

While that work is going on, neighboring Prince William County is planning to build a Rt. 28 bypass through Manassas and Manassas Park. The effort was approved last September by the PWC's board of supervisors.

The bypass will add a four-lane road that extends Godwin Drive from Liberia Avenue in Manassas, travel through Bull Run Regional Park and join Rt. 28 in Fairfax County, just south of Compton Road, located a half-mile north of Bull Run.

What is still unclear is how the bypass and current Rt. 28 will feed into each other, but the county has said it will select a design and engineering firm soon.

The Northern Virginia Transportation Authority (NVTA) has recently allocated $89 million toward the approximately $300 million bypass infrastructure project. NVTA has already allocated $6 million that went towards feasibility and environmental studies. The remaining cost could potentially be covered by a $200 million bond referendum approved by county voters on Nov. 5, 2019. The PWC board of supervisors will need to approve and authorize any bonds for the project.

During the design and engineering phase, which will take two years, PWC will select an engineering firm to complete the comprehensive and detailed design process. The complete design will determine the exact location and final design of the bypass.