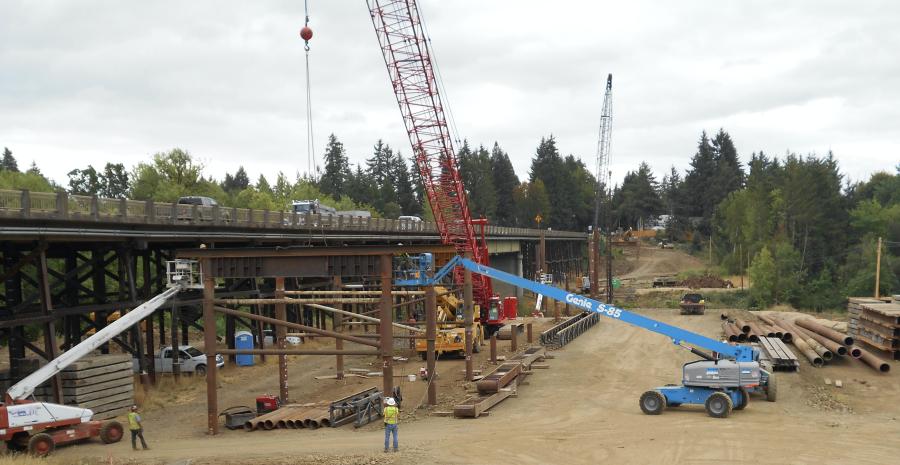 ODOT originally considered building a new bridge without first constructing a diversion bridge, but decided a straight bridge replacement would put too much stress on the nearby neighborhoods.

A $38 million project in Oregon's Yamhill County will replace a 70-year-old bridge with a new, wider bridge designed to accommodate the growing vehicle and pedestrian traffic on the main access into the city of McMinnville.

The Yamhill River Bridge was built in 1951 and has seen better days, said Lou Torres, spokesman of the Oregon Department of Transportation (ODOT).

"We try to maintain the old bridges as best we can so they are drivable and we don't have to spend money building new," said Torres. "This one has been showing its age. We've been talking about replacement for 10 years now. A number of components are falling apart. Not the substructure, but the railing is deteriorating, the sidewalk is crumbling. The existing bridge is also very narrow. It's just time to replace the bridge."

The existing bridge is a 3-mi. lane or spur road that comes off of Highway 18 running along the southern portion of McMinnville. ODOT originally considered building a new bridge without first constructing a diversion bridge, but decided a straight bridge replacement would put too much stress on the nearby neighborhoods with an average of 16,000 cars and trucks trying to find alternate routes into town.

The bridge also provides access to a nearby medical facility and a detour would have cost emergency vehicles a significant amount of time in accessing medical care. 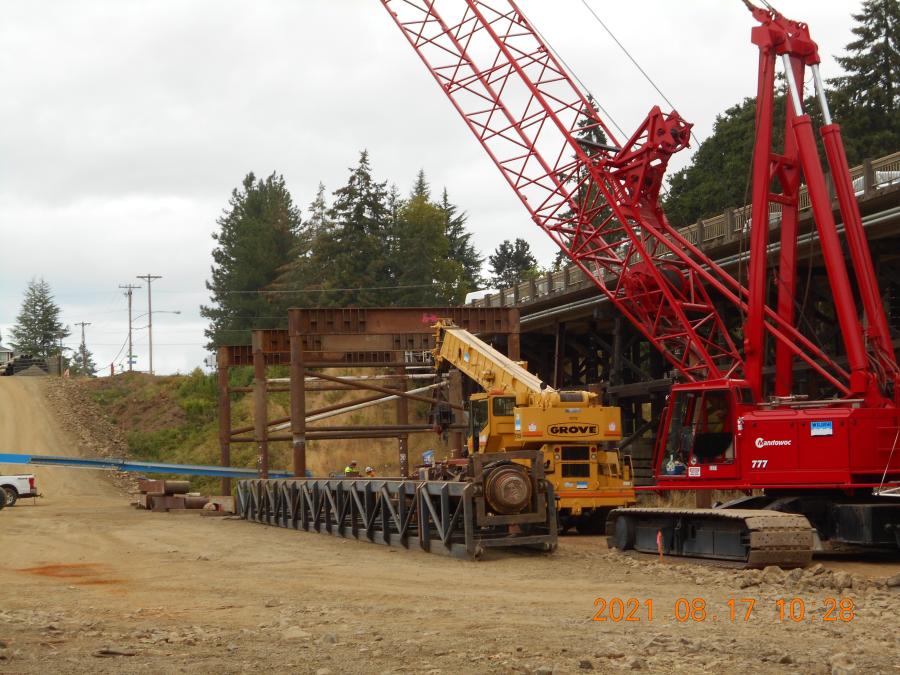 "It became very clear we needed to build a detour bridge right next to the existing bridge," Torres said. "Unfortunately, whenever you do that, it increases the cost significantly, but also how long it takes to finish."

Crews with Wildish Construction Company, headquartered in Eugene, Ore., are currently halfway through the construction of the diversion bridge, which has added $1.8 million to the cost and about two years to the project timeline.

As far as construction, the project is on schedule with the new bridge expected to be complete in 2025.

The diversion bridge will be a steel stringer or multi-beam bridge with 37 bents total, said Leia Kagawa, ODOT assistant resident engineer. It will be approximately 1,500 ft. in length and 40 ft. wide with 29 ft. for vehicles and 15 ft. for a walking path.

"There is a lot of pedestrian traffic on the existing bridge," said Kagawa. "The extra footage is for the buffers and handrails. The bridge itself will consist of steel piles, diagonal bracing and wire rope cross bracing with turnbuckle hardware. Then there will be the caps and strings, and on top of the stringer, 6-by-12-foot Douglas fir timbers with plywood and asphalt. There will be precast and press-stressed slabs between the first three bents on either side of the diversion bridge."

The diversion bridge also features an S-curve necessary to direct traffic from the existing bridge onto the parallel temporary bridge, but will not be necessary in the new bridge.

Equipment on site, the bulk of it owned by Wildish, includes:

One of the biggest challenges of the project is managing traffic which travels at a high rate of speed right up to the work site and, without adequate management, could cause backups on the highly traveled Highway 18. Environmental considerations also pose numerous challenges, Kagawa said.

"On the south side of the river, there's a lot of National Resources Conservation Service [NRCS] land. "We're doing some restoration work where there are rare plants in the vicinity and a lot of wetlands.

The topography features an active channel, then flattens out before turning hilly again. The flat segment is home to a large segment of wetlands.

"We have to tread very lightly there," Kagawa said. "There are a lot of conditions for us to work there and limitations to what we can do. It's really a constrained footprint and type of footprint we can use. This impacts the diversion and future bridges and even the future work bridge, a smaller structure adjacent on the east side of the existing bridge that will be built to make sure we can put all the material on the permanent bridge."

As has been the case with many projects in the past 18 months, the pandemic also has created problems. Some materials, such as the pipes needed for a temporary sanitary sewer line beneath the detour bridge, are back ordered and difficult to obtain. Kagawa said they are hopeful that by ordering early, crews will get what they need.

"If we order now, we should be OK," she said. "We're just making sure it is exactly what we want. If we miss this window it could take longer."

Increased costs associated with lumber also are an issue.

"Lumber prices are really, really crazy," Kagawa said. "The material is there, it's just the escalation of cost was not foreseen at the time of the bid. That has put a little stress and strain on this project. There is talk about putting in an escalation clause in the contract, which is something we haven't done before. The agency recognizes the huge fluctuation in lumber prices."

The proposed structure will be about 50-ft. wide with 5.5-ft. sidewalks on both sides and 7-ft. shoulders to accommodate pedestrians and cyclists. The bridge will be 970-ft. long on six bents. It will use steel plate girders and have reinforced concrete end panels. It will feature aesthetic details on the bridge rail with lighting and utilities affixed to the structure.

"As mentioned, the areas immediately surrounding the bridge are environmentally sensitive," Kagawa said. "A separate, but related contract will later go out for extensive plantings in the disturbed work area. The contract calls for the installation of fish logs to promote fish habitat immediately under the bridge."