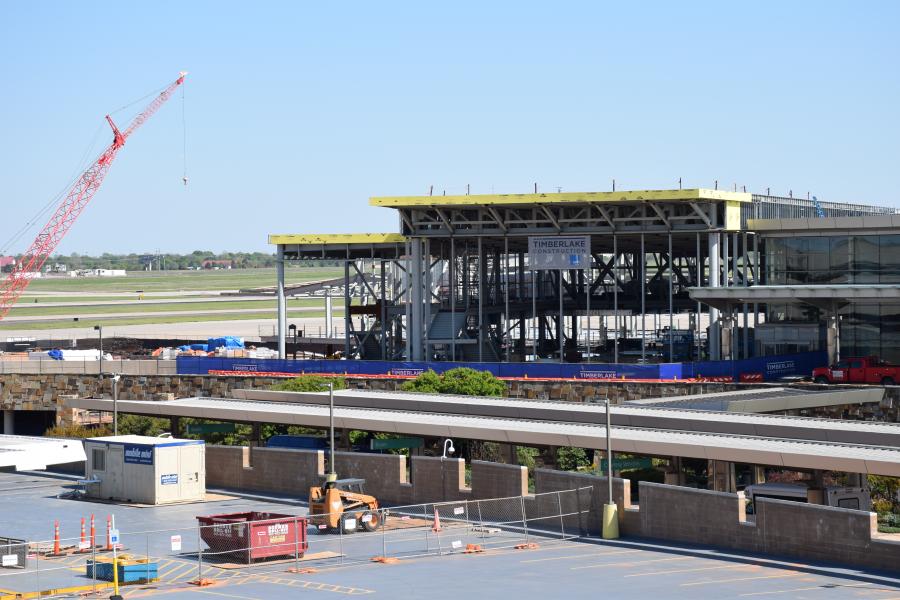 Oklahoma City-based Timberlake Construction is serving as the general contractor on the $89 million project.

John Day, senior project manager for the Oklahoma City Airport Trust, does just that. Acting as a communications liaison, he ensures that the airport expansion project runs smoothly.

Oklahoma City-based Timberlake Construction is serving as the general contractor on the $89 million project. Approximately 76% of the funds come from passenger facility charges; the rest from airport revenue bonds. 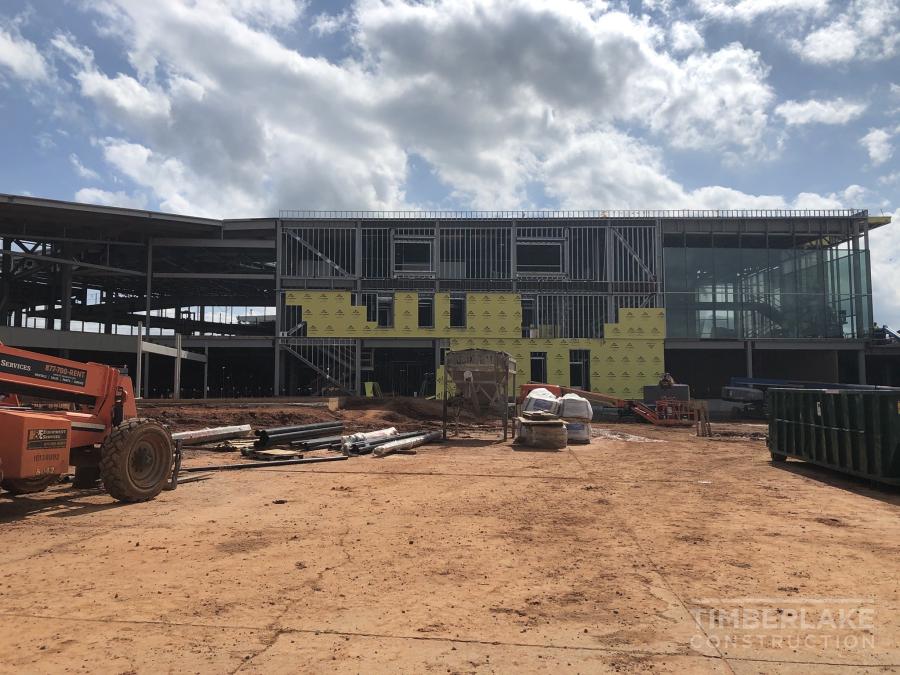 Rather than set up a batch plant as they do for runway work, the Trust opted to haul in concrete to pour decks for the new building. Before that point, structural steel support was erected for the composite steel deck on which the concrete deck sits. This was done for four levels: basement, first floor, second floor and mezzanine. "We floated the metal deck," Day elaborates.

A large crawler crane placed the super trusses for a column-free space on the second level, Day says. Another architectural feature, the column-free lobby and checkpoint area is an open, inviting space that welcomes passengers. Expansive clerestory windows drench the space in natural light and offer sweeping views of the airfield. A large atrium with an enormous skylight will provide a place for people to gather.

But long before any steel arrived or concrete was poured, site prep included the demolition of a 100,000 sq.-ft. cargo building and rerouting of utilities, communication bands, fire lines and sanitary lines to go around this building. Day says that work was completed as part of a 2016 enabling work project outside the scope of this contract.

The anticipated opening date for the new concourse and town square is January 2021, with the remaining portion completed third quarter of 2021. It's a busy jobsite as crews endeavor to meet that deadline. Day says there can be 12 to 18 subs with 50 to 100 people on site at any given time. "The major trades are here at the same time."

Specific schedules depend on the sub. "Some, like the elevator sub, work four, 10s," Day lists. Others are working Monday through Friday. There is minimal overnight work during certain phases, but it's the exception, he adds. 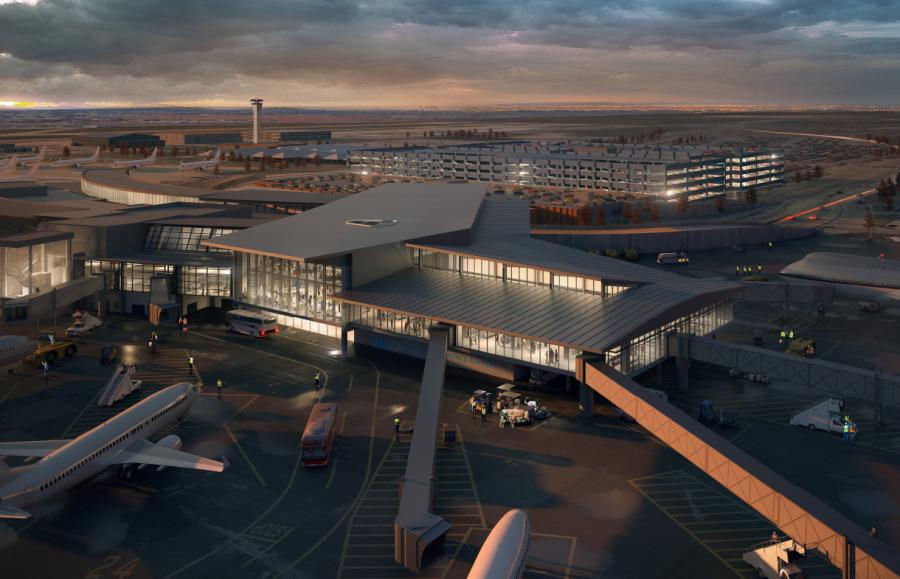 They are currently on schedule, thanks in part to the absence of any major challenges. "There were a few early hiccups, like getting the pier depths correct and matching the existing floors' site elevation," Day recalls, adding that the project has been in progress for a year and things are going smoothly for the most part. Some suppliers are having issues acquiring materials and some trades have had minimal employee issues due to COVID-19, but Day doesn't foresee any significant delays.

"There are always challenges with a retrofit," he adds, explaining that some work is being done in the footprint of the original building. However, the expansion to the east is a greenfield project.

Not only does Day expect a fourth expansion project eventually, but he says a related $7 to $8 million project to grade the airfield apron to improve drainage around the new building will begin soon. "We're very specific about how airfields are graded, so that will have to be done."

An eight-lane consolidated security checkpoint can be expanded to 10 lanes, which will allow TSA to screen passengers more efficiently. When the last terminal expansion began in 2001, the general public had access to the concourse, so the terminal design was based on the flow of people to and from the concourse. When the Transportation Security Administration was created after 9/11, new security measures were implemented, including more intense screening and access to the concourse limited to ticket holders. These changes required more staff and equipment in a tight space, resulting in crowded entry points and slow circulation. 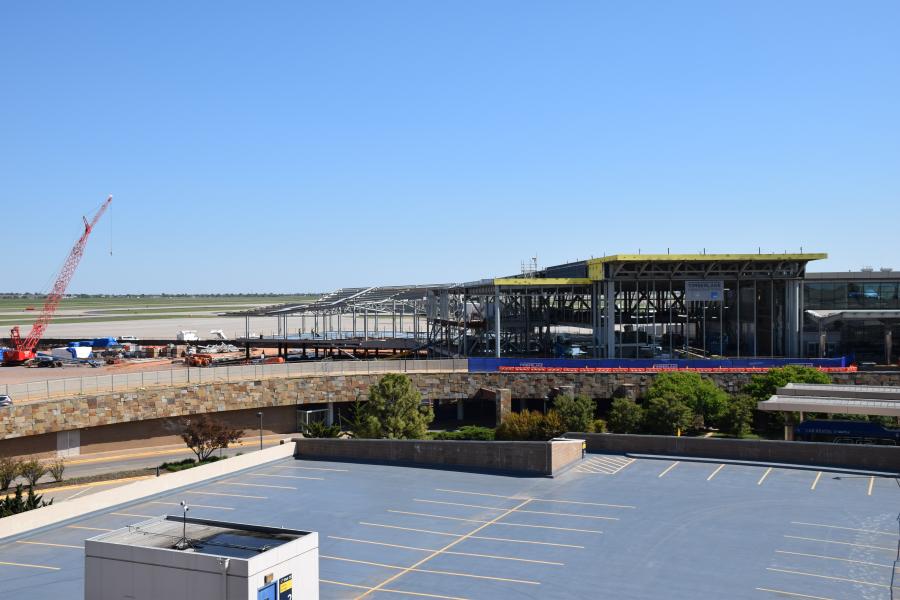 Those issues are being addressed. "FSB, an Oklahoma City-based architectural-engineering-planning firm, led the design and engineering process for the project," Carney says, "joined by partner HOK, who provided conceptual design services."

Designed to TSA standards, the new centralized checkpoint will streamline the passenger screening process and improve wait times by providing dedicated lanes for specific groups such as people with disabilities, TSA PreCheck or family-only lanes. More pre-security and post-security spaces will provide a streamlined process and easy access, significantly reducing check-in time and allowing passengers to more quickly get to their gates. The column-free layout gives TSA flexibility to reconfigure the area as technology, equipment and procedures evolve.

A post-security "re-composure area" will provide 11,500 sq. ft. of lounge, circulation and amenity space, including larger restrooms, a lactation room and a wheelchair-accessible pet-relief area. The space is wide-open with a grand skylight and floor-to-ceiling windows. For non-ticketed passengers, Carney describes a 4,200 sq.-ft. lounge that will provide expansive views of the terminal ramp and aviation activity.

The new concourse will also provide a variety of seating options and two new locations for food and beverage.

Renovations in the Existing Terminal

Spatial changes are also in store for the existing terminal, where checkpoints will be renovated into 5,200 sq. ft. of "meeter/greeter" lounge space, as Carney describes it, with seating and views of the concourse. The old airport didn't offer a designated space for greeting friends and family. When the new checkpoint is open, the old checkpoints will be converted into spacious lobbies with seating and flight information monitors.

In addition, the central entrance/exit vestibules on the ticketing level are being reconstructed to create 1,600 sq. ft. of additional circulation space, Carney points out.

A 2006 renovation project called "reset the aesthetic," updated the 1960s-era terminal building by incorporating native stone from Ark., stainless steel, ceiling-to-floor windows, flat-panel stained wood accents on the soffits and furr downs. But that expansion added only one new airline gate and the security checkpoint featured a "pre-TSA" design, he points out.

This expansion will address the need for additional airline capacity, a streamlined security checkpoint and improved public circulation space with expanded greeting areas. In addition to interior enhancements to the existing facilities, new amenities will include ticket counters, additional seating in baggage claim areas, lobbies and concessions, expanded shopping and dining options, along with a public observation gallery on a suspended viewing deck on the mezzanine level, available to non-ticketed passengers, with lounge space and exhibits. 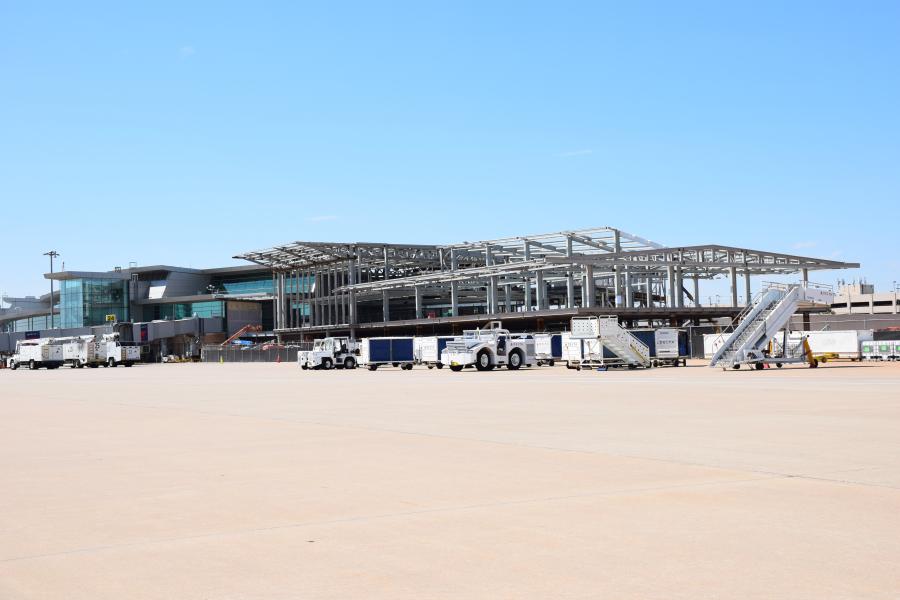 This expansion also will include elements such as angled beams, native stone, wood paneling and stainless-steel that connect the old to the new. The space will showcase two architecturally integrated works of art by local artist Matt Goad. "A certain percentage of the budget was spent on art," Day notes. Terrazzo flooring in the lobby and concourse areas brings back the feel from the 1960s, he indicates, with large medallions and other integrated pieces. A new wood ceiling in the area leading to the new checkpoint adds ambiance.

Large architectural glass panels highlight the story of Oklahoma City in the public observation lounge on the mezzanine floor. Day describes it as "ceramic frit glass." Frit is a ceramic component that can be laid out in a variety of patterns, typically consisting of dots or lines. These patterns can be silk-screened onto annealed glass using frit paint.

Local artwork reflecting the flavor of Oklahoma City wasn't an afterthought; it's an integral part of the design. "Will Rogers [played] such a critical role in our city and its economic growth," said Oklahoma City Mayor David Holt in a press release. "Physically, it's the first impression for most job creators and visitors." He believes the level of service the airport provides has a direct correlation to the city's level of economic opportunity across all business sectors. "This project will have a major positive effect on all the things that make our airport successful, and therefore, it will have a major positive effect on our city's economy."

Oklahoma City is growing at twice the pace of the rest of the nation. According to Greater Oklahoma City: A Better Life, from 2010 to 2018, the city's metro population grew by about 14 percent, with a 1.55 percent annual growth rate that, if sustained, means the population will reach 2 million by 2040.

Forbes ranks OKC as the fourth biggest in the country geographically, at 621 sq. mi. This creates an issue of sprawl that officials are trying to cope with. Meanwhile, the Will Rogers World Airport is trying to keep pace with the steady increase of passengers. Two years in a row (2017 and 2018), the airport set all-time records for the number of travelers, creating a demand for more capacity.

The city's economy has diversified, Day explains. Tourism "is up" and new jobs are coming. Adding flights to serve the burgeoning travel market requires more airplanes, which, in turn, necessitates supplementary gates. In response, the WRWA is expanding to the east, adding more gates to accommodate airlines – and that's just the start.

Other airlines have shown interest in providing service to international destinations, but the lack of Federal Inspection Services required by U.S. Customs to process arriving international passengers has been a hindrance. Because of constrained U.S. Customs and Border Protection resources, U.S. Customs has not committed to an FIS facility in OKC.