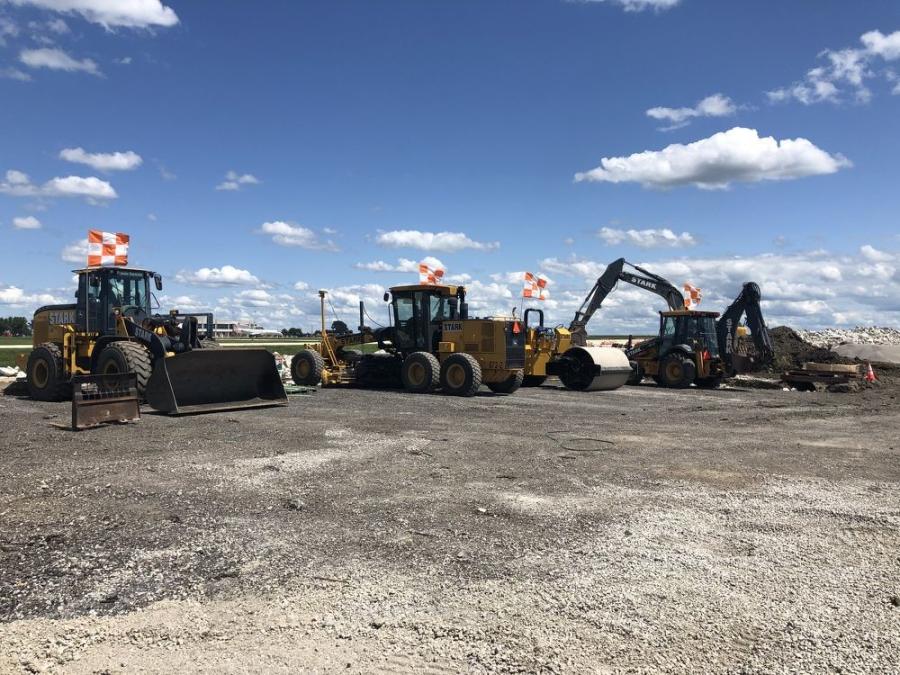 Equipment on site includes track excavators, wheel loaders and bulldozers, along with a host of survey equipment.

Seventy-five years after its dedication, the University of Illinois — Willard Airport is undergoing several major updates adding up to just shy of $20 million. The airport is one of only two commercial airports in the country owned and operated by an educational institution. 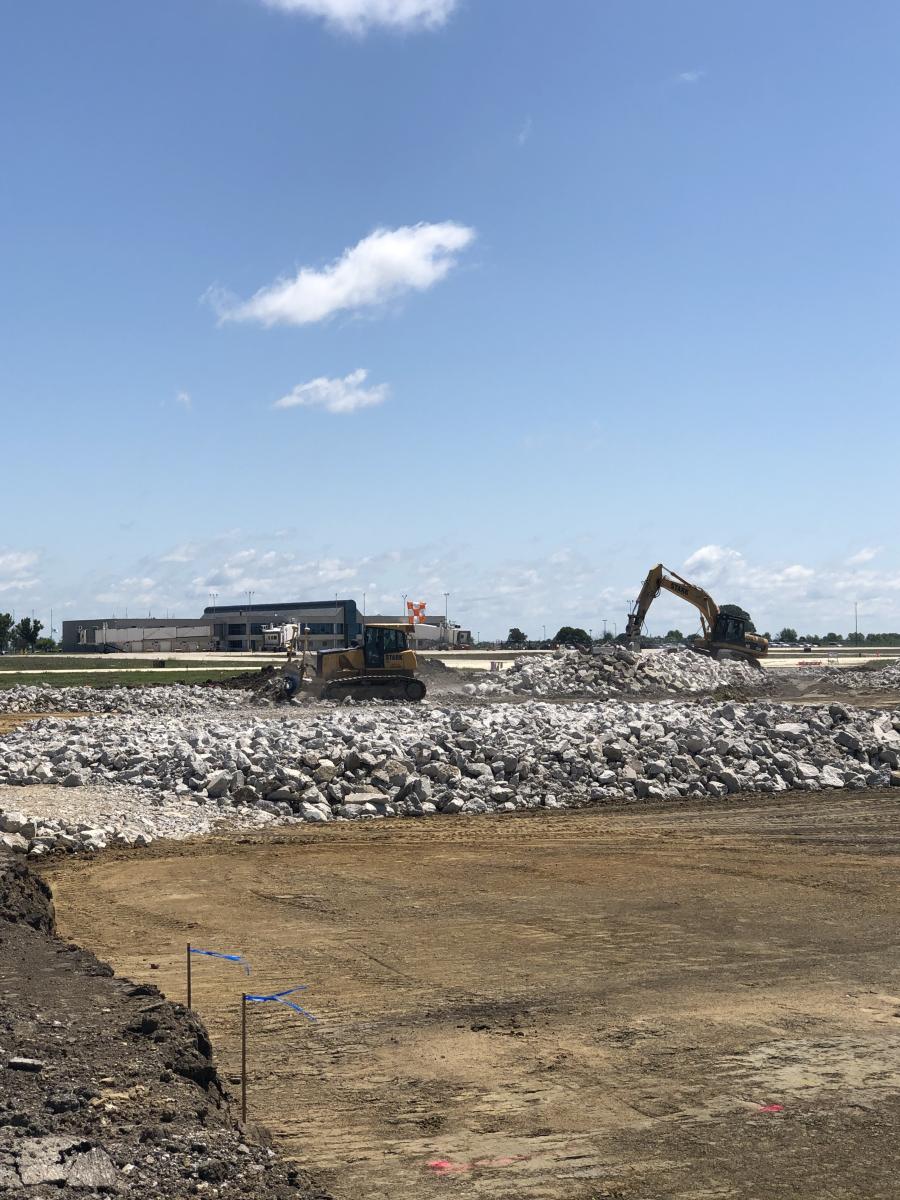 "It's an exciting phase for us because we are seeing these major projects come up," said Brian Ewalt, assistant director of operations and maintenance. "The airport is trying to maintain the customer focus. You build a facility and maintain it, but eventually you have to update it. We've maintained our facilities, but are at the point where we need to update."

Three projects are currently under way, including the rehabilitation of the airport entrance road; the installation of new signage and lighting; and a new taxiway.

"Our entrance roadway was in dire need of rehabilitation," Ewalt said. "We did constant cold patchings, things like that. We heard a lot of complaints from people entering the airport."

Cross Construction won the contract for the roadway, using its own milling machine to grind up the old asphalt. That material was then conveyored onto subcontractors' dump trucks and dispersed with crushed concrete to create a berm along the perimeter fence line. The berm helps prevent wildlife from tunneling under the fence.

The signage and lighting project are being handled by Champagne Signal and Lighting, using directional boring and trenching machines, as well as locating equipment. That project is being completed in conjunction with the new taxiway, Alpha 5.

"That is a project that was identified as a runway safety action team item," Ewalt said. "It solves a geometry problem. They're taking out a runway that has two taxiways that converge into one and redoing it to have one taxiway. The Federal Aviation Administration, through some of their design guidance, does not like access to a runway from a ramp or apron that does not have a 90 degree turn in it. It mitigates against runway incursion."

A runway incursion is "any occurrence involving the incorrect presence of an aircraft, vehicle or person on the protected area on a surface designated for the landing or takeoff of an aircraft."

Stark Excavating, headquartered in Bloomington, Ill., is rebuilding the taxiway.

Equipment on site includes track excavators, wheel loaders and bulldozers, along with a host of survey equipment and one piece Ewalt describes as "pretty unique." 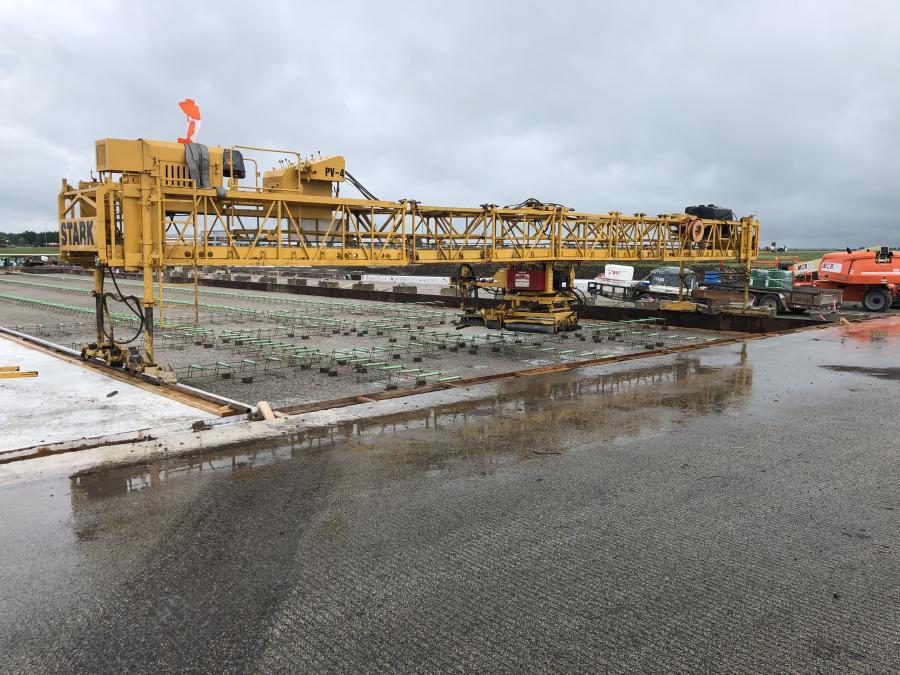 "It's called a Bidwell," he said. "It's a screeding machine to pour concrete. What it does is help screed the concrete as they pave. It runs on a track system and as they pour the concrete with pumper trucks, this piece of equipment screeds it onto the surface of the new taxiway. It's used a lot in bridge deck replacement. I've been around concrete paving and seen several different machines being used, but I've never seen this piece of equipment used before. It's an older piece that they own and use, but it works very well. It smooths out the concrete making sure it's being poured at uniform depth and also makes sure it comes out smooth. The area they are pouring is 49 feet wide; with concrete at least 18 inches thick."

The concrete is then grooved so that contaminants, such as ice and snow, will melt and drain off instead of pooling and potentially causing hydroplaning.

Two additional projects are on the drawing board. One is the rehabilitation of Runway 422, one of two runways used by commercial carriers. The $13.7 million project, slated for construction in 2021, also will include new lighting, signage and underground wiring.

"It's going to be a substantial project," Ewalt said. "It will be very similar to the roadway project currently under way. It will be milled to a certain level, then they will be coming in with new asphalt in its place. The job has been let at the Illinois Department of Transportation [IDOT] level. IDOT does all our project letting and that plays into our governance structure here." 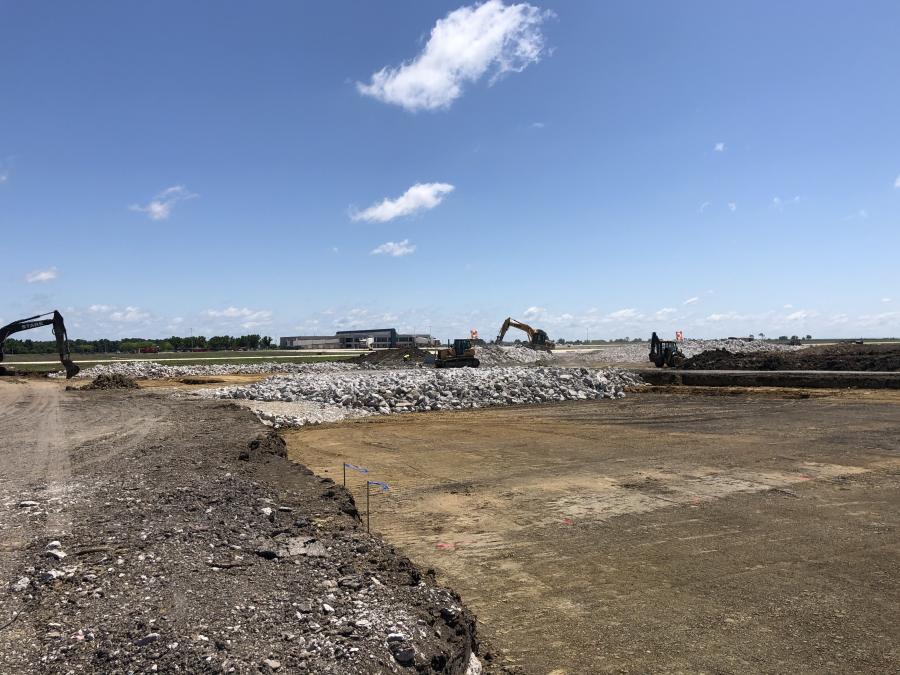 Also coming up, a new car rental facility, currently in the design phase. The project will be funded by a $3 a day fee charged renters and will allow rental companies to wash, vacuum and conduct maintenance on the vehicles. They currently work from a tent and must leave the property for maintenance.

"That project is being done to aid the business flow of car companies, but we also feel it provides a better customer feel," Ewalt said.

One of the biggest issues with so many projects is securing the funding, but work in an airport comes with numerous unique challenges.

"The challenge for contractors is it's not highway work and it's not residential work. It's an operational airport. A lot of requirements exist with that. Not only in operation, but where you can stage equipment, making sure it is lighted and flagged. There also are security requirements. It's a much different environment to work in than any other construction project." CEG