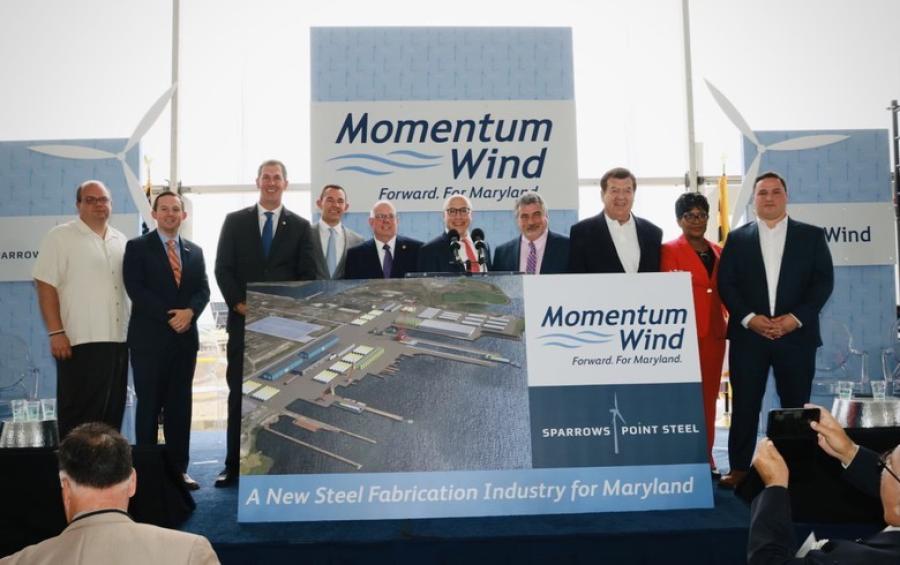 A wind farm developer plans to bring steel production back to Sparrows Point, on Baltimore's southeastern edge, to establish a manufacturing hub to serve the growing wind energy industry.

The one-time home of a massive Bethlehem Steel plant, Sparrows Point is a peninsula with a deep-water port between Chesapeake Bay and the Patapsco River.

US Wind has its eye on kick-starting its plans by using the site to build parts for a proposed expansion of offshore turbines in Ocean City, Md.

The factory would make the towers that anchor wind turbines to the Atlantic Ocean floor. Additionally, it would aim to supply US Wind's Ocean City projects and, longer term, the wind energy market across the United States, the Baltimore Sun reported.

The company signed a long-term lease to convert the old shipyard at the old Bethlehem Steel mill site into its new hub, where work initially would support an ambitious expansion of wind turbines in the waters near Ocean City, US Wind CEO Jeffrey Grybowski said.

"It will be one of the finest offshore wind hubs in all of North America," Grybowski said during an announcement at the site. "We want to do this with good-paying, union jobs based right here in Baltimore County."

US Wind, which holds lease rights to an area that spans about 80,000 acres located 13 mi. east of the beach resort town, has been working on the first phase, called "MarWin," which includes building 22 turbines about 17 mi. from shore, according to the Sun newspaper. US Wind had earlier won approval from the PSC for that stage of its operations.

The firm expects MarWin to generate about 270 megawatts of wind energy and power for about 80,000 homes by 2025.

The wind farm's second phase, named "Momentum Wind," would be four times as large as the first phase, with 82 turbines when completed by 2028. Together, the two phases will be the biggest wind energy project ever proposed in Maryland and would supply the state with 1,200 megawatts of renewable energy.

The entire project would have the capacity to generate 1,500 megawatts of offshore wind energy, or enough electricity to power more than 500,000 homes, US Wind noted. The company needs PSC approval before it can proceed with expansion.

Grybowski added that Sparrows Point Steel, which is proposed as a fabrication facility in the expansion proposal before the Maryland Public Service Commission (PSC), would be housed in as many as six new and rehabbed buildings. The company needs PSC approval before it can proceed with the project.

There, workers will bend, roll and weld the steel towers and foundations, known as monopiles, which will be transported on barges to wind farms under construction. At capacity, the factory could produce 80 monopiles a year, he said.

US Wind estimates the Sparrows Point Steel factory could employ 500 workers at its most productive time. Its existing offshore project is expected to generate 1,300 construction jobs, with another 3,500 jobs estimated for the proposed second phase, Grybowski said.

According to the Sun, he said the wind energy developer plans to invest $77 million at Tradepoint for port upgrades that will allow the firm to bring in large equipment to build and assemble turbine components. The site has key advantages over other East Coast industrial port sites, he noted, including its expansive size and one of the largest dry docks on the coast.

"We think that our MarWin and Momentum will be the first two customers of this facility," Grybowski said, "but we think we will have great prospects to serve the rest of the offshore wind industry."

At the Aug. 3 announcement, Maryland Gov. Larry Hogan and other state and local elected officials touted the return of steel work and thousands of jobs to Sparrows Point in a way that could make the state a clean energy leader.

"Offshore wind presents a once-in-a-generation opportunity for the state of Maryland to expand and diversify our economy and our energy portfolio," Hogan said. "The job creation potential and associated economic benefits for the broader supply chain of offshore wind development is an absolute game changer."

Adrienne A. Jones, the Democratic speaker of the Maryland House of Delegates, called US Wind's plan one of the state's "most impactful and innovative" renewable energy projects, one that would help make the state's goal of 50 percent clean energy over the next decade more attainable.

The clean energy company's plans for the shipyard continue Tradepoint's seven-year transformation of the steel mill site into a logistics and distribution center where some 10,000 people currently work for employers such as Amazon, FedEx, McCormick and Under Armour.

Bethlehem Steel, which had employed more than 30,000 people at Sparrows Point at its 1959 peak, for decades offered middle-class wages and benefits to generations of Baltimore-area workers. The plant closed in 2012 after years of uncertainty and a series of owners.

US Wind said it has signed memorandums of understanding with Baltimore-DC Building & Construction Trades, the International Brotherhood of Electrical Workers and the United Steelworkers union that commit it to hiring union labor for construction and steel fabrication.

Jim Strong, assistant to the director for United Steelworkers, said Sparrows Point is hallowed ground for him and fellow steel workers. He called the announcement "great news for everybody. It is a very emotional day for our union."

"Our members are hardworking Marylanders," Strong told the Sun. "They have the skills, the training and the commitment to do great work for this exciting new industry. We are excited to be part of US Wind's visionary plans to bring steel back to Sparrows Point."

The newspaper noted that US Wind will join another wind energy developer at Tradepoint Atlantic. Ørsted U.S. Offshore Wind recently funded $13.2 million in upgrades at the Sparrows Point site to allow for the transportation of heavy wind turbine components, such as blades, foundations, nacelles, and towers for that company's Skipjack Wind Farm, located about 20 mi. off the coast of Ocean City, and for future projects.

Grybowski said that US Wind's two offshore projects, representing about 5 percent of all offshore wind projects proposed nationwide, would contribute to President Joe Biden's goal of cutting net greenhouse gas pollution in half and increasing total wind power to 30,000 megawatts by 2030.

The size of US Wind's wind energy farms is typical of those being proposed offshore along the East Coast, he added.

"Because of the growth of the industry over the last few years, it's giving folks like US Wind confidence that this market is ready to take off, and we are in a place where we can begin investing in manufacturing capacity in the U.S.," he said in remarks to the Sun.