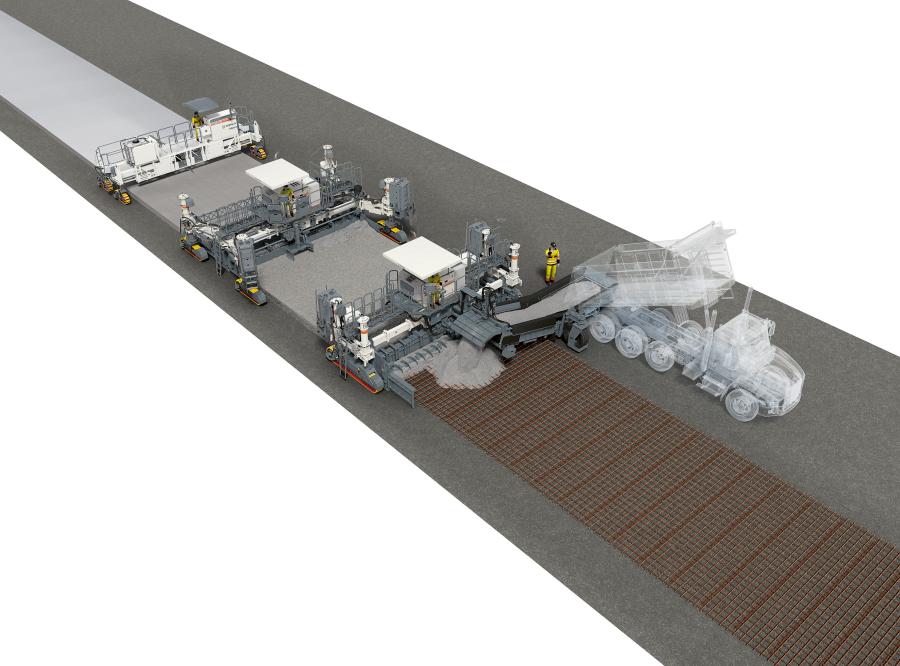 With the new WPS 62i placer/spreader, the intelligent control concept of the powerful, fast folding feeder conveyor guarantees maximum concrete availability for the slipform paver following behind it.

At World of Concrete 2020, Wirtgen Group will show an inset concrete paving train, consisting of two new machines being introduced to the world at the show: the WPS 62i placer/spreader, and SP 124i slipform paver, plus the TCM 180i texture curing machine.

Wirtgen Group will present market-driven solutions for concrete paving at World of Concrete 2020 at its stand C5426. In addition to the simulated paving train, the compact SP 25i and SP 15i concrete pavers will round out the range of inset and offset solutions Wirtgen will display at WOC.

In addition, the AutoPilot 2.0 3D control system – a North American debut as well – will be demonstrated live in the outdoor area B51404.

Visitors to the trade show in Las Vegas will be the first trade audience in the world to get a glimpse of Wirtgen's new WPS 62i placer/spreader with two track units.

Due to its fully modular design with standard hydraulic quick-change couplings, the WPS 62i/WPS 62 can be easily reconfigured and quickly prepared for job site or for transport, which increases the machine's uptime.

The Wirtgen SP 124i/SP 124 is the first slipform paver with a working width of up to 40 ft. (12 m) that Wirtgen has equipped with four steerable and slewing crawler units.

It's also available with an optional new hydraulic rotational drive system with a steering angle of up to 260 degrees. The additional maneuverability of the concrete paver allows the operator to quickly and flexibly adapt the machine to the conditions on the job site.

Its narrow profile and reduced track line allows to pave close to obstacles. In addition, the four crawler units can be switched to rotation mode at the push of a button. As a result, the SP 124i/SP 124 can turn almost on the spot and directly produce the next lane in the opposite direction without wasting any time on repositioning. For transport, the swing legs are hydraulically swung in, further optimizing the transition from paving and decreasing downtime.

As the third machine in the Wirtgen paving train, the new TCM 180i/TCM 180 self-propelled texture/curing machine from Wirtgen guarantees the success of professional curing of concrete pavements.

It's equipped with an automatic spraying and brooming system and directly follows the slipform paver to create the desired surface texture. Finally, the spraying system applies a coating to the fresh concrete surface, preventing it from drying out prematurely. The modular design of the TCM 180i/TCM 180 supports working widths between 13 ft., 1 in. to 59 ft., 1 in. (4 to 18 m).

With its newly developed AutoPilot 2.0, Wirtgen continues to be synonymous with quality and precision in concrete paving. The 3D control system can now create as many offset and inset profiles as required, in the field, even more cost-effectively and precisely, according to the manufacturer.

In doing so, the system either uses an existing data model or creates a new digital data model on site, thereby eliminating the need for a surveyor to create a geodetic data model in advance. In addition, it also eliminates the time-consuming measuring, mounting and removal of stringlines, making the entire operation faster and more cost-effective overall. Wirtgen offers the AutoPilot 2.0 for the SP 15/SP 15i and SP 25/SP 25i models. It also is possible to upgrade machines with the new system.