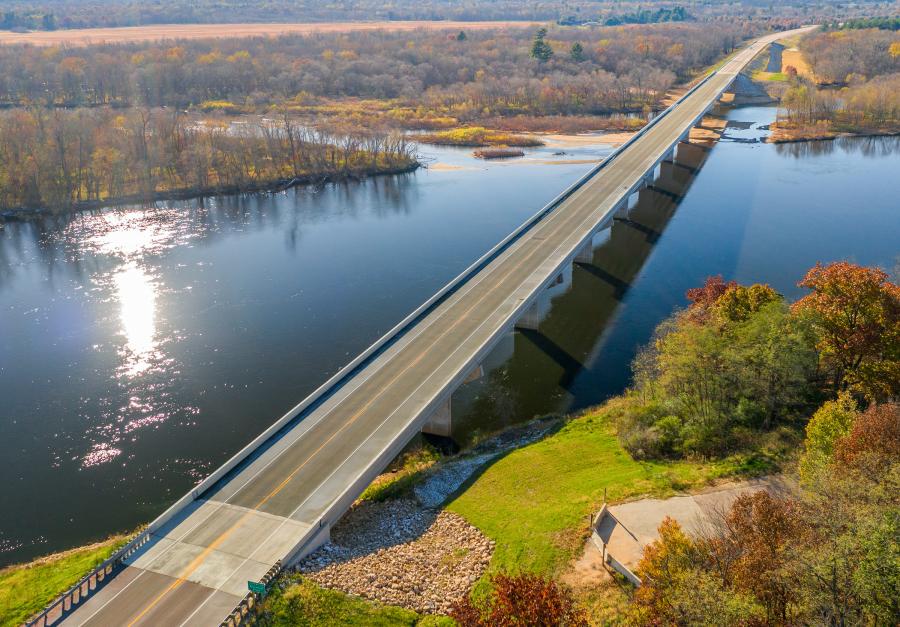 The Excellence in Large Structures Award went to Lunda Construction Company of Black River Falls, Wis., for construction of the WIS 82 Point Bluff Bridge over the Wisconsin River in Adams and Juneau counties.

"Wisconsin is fortunate to have so many top-notch private contractors who help us complete vitally important transportation improvements across the state," said Beth Cannestra, director of WisDOT's Bureau of Project Development. "As valued private sector partners, they deserve praise for the quality of their work and for embracing innovations that help us save time and money."

The Excellence in Large Structures Award went to Lunda Construction Company of Black River Falls, Wis., for construction of the WIS 82 Point Bluff Bridge over the Wisconsin River in Adams and Juneau counties. The former 17-span steel truss bridge was nearing the end of its life.

The new structure is an 11-span bridge built adjacent to the old structure, eliminated the need for a long detour. A significant cost savings to the project was achieved by using Pile Dynamic Analyzer testing to reduce the length of piling needed for the project, resulting in a savings of $846,000. Despite being a complex and challenging multi-year project, the contractor completed the project early and under budget.

Integrity Grading & Excavating Corporation, of Verona, Wis., received the Large Contract Award for its work on the U.S. 18/151 Verona Road Stage 2 and Stage 3 projects, from County PD to Raymond Road in Dane County. The project reconstructed and expanded the Verona Road corridor to provide six lanes and a new single-point urban interchange at County PD.

The Excellence in Small Structures Award went to Lunda Construction, of Black River Falls, Wis., for construction of the U.S. 12 bridge over Allen Creek in Jackson County. The project involved replacing an 8-ft. by 17-ft. stone arch culvert, built in 1884, with a new 110-ft. single span structure, which greatly improved the creek's ability to flow under U.S. 12.

The new bridge had technical challenges and details, which Lunda worked through to deliver an exceptional finished product on time and on budget.

The Excellence in Grading Award went to Hoffman Construction, of Black River Falls, Wis., for the reconstruction of County F from County O to 352nd Avenue in Kenosha County. This project constructed a new, mile-long off-alignment section of County F to improve safety at two county road intersections while also improving horizontal and vertical curves along the route. Hoffman was able to overcome numerous project challenges to complete to project on budget and ahead of schedule.

The Excellence in Asphalt Award went to Northeast Asphalt, of Green Bay, Wis., for a full pavement replacement of 8.6 mi. of U.S. 51 southbound between Tomahawk and Minocqua. Northeast's persistence and problem-solving led to a high-quality road surface and project completion 2.5 months ahead of schedule.

The Excellence in Concrete Paving Award went to Vinton Construction, of Two Rivers, Wis., for work on a 1.5-mi. section of County CA in the town of Grand Chute in Outagamie County. Vinton used optimized concrete mix designs, which helped save more than 240 tons of cementitious materials while still providing an outstanding pavement.