The real genius behind Energy Vault's concrete energy storage tower is its near total reliance on renewable energy.

Fueled by power sourced from wind or solar sources, the structure supports an integrated system for recycling and renewing excess energy obtained from natural resources at their most productive.

And, it does so without the unique topographical features required for hydropower. In other words, when the sun shines or the wind blows regardless of landscape, there's excess energy to be harvested. The tower captures that energy and stores it, without the environmental hazards associated with the use of specialized batteries that not only have shorter duration, but also wind up in a landfill once depleted.

The method of operation is simple: when excess power is generated not by the grid but by sun and wind farms, the tower, located adjacent to those sources, kicks into action. A motor run by that same renewable energy drives the six-armed crane that lifts and methodically stacks individual concrete bricks, which remain stacked at height until power is needed. 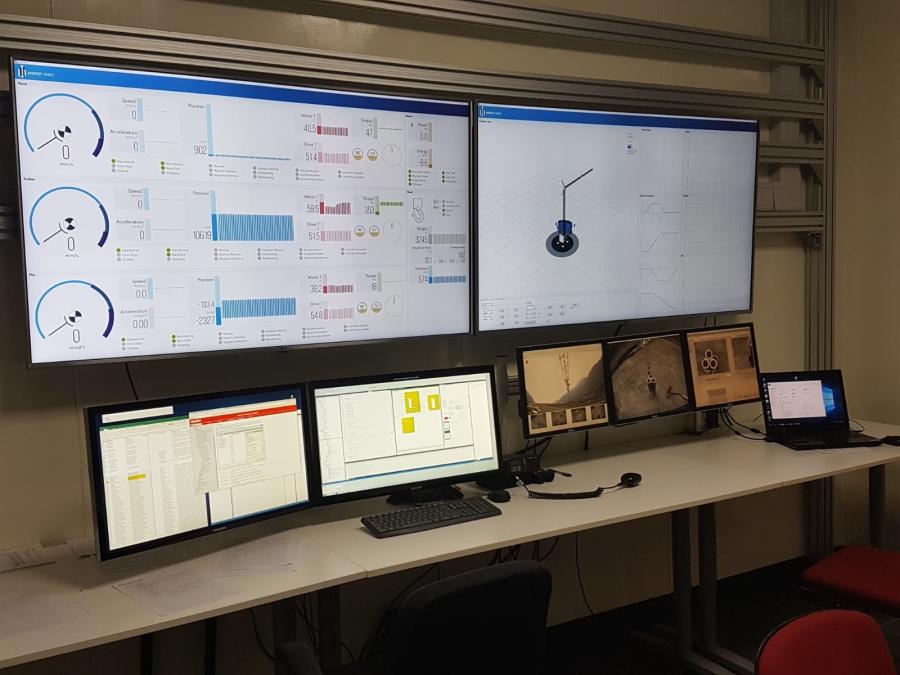 When an energy demand is recognized by the highly specific and detailed series of computer programs that control the tower, the same motor reverses direction to recapture the bricks before allowing the hydra-like crane to lower each, one or more at a time. The resultant gravitational force generates electricity, which then travels to the traditional grid. No staff is needed to run the tower, as it is wholly automated by precise software algorithms. Further, in sharp contrast with battery fueled alternative energy sources, the concrete decay rate is somewhere in the area of 30-40 years versus the usual seven year lifespan of a lithium-ion battery.

“Bill Gross, the founder of Idea Lab who began the project, always had a passion for renewables,” Piconi said. “Within the past 20 years, his work has focused on reducing the costs and increasing the efficiency associated with PV and CSP solar infrastructure as a means of producing sufficient energy from renewable sources to reduce our reliance on fossil fuels. Bill has a remarkable success rate with start-ups; of the more than150 he's begun, 45 have gone public or resulted in a strategic sale.”

In other words, a successful entrepreneur with a passion for renewables decides to tackle the challenge of solar and wind energy storage, since without it, the full effectiveness of alternative energy sourcing will never be realized without substantial subsidies. (Hint: this is why up until now the energy storage industry has relied on batteries or other forms of temporary storage.) 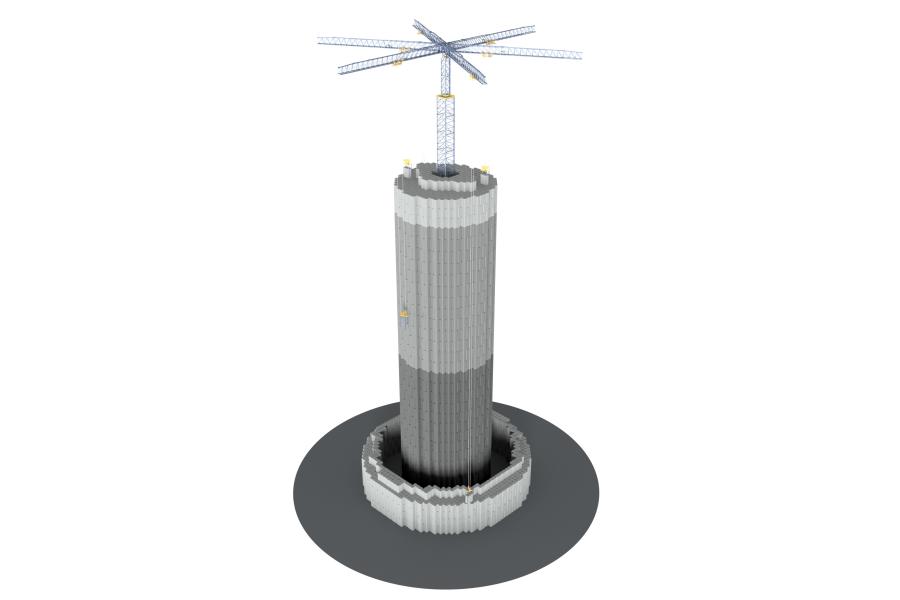 “Storage is key for renewables,” Piconi continued. “We want to offer a more efficient and eco-friendly mechanism for long duration and utility scale renewable energy storage, and to support electricity distribution on an industrial scale as needed by customers. Existing chemical battery solutions are serving some storage needs today but at a very high and environmentally unfriendly cost due to their lack of recyclability and depletion rate over time. Our solution not only utilizes debris and discarded concrete materials that would otherwise be destined for a landfill but also doesn't degrade in storage capacity over time, resulting in a Levelized Cost of Storage (LCOS) of at least 80 percent below currently existing solutions.”

The Energy Vault tower appeals to both public (i.e. government utility/energy groups) and private sector energy market segments. It's also very well suited to emerging markets that are in process of deploying solar or wind infrastructures, yet require very efficient storage in order to reap the benefits of renewable energy generation and optimize distribution throughout the grid, such as in Africa and India. In arid yet sunny or windy locales, all that's needed is at least 300 square feet of land that can be adjacent to solar or wind farms on which to site the towers. The farms will already have a connection to the traditional grid, which will also be utilized by the storage tower to discharge electricity when the sun is not shining nor the wind blowing.

“Right now, construction companies have to pay between from $12-60 dollars per cubic yard to dispose of concrete debris,” Piconi noted. “We offer either a lower cost alternative of, say, $10 per cubic yard, or in some cases, even accept it for free, both options of which result in a negative cost element. We then take this unwanted material and use it, along with specialized cement material to form our concrete blocks. We're therefore recycling throughout the entire building process.”

Of course, there's always the issue of price. Cost per wattage is generally the deciding factor for purchase within the energy storage market. A fully functioning Energy Vault tower can store 35-40 MW hours of electricity, at a starting cost of $200-250 per kWh, with a round trip efficiency level of ~90 percent. In contrast, current lithium-ion energy storage costs are $350-600 per kWh on a capital cost basis at similar round trip efficiency.

However, that's not the whole story, according to Piconi. He points out that there's also the matter of factoring in the total cost of ownership over time of energy storage, which considers the actual economics when utilizing a long term energy storage system This method factors in such aspects as maintenance costs, operating expenses and replacement fees. 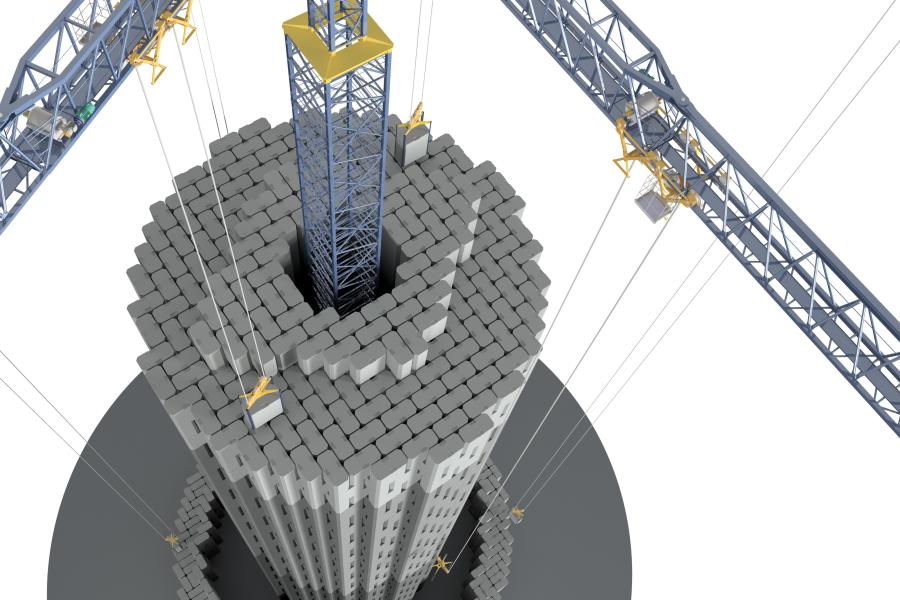 “Traditionally, you hear the initial Capex-only pricing models being quoted on a $ per kilowatt basis,” Piconi explained. “This is the Capex method of cost effectiveness. It estimates the initial capital expenditures required to build and implement an energy storage solution. However, when considering the Levelized Cost of Storage over time in order to factor in the longevity of the storage capacity, operating expenses, maintenance and replacement cost intervals, the battery solutions become at least 80 percent higher.”

Instead, Piconi points to the methodologies originally standardized by the US Department of Energy to measure the levelized cost of storage over time, as well as the most recently published financial models of Lazard's same LCOS models, designed to better capture the total cost of ownership and performance of available energy storage technologies.

This standard, which includes estimates of time spent building, maintaining, and replacing worn parts within an asset, reflects the real value of concrete towers employing the force of inertia versus gravity for energy storage. The disposal of batteries and the need to replace them far sooner than the concrete and gravity storage method employed by the Energy Vault tower add to their cost, not to mention that they're not recyclable when disposal is required.

Piconi also noted that no one within the Energy Vault team believes the concrete towers are the storage equivalent of the second coming.

“We're not saying this is a solution that solves all utility scale storage needs in every locality,” he concludes. “What we have is something that leverages known physics and science, and that is environmentally friendly with disruptive economics that can be deployed today without waiting for a promise of a solution to come. Coupled with the software innovation that enables the full automation of both the commissioning and operation of the tower, we offer a method of storage unmatched in the market today. We've had an explosion of interest in the tower since our debut. So obviously, there's a strong and previously unmet demand for our product.”