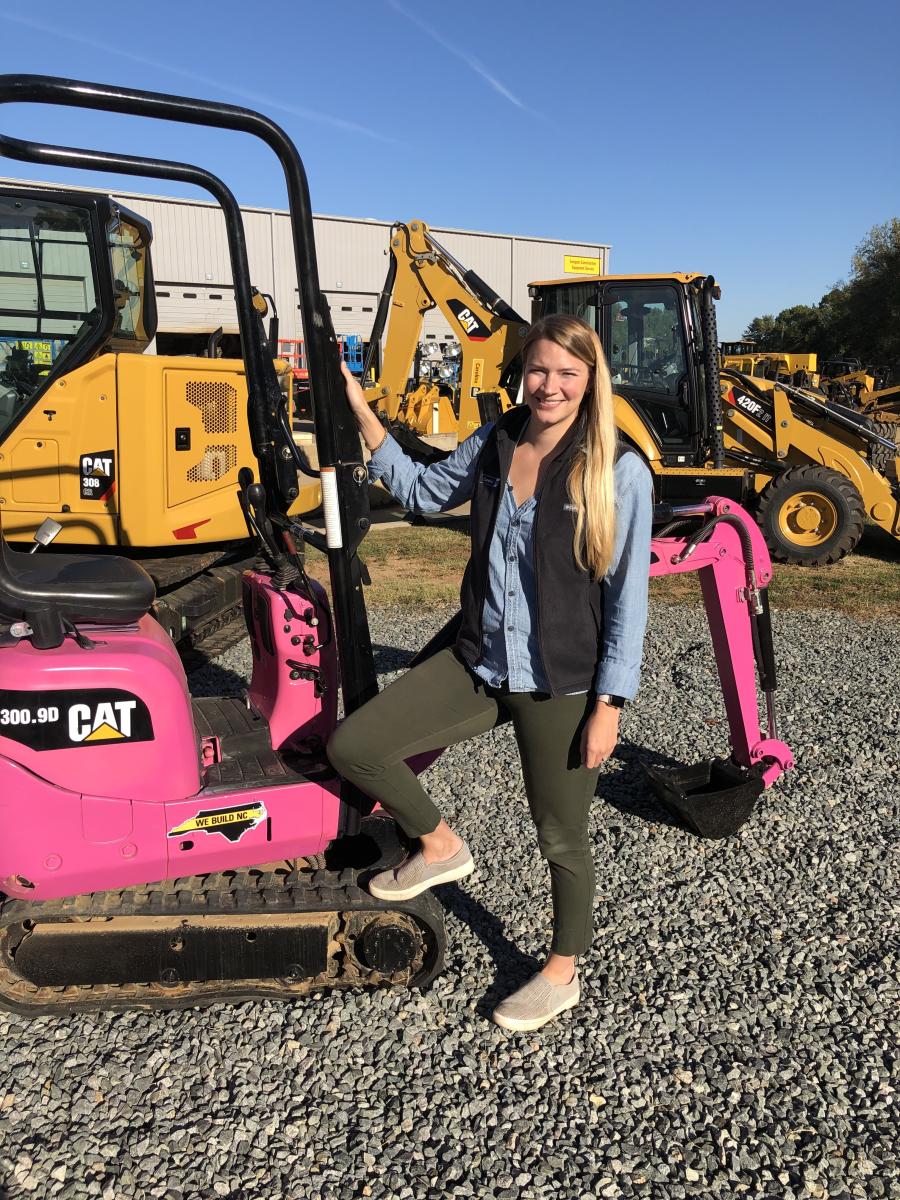 By working at Carolina Cat as a territory sales representative, Chelsea Parker has had the professional good fortune of not having to stray too far from her home base of Swannanoa, N.C. The small western community with a population of roughly 5,000 residents is part of the greater Asheville Metropolitan Statistical Area, which just so happens to be the territory that Parker covers for the Caterpillar equipment dealer.

Being a woman in a male-dominated industry certainly comes with its own set of challenges; however, there seems to a prevailing perception that because women are considered easier to talk to, they have a bit of an advantage in sales-related fields. Meanwhile, Parker believes that any edge she gains in her territory has nothing to do with gender, but rather more a product of being a native herself.

"I feel that people talk to me different when they find that I grew up in Asheville," Parker told CEG. "They trust me more and know I understand the territory."

With that trust in hand, Parker was able to land her first sale in the Asheville market, a Cat 305E2 mini-excavator. On that particular deal with Lewin Baker, Parker engaged in back-and-forth negotiations with the looming threat of competition. Not one to buckle under pressure, Parker, a former scholarship basketball player at Presbyterian College in South Carolina, was able to close the sale thanks in part to her swift response time.

And it's fitting that Parker was able to fend off this particular competitor, which happened to be the same brand that her grandfather (who was also in the construction business) was most familiar with using. Parker's grandfather's vast knowledge of the industry was a good source for her to tap into, especially when she first considered joining the Carolina Cat team as an administrative assistant.

"I saw a job posting at Carolina Cat and I sent it to him, asking what he knew about the company," Parker explained. "He told me if you can get a job at Carolina Cat, you will not want to leave. He said, ‘That is the reputation I know about them.' So that is how I started looking into working there and I landed that administrative assistant job."

Parker started out working with the late Vic Morris, former general manager of Carolina Cat's construction division, although it wasn't long until he saw the potential in his newest employee. According to Parker, she held that administrative assistant role for less than a year before being promoted to an inside sales position where she made sales to walk-ins and cold-called potential customers. Now, 6 years later she serves as Carolina Cat's go-to source for equipment sales in Buncombe, Henderson and Haywood counties.

"We talk a lot about Carolina Cat being a trailblazing organization — and Chelsea emulates that for us. She's a trailblazer as our first female sales rep, and we're very proud to have her move into this new role. She has the confidence and positive attitude to thrive in the position and we are here to support her and invest in here throughout her career," said Amanda Weisiger Cornelson, branch supervisor, South Charlotte. "With this move, and all that she's accomplished in her tenure at Carolina Cat so far, she sets a great example for other women in our company and in the industry. I'm excited to watch her grow and succeed over many years to come."

"If we look here and think about where Chelsea can be in five to 10 years, I think she has a great opportunity to be a well-respected and top-producing salesperson for Carolina Cat," Director of Sales Operations Shae Dwyer said of Parker. "She has determination and perseverance that she will get there. She knows how to work hard. She understands what it takes to get out there every day and work and support customers. She is really going to set the foundation of being a strong role model for males and females, here at Carolina Cat and within the industry. She is fully capable, and we are excited to see what she is going to become."

And to the young women out there who might want to follow in Parker's footsteps, she had this to say: "I think they should do it. It's a great industry to get into, even if it's just being an operator. You can make great money doing so and it is a very needed field right now."

"A lot of people think that construction is dirty and you have to get your hands dirty — which some of the time, is true — but technology is completely changing the industry," Dwyer added. "It's not just in the dirt now, but there's a lot of office tech work that can be done in the company at Carolina Cat. And even the technicians, the first thing they do is plug into a computer. So, it's more technology-driven than it is in the dirt and the grease now." CEG