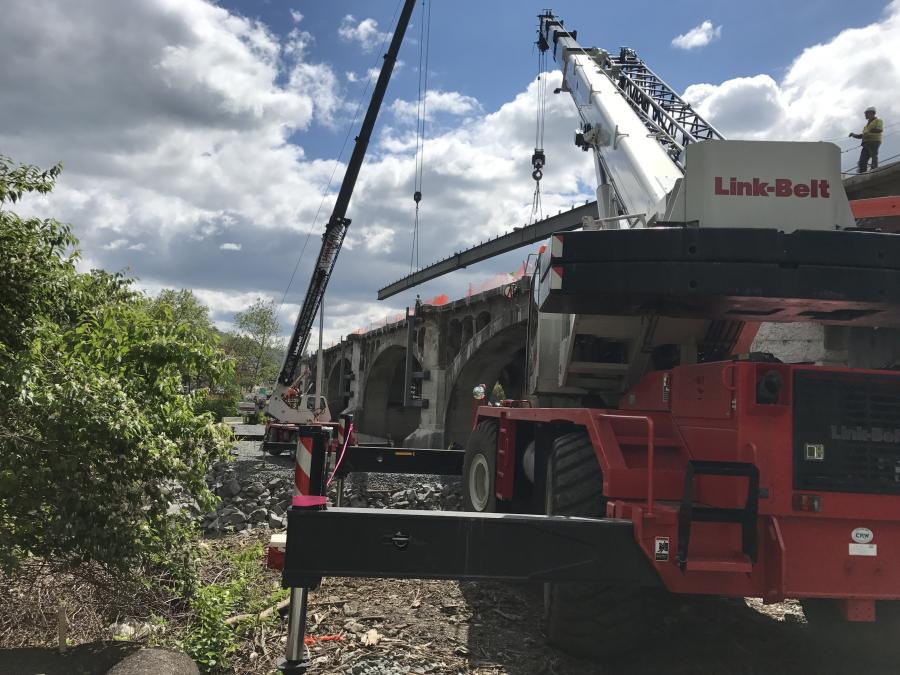 The RTC8080-II is the biggest crane that can be legally hauled in Pennsylvania on eight axles (four truck, four trailer) without removing any counterweight.

J.D. Eckman Inc. is a full-service construction company in Atglen, Pa. The company has its own in-house engineering staff that includes more than eight full-time registered professional engineers licensed in several states and more than a dozen project managers/engineers who have the expertise to handle the most complex projects. The group's expertise in emergency bridge repair has created excellent working relationships with the state DOT's they work with.

The company, which has been family-owned and operated for more than 70 years, started as a small road construction company in 1945 and has grown to more than 400 employees. Even with the growth, it remains family-owned and employee focused.

J.D. Eckman Inc. currently has 1,300-plus pieces of numbered equipment, including everything from trench rollers to a 33 ton crawler crane, pavers, milling machines and excavators.

Jeff Esbin is the company's equipment manager. He has been involved with bridge and road construction since 1994, after spending several years as a mechanic at automotive dealerships.

“My first construction job was as a road mechanic for McMinn's Asphalt in Lancaster, Pa., where I first met Michael Eckman at a paving seminar,” he said. “I was offered a job at J.D. Eckman in 1999 as a road mechanic, and in 2001 moved into the shop as a shop manager. In 2007, the former equipment manager retired and I was asked to take over for him managing the equipment and maintenance.”

In early 2016, J.D. Eckman bid on and received a job near Harrisburg, Pa., to remove loose rock from a high, steep slope, then install mesh to help eliminate more rock slides, and finally install fencing to keep any rock slides from coming onto Rt. 11.

“It was a short-duration, intensive job that required a number of cranes, which we had, but would cut our other jobs short,” Esbin said. “We contacted Wood's CRW Corp. [in Carlisle, Pa.] to rental purchase several rough terrain cranes to cover our other jobs, and they had two RTC8080 series II units that were almost new with low hours.”

Esbin noted that they liked the RTC8080-II because it is the biggest crane that they can legally haul in Pennsylvania on eight axles (four truck, four trailer) without removing any counterweight, and they felt that it had an excellent load chart compared to other manufacturers.

According to Esbin, his operators have only positive feedback about the two RTC8080-II's, and they all love the ease of use with the new Link-Belt Pulse LMI system, finding it very user friendly.

“Neither of these RTC8080-II's has moved from job to job very much,” he said. “The one unit has stayed mostly in the Reading, Pa., area, first on the Buttonwood Street Bridge over the Schuylkill River and Rt. 422, then moving east to the current location on our Penn Street Bridge project, also over the Schuylkill River and Rt. 422. The other crane has mostly remained in the Bethlehem area, which is nice because the capacity means that one crane can remain on the job and service all the needs of the job. Rather than a using a smaller crane of 40 to 50 ton capacity and having to bring in a larger crane from time to time, the 80 ton cranes can handle it all on some jobs.”

CRW is a customer-service driven heavy construction equipment distributor that was founded in 1961 in South Burlington, Vt. According to its website, it excels because it has specialized sales, rental and product support professionals who know how to reduce their partner's equipment operating and maintenance costs, a key to every contractor's success. Its number one goal is to understand its customer/partners business needs and provide the best solutions available.