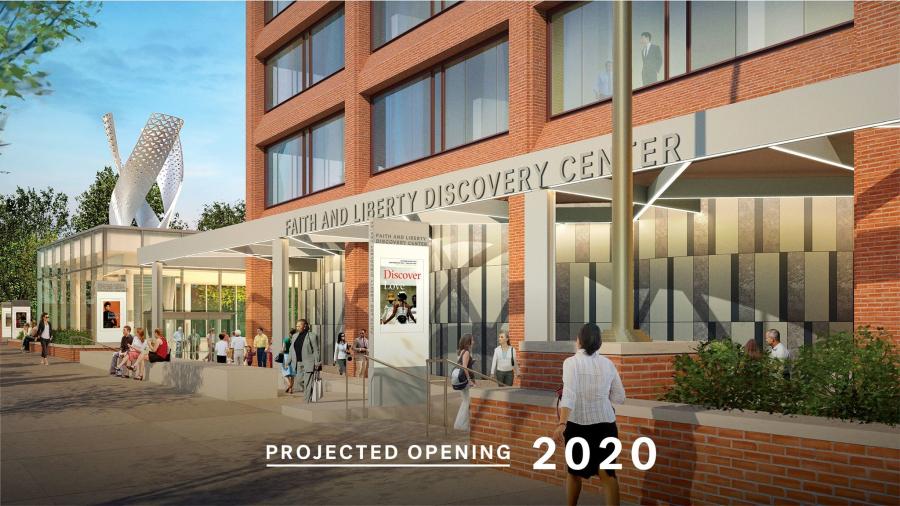 Construction has begun on the Faith and Liberty Discovery Center, and the $60 million attraction on Independence Mall is slated to open in 2020, American Bible Society officials announced.

Expected to draw 250,000 visitors annually, the Faith and Liberty Discovery Center will feature unprecedented technology to demonstrate how the Bible has changed those who changed America. The immersive experience is being led by the award-winning firm Local Projects, which recently spearheaded the 9/11 Memorial & Museum in New York and ranks as one of the most innovative design agencies in the nation. Architectural design is being led by the Philadelphia principals of JacobsWyper Architects' SaylorGregg Studio.

"This will be an exciting experience for people of all faiths and backgrounds," said Roy Peterson, American Bible Society president and CEO. "We want the Faith and Liberty Discovery Center to be a place that unites people, shows how faith has always played a role in our nation, and helps visitors consider what difference faith can make in our lives today."

"This will attract not just visitors, but residents," said Philadelphia City Councilman Mark Squilla. "Regardless of your faith and whether you believe in God, this gives us an opportunity to learn from what people had in the past and what we might have in the future. It adds to the history and the culture and the diversity of our city."

The Faith and Liberty Discovery Center will be built on the ground floor and concourse levels of the Wells Fargo building at 5th and Market streets. A 9,000-sq. ft. glass lobby will extend toward Independence Mall, and it will feature a landmark destination — a two-story iconic sculpture of three intertwined surfaces. The surfaces represent the three documents essential to the founding of the United States — the Declaration of Independence, the U.S. Constitution and the Bible. The core values from these documents are carved into the sculpture's edges, symbolizing the inseparable relationship.

All told, the Faith and Liberty Discovery Center will be 40,000-sq. ft., including an innovation and education center, five galleries and a 3D immersive theater.

Once opened, the Faith and Liberty Discovery Center is projected to add more than $10 million annually to Philadelphia's economy.