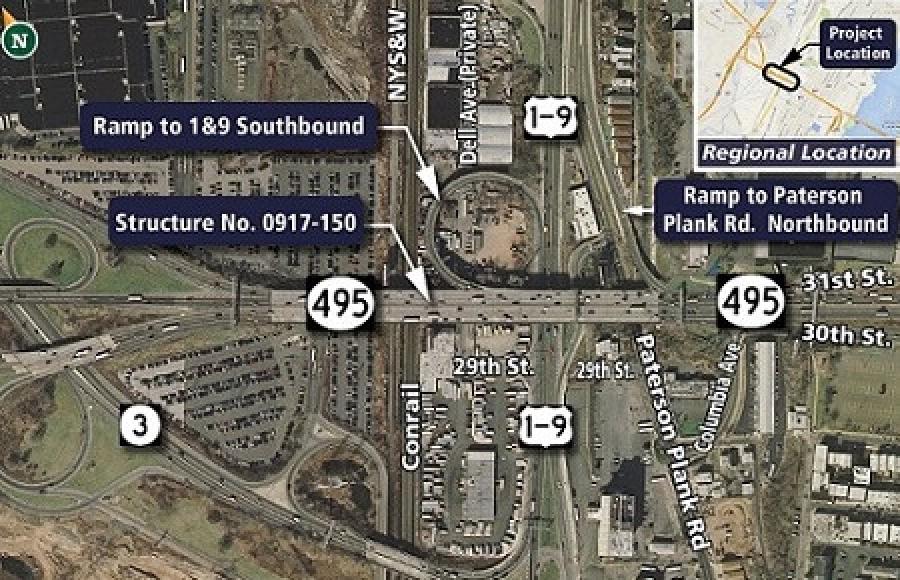 Route 495 itself is an important 3.45-mi.-long, divided urban freeway in Hudson County that connects the New Jersey Turnpike to the Lincoln Tunnel.

Route 495 is four lanes at its western limit where it meets the Turnpike (I-95) at exit 16E, although it is mostly six lanes, with an eight-lane section across the Route 495 Viaduct. The entire road traverses four municipalities: From the west, Route 495 passes through Secaucus, North Bergen Township and Union City, ending in Weehawken Township.

The viaduct was constructed in 1938 and today carries Route 495 traffic over the NYS&W and Conrail rail lines, as well as NJ Route 1&9, Paterson Plank Road and Liberty Avenue in North Bergen.

However, the NJDOT said the bridge is rated as structurally deficient and functionally obsolete. The purpose of the project is to rehabilitate the Viaduct, which will extend the useful service life of the bridge for an estimated 75 years and eliminate the need for potential emergency repairs.

The effort began in September 2017 to repair and rebuild the bridge deck, replace and strengthen the deteriorated structural steel, and repair and paint the substructure. Construction started with work under the bridge and along the Paterson Plank Road/Union Turnpike corridor.

The current second phase of the project began in August 2018 with the closure of a single lane in each direction on Route 495.

Traffic impacts associated with the second phase of construction on Route 495 are expected to last until later this year while the entire bridge deck is replaced.

For instance, the NJ Route 1&9 northbound ramp to Paterson Plank Road was closed and detoured during for a few days in mid-June to allow NJDOT's contractor, IEW Construction Group, based in Hamilton, a few days to safely position equipment, perform a concrete pour on Route 495 westbound and then remove its machinery from the site.

Paterson Plank Road had alternating traffic under Route 495 during the same time, while Route 1&9 northbound travel lanes were not be affected.

Construction will continue to be accomplished in stages to minimize the impact to motorists, the agency said.