Work Continues on Portion of $205M Overhaul of I-95 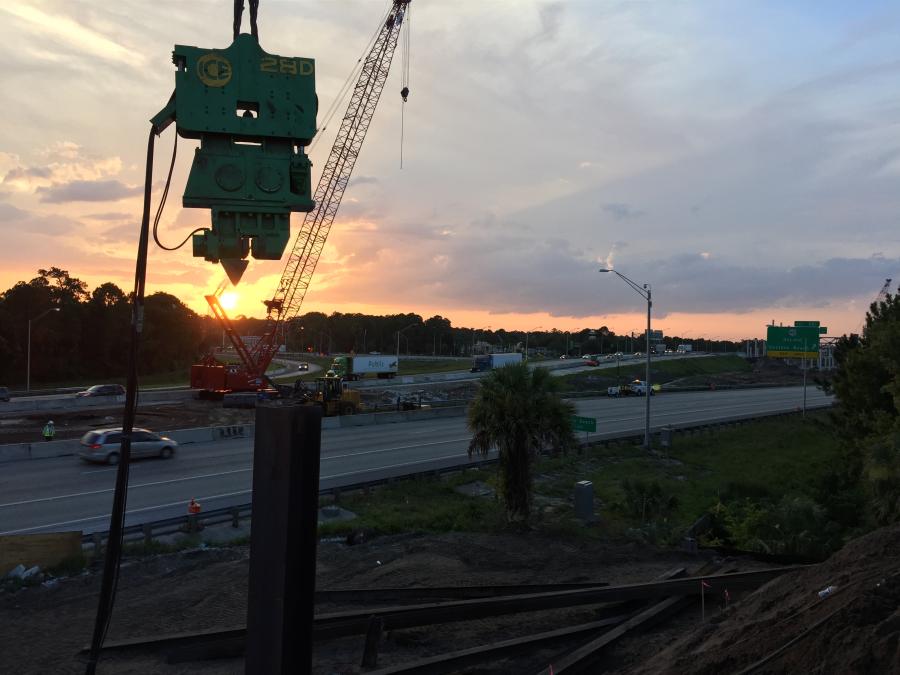 FDOT photo As part of a $205 million overhaul of Interstate 95, construction crews in Central Florida’s Volusia County are working on 13 mi. (20.9 km) of I-95 in each direction. The widening will add two new lanes to the inside of the existing I-95 b

As part of a $205 million overhaul of Interstate 95, construction crews in Central Florida’s Volusia County are working on 13 mi. (20.9 km) of I-95 in each direction. The widening will add two new lanes to the inside of the existing I-95 between Daytona Beach and New Smyrna Beach, and will remake 20 bridges.

“The department and the design-build team have come up with a scenario to minimize traffic shifts throughout the project using innovative ideas,” said Brad Bauknecht, Florida Department of Transportation (FDOT) project manager. “The design-build firm is providing a 10-foot paved outside shoulder along I-95 mainland during all phases of the project. This provides enough room for emergency vehicles to safely reach their destination without causing traffic disruptions.”

Archer Western Contractors LLC is serving as the general contractor on the FDOT project, which got under way in Nov. 2014.

“FDOT is taking the initiative to provide milestones to accelerate the widening of I-95 from I-4 to south of SR 44,” said Bauknecht, who pointed out the project involves widening Interstate 95 from four-lanes to six-lanes from north of State Road (SR) 44 to north of U.S. 92 (International Speedway Boulevard).

The southern project limit will tie into the on-going I-95 widening project to the south (from south of SR 406 to north of SR 44). The project scope also includes the reconstruction of the systems interchange with I-4, I-95 and U.S. 92.

The project reconstructs the I-95 interchange leading to and from I-4 and U.S. 92, which will increase mobility and connectivity. It also will increase safety for merging, exiting and through-traffic. The project will eliminate a left-side merge ramp onto I-95 from U.S. 92, just a short distance to the south.

Additional lanes will be constructed along I-95 allowing vehicles traveling through the area to continue in dedicated lanes and vehicles entering and exiting I-95 to be separated into dedicated entrance and exit lanes.

A significant number of trees were chopped down to create space for ponds and the additional lanes along I-95. Others were removed within the interchanges for aesthetics upgrades, when deemed appropriate to do so. FDOT is providing two percent of the overall project cost towards aesthetics features.

Based on the 2014 average annual daily traffic (AADT) and historical counts report produced by Volusia County, the AADT for I-95 between SR 40 to LPGA Blvd is 74,000. The city of Daytona Beach has many special events, including Speedweek and Bikeweek, throughout the year, which attract many tourists. The project will serve travelers passing through the area and local residents.

The main challenges with the project involve constructing 18 bridges in less than 2 mi. (3.2 km), hurricane and tropical storm weather delays and working around special events occurring within the city of Daytona Beach.

SR 44 work that’s already been completed involved reconfiguring the SR 44 ramp from a merge condition to a stopping condition.

“Modification improvements to the I-95 southbound exit ramp to SR 44 was a successful milestone on this project,” Bauknecht said.

In early July 2015 the Bellevue Avenue bridge was closed for reconstruction. The purpose for the closure was to reconstruct the bridge in order to allow I-95 to be widened underneath. A detour was required for the demolition of the existing bridge. A 10-ft. (3 m) shoulder and a 6-ft. (1.8 m) sidewalk will be added to the new bridge, which is scheduled to be completed in mid-February 2016.

“The demolition of both the Bellevue Avenue Bridge and the I-95 southbound on-ramp were completed ahead of schedule with no major issues or concerns,” said Bauknecht. “This greatly benefited the overall project and the travelers who were affected.”

In late June, the I-95 southbound on-ramp, accessed when going westbound on U.S. 92, was closed for reconstruction. A detour was required for the demolition of the existing on-ramp. A temporary signal was put in place west of the I-95 & U.S. 92 interchange for access to I-95 Southbound.

Pile driving is an essential part of bridge construction, as it provides the necessary foundation for the structure itself.

Within the U.S. 92 and I-95 interchange, there were 122 piles driven within a 52-day window, with full coordination with the Daytona Beach International Airport and the FAA.

All businesses near the U.S. 92 and I-95 interchange were notified prior to beginning pile driving activities and all were prepped for what to expect during construction.

Cranes are needed to drive piles and construct the 20 new bridges/ramps. Currently, there are four large cranes and three small cranes on site, ranging in height from 65 to 180 ft. (19.8 to 54.8 m)

All cranes have been delivered in pieces, eight truckloads per crane and assembled on site.

The Daytona Beach International Airport worked side by side with the design-build team and the FAA to receive the approval for the placement of high cranes within the airspace.

It was necessary to coordinate with the FAA due to the cranes needing to be located within the air space. All crane locations and heights were approved by the FAA. Open communication is maintained between the design-build team, the Daytona Beach International Airport and the FAA.

“The Florida Department of Transportation and the design-build team is working closely with the Daytona Beach International Airport and the Federal Aviation Administration to not disturb air traffic during construction,” Bauknecht said. “The airport was a major factor in allowing the design-build team to drive piles within the airspace, giving a 52-day window for these construction activities to take place.”

Clearing, grubbing and drainage improvements were necessary on the project, which required additional dirt being brought in to the site. Some of the key tasks yet to be performed include reconstruction of the I-95 bridge crossing over Dunlawton Avenue in Port Orange, construction within the I-4 and I-95 interchange, widening of I-95 inward, construction of the ponds throughout the length of the project and aesthetic features and landscaping, which is considered a separate project that will occur after construction is finished.

A total of 13 bridges will be completely demolished and replaced. The I-95 interchanges at U.S. 92 and I-4 are both being fully reconstructed; for a bridge crossing any travel lane, lane closures and/or detours are required for it to be demolished. This protects both the travelers and the construction workers.

Detours were required for the demolition of the Bellevue Avenue Bridge and the I-95 Southbound on-ramp. The new Spruce Creek bridges (eastbound and westbound) are being built in between the existing bridges, so that traffic can remain untouched during construction. Once the new bridges are complete and the road alignment has been updated, the traffic will shift to the new bridges and the old bridges will be removed.

As with any construction project, safety is a major concern.

“FDOT has required temporary concrete barrier walls to be installed within the medians of the interstate to help protect construction workers,” said Bauknecht, who added, “The proposed I-95 lanes move the road inward, away from all residential areas.”

Currently, the project is on schedule. By January 15, existing lanes will maintain existing capacity during special events. The inside northbound travel lane from I-4 to just north of U.S. 92 will be closed for the next two years. The lane will be opened as needed for various events and holidays.

All work is expected to be completed by summer 2018.