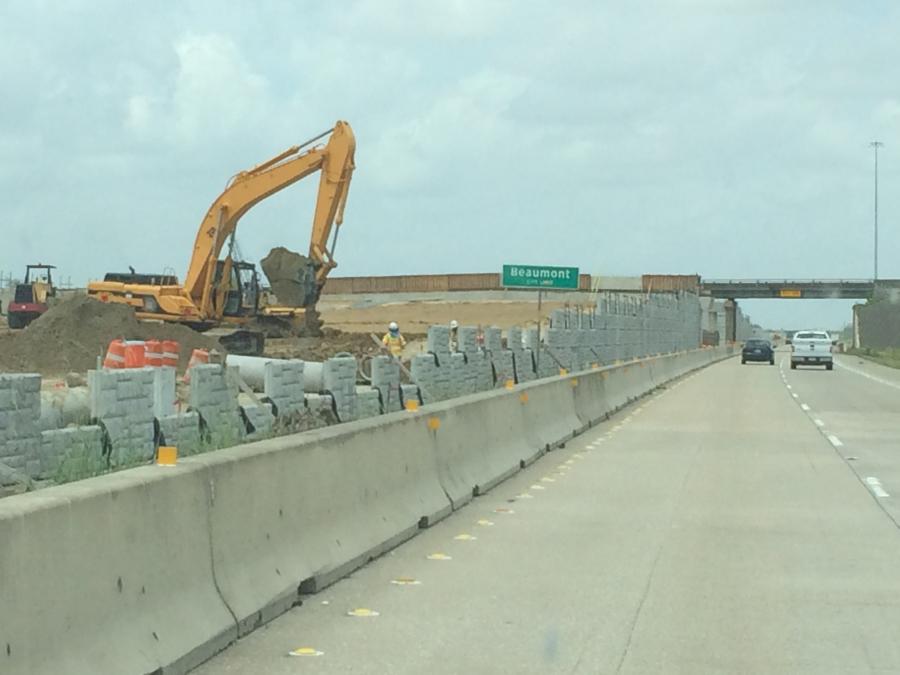 TxDOT photo. Along with replacing the current intersection with an overpass, the project will include two lanes in each direction over Major Drive

Both projects are overseen by the Texas Department of Transportation. Project manager is Kevin Grissom, engineer in training at the Beaumont Area TxDOT office.

Both the Interstate 10-Major Drive intersection and Purple Heart Memorial Bridge were aging and needed to be upgraded for safety and growing traffic volumes. A mix of commuters and truckers use I-10 on a regular basis.

“The Major Drive-I-10 project will increase safety and reduce congestion in that particular area,” said Sarah Dupre, public information officer in the Beaumont office of the Texas Department of Transportation.

The 50-year-old bridge has seen an increase in vehicle traffic to about 80,000 a day.

The new Purple Heart Memorial Bridge is expected to be finished in 2017.

When completed, the bridge will contain three lanes in each direction. Currently, the bridge has three eastbound lanes and two lanes heading westbound.

It will feature an obelisk on each corner with a purple heart etched into the obelisks, she said.

The project will feature 12 subcontractors. All work takes place during the day, with 50 workers on site from more than a dozen trades.

Current work on the Purple Heart Memorial Bridge includes driving pile on the westbound section and installing bridge deck panels and overhang brackets on span 1 of the bridge.

“More than 1,000 cubic yards of dirt is being brought into the project,” Dupre said.

Materials removal also has been a big part of the process.

Removed concrete is being recycled and steel is being reused for other projects.

Freeway ramps are not part of the project.

Current construction includes excavation, installation of concrete panels, hauling stabilized sand for the retaining walls and pouring a flexible base material for the roadway, Dupre said.

Major Drive will be widened to five lanes, two lanes in each direction, with a center turning lane. The Major Drive curve just to the north of the interchange will be slightly straightened to improve safety.

Construction schedule is seven days a week. Work began in August 2015 and is expected to conclude in March 2017. Construction is being conducted in three phases, with the current Major Drive overpass removed as part of Phase 2.

“The project has caused some traffic delays,” Dupre said. “When the eastbound section of the new bridge was completed and opened, traffic congestion was relieved significantly.”