Work on I-20 Bridges Over Savannah River Progressing Between Georgia, South Carolina 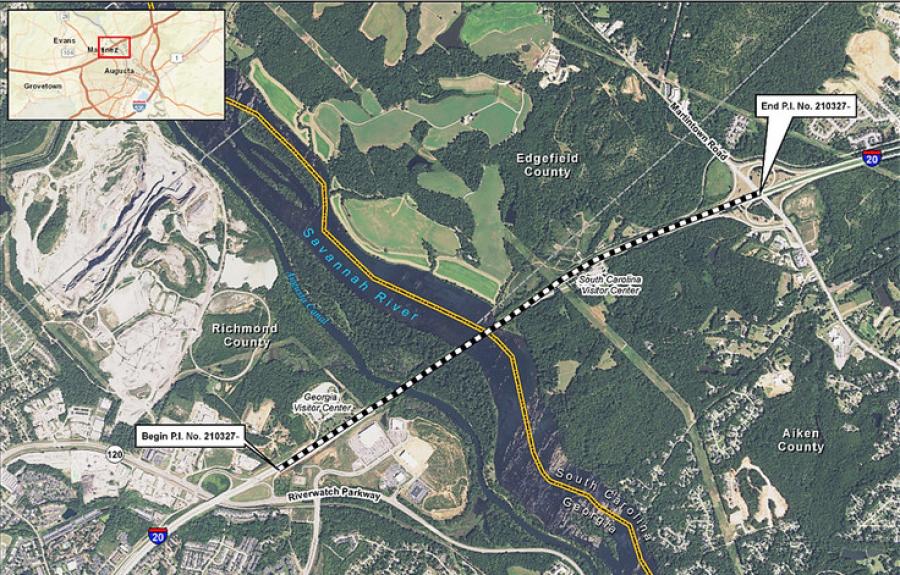 Construction is ongoing this summer on an $82.5 million widening and bridge replacement of Interstate 20 across the Savannah River between Georgia and South Carolina.

The interstate is being widened from four to six lanes between the Georgia Welcome Center in Augusta and Martintown Road (Exit 1) in North Augusta, S.C.

The bridges over the Savannah River and the Augusta Canal on the Georgia side also will be replaced to accommodate the expanded roadway. In addition, a traffic signal will be placed at the Martintown Road/Exit 1 ramp.

Construction began last fall, and the entire project is slated to be completed by the first quarter of 2022.

The contractor is Superior Construction Company Southeast in Jacksonville, Fla., specialists in bridge and roadway construction, with a focus on large design-build projects.

The Georgia Department of Transportation (GDOT), which has taken the lead on the project, is using a design-build method, which combines pre-construction and construction work into one effort. The South Carolina Department of Transportation (SCDOT) also is involved in the project, making the I-20 bridge enterprise the first agreement between the two states for a design-build project.

The GDOT described the replacement of the I-20 bridges as crucial to the safety of motorists traveling over the river. The existing bridges are functionally and structurally obsolete with substandard shoulder widths.

By widening the roadway from four lanes to six lanes, the reconstructed bridges will be better suited to conduct current and future traffic volumes.

Aside from replacing the bridges and widening I-20 from two to three lanes each way across both waterways, the contractor also is adding 12-ft. shoulders to the inside and outside of the roadway so that there is a lot more room to move disabled vehicles out of the travel lanes.

As work has progressed, lane closures and delays have already occurred along the project parameters, with more planned.

Even though there may be lane and shoulder closures, Collins added, detours will never be needed, save an emergency.

Much of the construction since March has included placing temporary barriers along the roadway and clearing and grubbing right of ways, and installing erosion control measures, according to GDOT. In addition, crews under the direction of Superior Construction have worked on access roads to the Savannah River and Augusta Canal, as well as the construction of the Augusta Canal bridge.