Construction has begun on a $524 million arena/entertainment complex in Milwaukee, Wis. 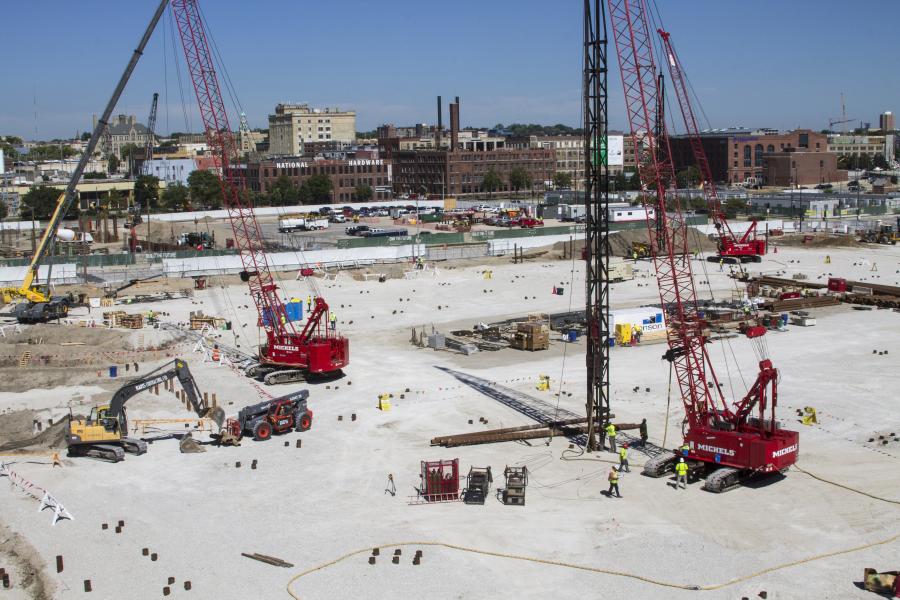 Crews from Mortenson Construction started work on the construction of the $524 million new Milwaukee Bucks Arena/entertainment complex last June, which will become the new home of the NBA’s Milwaukee Bucks and the Marquette Golden Eagles men’s basketball NCAA Division I team.

Crews from Mortenson Construction started work on the construction of the $524 million new Milwaukee Bucks Arena/entertainment complex last June, which will become the new home of the NBA's Milwaukee Bucks and the Marquette Golden Eagles men's basketball NCAA Division I team. The Bucks currently play their home games at the BMO Harris Bradley Center, which was built in 1988.

A new stadium was first proposed by former Bucks owner and former U.S. Sen. Herb Kohl in 2009. Following years of discussion, reviews of design plans, various votes by the state and municipal governments and the securing of financing, Milwaukee city council voted 12 to 3 on Sept. 22, 2015 to approve the construction plan for the 30-acre site, mostly vacant, in the Park East Corridor of the city. The Bucks signed a 30-year lease to play in the new arena last April.

While the new building will have fewer luxury suites and slightly fewer seats, the goal is to offer a more comfortable experience and to serve as a multi-purpose facility that can host events such as Disney on Ice.

"The new facility is designed with the fan experience top-of-mind," said Mark Rosenberg, the Buck's director of communications. "The building features wider, open concourses with clear views to the action below, significantly increased points of sale for concessions and retail to reduce wait times, and a variety of club spaces catering to fans in all levels of the arena. While the seating is optimized for basketball, the bowl can be reconfigured to host a wide variety of year-round entertainment options to cater to fans of all backgrounds and interests."

The Bucks unveiled the first images and details of their vision for the development as part of the ongoing initiative to revitalize downtown Milwaukee in April 2015. In addition to sports and entertainment facilities, the plan is to unite the new arena with construction of residential and office buildings and new shopping areas. The work site, located between North 4th Street and North 6th Street from West Highland Avenue to West Juneau Street, will seamlessly link with active development on all sides, including Old World Third Street, Schlitz Park, The Brewery, the Milwaukee riverfront, Water Street and the Wisconsin Center.

The arena was designed by the Populous and HNTB, along with participation from Milwaukee architectural firm Eppstein Uhen.

"Our collective efforts to revitalize Milwaukee from vision to reality have begun," said Peter Feigin, Bucks president. "These plans reflect the commitment of our ownership, generosity of Senator Kohl and historic collaboration with public officials to build a world-class sports and entertainment destination in the heart of downtown Milwaukee. We're working closely with public officials and the entire community to create long-lasting jobs and economic opportunity in Milwaukee."

The exterior design for the new arena, according to a press release from the team, is inspired by Milwaukee's proud architectural heritage and bold outlook, coupled with the region's natural environment of rivers, lakes and forests. The hand-crafted zinc patina exterior, punctuated by nodes of glass to highlight activity within, will create an iconic architectural image that will anchor the surrounding development.

The arena design features an intimate bowl optimized for basketball viewing with the majority of the seats in the lower level closer to the action while still providing the flexibility to host hockey games, end stage and center stage concerts, family shows, circuses and ice events, as well as open-floor exhibitions. Both the upper and lower levels will load from the top down, creating a more efficient seating pattern free of breaks.

The design features open and transparent concourses and a variety of social spaces with views of ongoing events.

"The hand-crafted zinc and glass exterior wraps the energy of a multi-purpose arena full of social gathering spaces and a new public plaza extends the development as a year-round catalyst for the transformation of downtown Milwaukee," said Brad Clark, senior principal of Populous. "Inspired by the natural beauty of Wisconsin's rivers, lakes and forests, this new Wisconsin landmark will stand out as an iconic addition to the cityscape and seamlessly connect with surrounding neighborhoods."

"Bringing this arena to fruition is certainly the first big step in creating the vision for the arena district neighborhood," said Greg Uhen of Eppstein Uhen, "but it will also serve to represent our city and state in a way that we have not seen before. People will be amazed at how well this new venue enhances the experience for all patrons, not just for world class NBA basketball, but for all events hosted here."

Rosenberg said the Bucks are pleased to be part of the city's revitalization.

"Milwaukee is experiencing a wave of new development unlike anything this city has seen," he said, "and the Bucks are proud to be a driving force in bringing more energy and activity back to the heart of the city. While this development will create a new vibrant community for people in southeastern Wisconsin, it's also going to create thousands of family-supporting jobs. We're proud to be partnering with the city and county on workforce development initiatives that are bringing new opportunities to the members of this community who need them most."

Michaels Corporation, a key subcontractor on the project, is responsible for the pilings and foundations for the arena, as well as the pilings for the new parking structure.

"We performed a series of load tests in 2015 to determine the ultimate capacity of the piles, driving criteria and to satisfy prevailing building code," said Paul Wiedmeyer, Michels senior project manager. "In late summer and early fall of 2016, we installed a steel sheet pile temporary earth retention system around the perimeter of the arena site and used dynamic compaction to increase bearing capacity and decrease settlement by consolidating granular soil that was too weak to support the massive structure. We also drilled 992 closed-end pipe piles at the arena site and 339 piles at the nearby parking ramp site."

Michels completed its portion of the project in fall 2016.

Because soil conditions vary greatly over the four city block site, the use of a "one size fits all" pile length was not economical.

"To create the most efficient design," said Wiedmeyer, "we turned to our in-house Technical Services Group's GIS technicians to plot the soil profile versus the pile locations. The GIS map detailed the length of each pile, which ranged from 20 to 90 feet, so that the pile could be ordered to exact length. The estimated quantity of material varied from the actual quantity by less than one percent.

"We also used deep dynamic compaction to contend with under-consolidated granular soil that proved to be too weak to support the massive structure," he said. "Dynamic compaction is a simple, effective technique for increasing bearing capacity and decreasing settlement. A 10-ton weight is dropped from a height of 50 feet to consolidate the upper 20 feet of soil. We used two cranes to complete a total of 22,000 drops on the 6.5-acre arena site."

To maintain a safe, efficient and orderly job site, Michels used its yard in downtown Milwaukee to store a substantial amount of pipe piles.

For the arena section, Michels used three Manitowoc 10000A-1 cranes, two Cat TL1255 telehandlers and two Liebherr 855 cranes, and for the parking ramp, a Manitowoc 10000A-1 crane and an ADC hammer. The corporation's main yard is less than one hour away from the project, which makes it easy for mechanics to reach the work site rapidly to immediate repairs and routine maintenance.

Cable wear on the cranes and cushion material in the pile hammers were the main wear and tear issues being dealt with.

"Repairs and replacement can be done in the same day due to our skilled mechanics, operators and foremen," said Wiedmeyer. "Our mechanics receive yearly training and updates on diagnostic systems to stay on the latest technology and repair techniques. IT systems on equipment improves interpolation of the data needed to diagnose and dictate when repairs or preventive maintenance needs to be done." — CEG