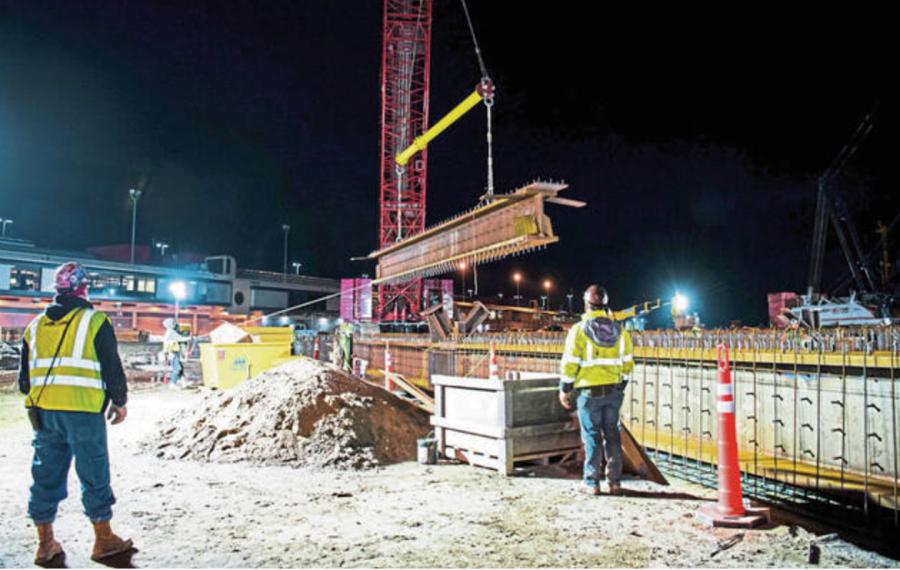 Cranes and construction crews are making headway at Pittsburgh International Airport, as the work to build a new landside terminal is well under way. Airport officials said progress for the $1.3 billion project is right on schedule for the new, upgraded terminal to open by 2025.

"You can start to see the cranes in place as you come onto the property," he told TribLive.com, the online version of the Pittsburgh Tribune-Review, "and from concourse C and D, you can watch all the construction that is going on out there. It is pretty exciting to see."

Hoback counted about 120 crew members working on site to build the foundation for the massive 700,000-sq.-ft. terminal. At the end of March, he said that work was approximately 50 percent complete, adding that in May, the vertical construction of beams and steel columns should begin.

TribLive reported that the new landside terminal is being built between the existing airport terminal and the plane gates, cutting the need for the facility's people mover train and long-range baggage transport because it will abut the existing structure that houses the gates.

Hoback told the Pittsburgh news source that placing the new terminal right against the gates is being done to create a modern design for the airport, and it moves away from when the facility was designed around being a hub for US Airways, which went out of business in 2015.

The design includes high ceilings and walls of windows to take in more natural light, he said. The large space will include ticketing, baggage claim and security checkpoints, as well as more concessions, public art and green plazas just outside of the terminal.

Pittsburgh International saw the decline of its hub status in the early 2000s, and air traffic declined dramatically for about a decade. In recent years traffic has rebounded, but not to hub levels, according to TribLive.

Hoback said, during its peak, the landside terminal project will provide 1,500 construction jobs, 14,000 direct and indirect jobs total, and $2.5 billion in economic activity.

Nearly all the 131 caissons being drilled on the site are finished, he explained. After that, shafts will be inserted into the deep holes until they hit the bedrock under the terminal.

In addition, crews are placing 50-ton steel girders for the main foundation of the new facility — each of which are 80 ft. long, and manufactured at Sippel Steel in Ambridge, Pa.

Placement sometimes requires the airport to shut down the people mover for short periods of time, but Hoback told TribLive that conveying passengers using bus transports has already proved to be a success. He added that the people mover is only shuttered late at night and usually just affects passengers arriving on late-night flights.

A total of 25 steel girders will be placed on the site, and only three of them are built over the people-mover tunnels. Brief train closures will result from their placement, Hoback said.

"What's great about how we are building this project is there are very few, minimal impacts on the day-to-day [operations at] the airport," he added.

Vertical Construction on the Rise

Cranes have been moved to the new terminal site, and, in less than two months, passengers and drivers approaching Pittsburgh International should start to see the skeleton of the new facility rising from the earth, TribLive noted.

Hoback said the terminal's gigantic steel beams are split at the top to look like trees — known as "tree columns" — and should be erected beginning in May. Additional vertical construction of the terminal's exterior will follow.

During April, construction will begin on the multimodal center to the northwest of the new terminal. It will include rental car facilities, new roadways and a 3,300-space parking garage. Crushed and recycled concrete from the demolition of a few current facilities will be used as part of the construction of the center, according to Hoback.

Each of the new airport facilities are to be powered by five onsite natural gas generators and 9,000 solar panels that were built at the top of a nearby landfill. The new power grid already has been brought online, and the main electrical grid will serve as an emergency backup.

Hoback revealed to TribLive that the entirety of Pittsburgh International Airport has functioned efficiently off the electrical grid since June 2021.