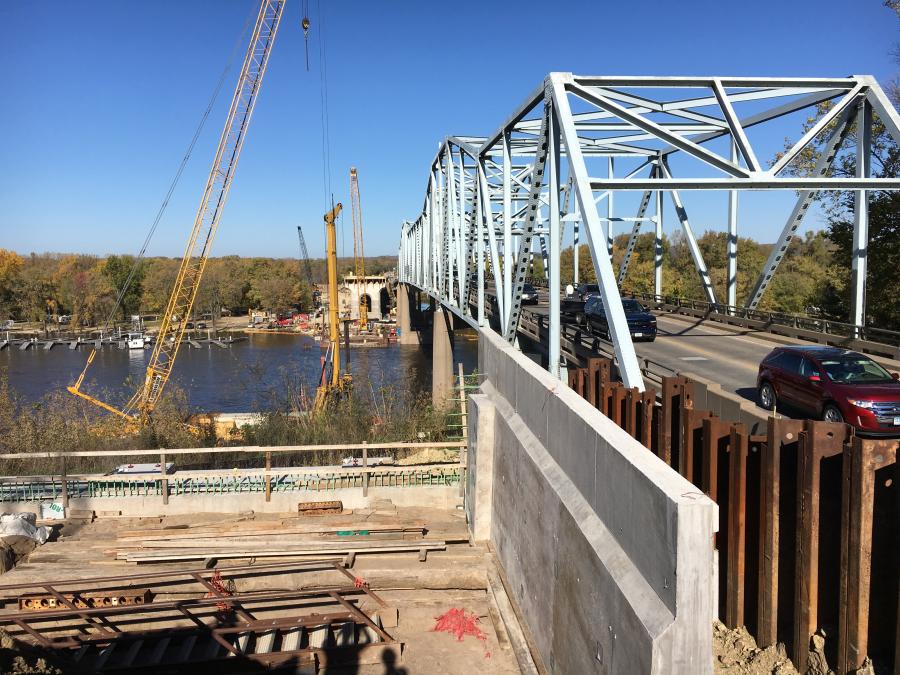 Zenith Tech has American and Liebherr cranes stationed on barges and land to hoist bridge girders in place. (MnDOT Photo)

Finally, after a two month lay-off caused by high river levels, iron workers recently returned to work raising a new bridge crossing the Mississippi River between the city of Red Wing, Minn., and the western shoreline of Wisconsin.

They went to this schedule to stay on top of the girder work as much as possible after the National Weather Service released a record breaking flood forecast for the Mississippi River and its tributaries in late February.

The accelerated schedule helped. Despite losing work days earlier in the year from fighting bitter cold temperatures and waves of heavy snow storms that continued into March, iron workers made good progress. After hoisting girders since early January, just the span over the main river channel remained to be connected.

There was no break in the moisture, though. Rains through May kept river levels high. As June approached, iron workers could not yet get back to work. 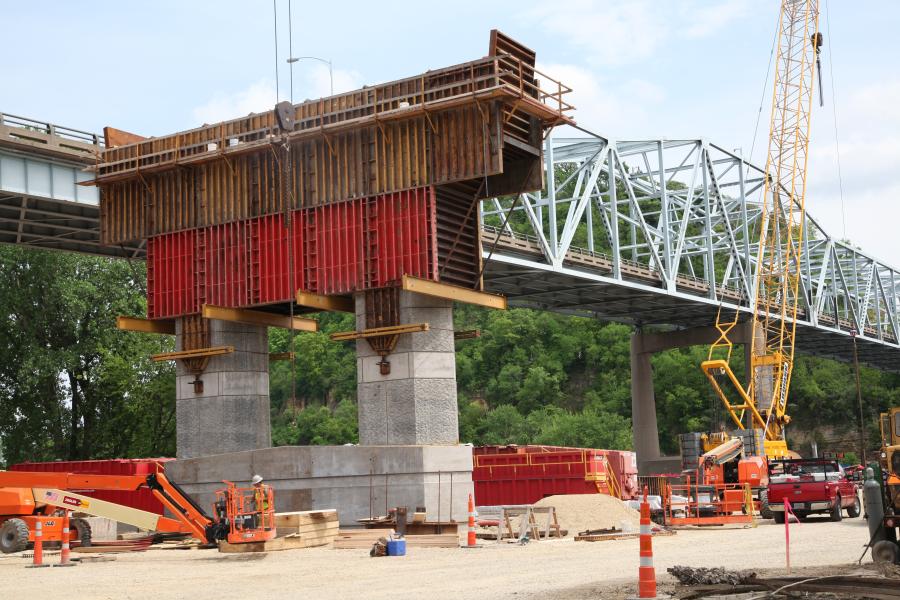 MnDOT awarded the $63 million contract to Zenith Tech, one branch of the Walbec Group. Based in Waukesha and Rothschild, Wis., the company specializes in heavy highway and industrial construction.

Both agencies flirted with similar, but much less benign conditions last spring and summer that brought on higher river levels and put a kink in the early spring 2018 project schedule.

"The high water last year prevented the contractor from working on the drilled shafts for piers one and two and delayed filling the surcharge for the new road connection on the Wisconsin side of river. It wasn't brought to full height until last September. So, we're hoping it settles out to get that north approach done on time," said Mark Anderson, MnDOT project engineer.

The scope of the project includes the reconstruction of the Eisenhower Bridge, a through-truss bridge 1,631 ft. long and 35 ft. wide, which stands 65 ft. above the river channel.

Local utility and street improvements are part of the construction package including the rebuild of the button hook ramp in the city of Red Wing that connects TH 61 and a local arterial to the new bridge.

Before work began on the Minnesota approach to the new bridge, MnDOT acquired private property in that area and removed several buildings to make room for the new Minnesota connection.

The existing and iconic bridge, noted for its above deck steel truss, opened to traffic in 1960 and needed to be replaced. Over the last 60 years, it has carried millions of vehicles, out lived its capacity and shows the wear and tear of its age. The latest traffic study showed that 13,000 vehicles cross the bridge daily.

While iron workers were off the clock, land crews continued to make good progress through the wet months. 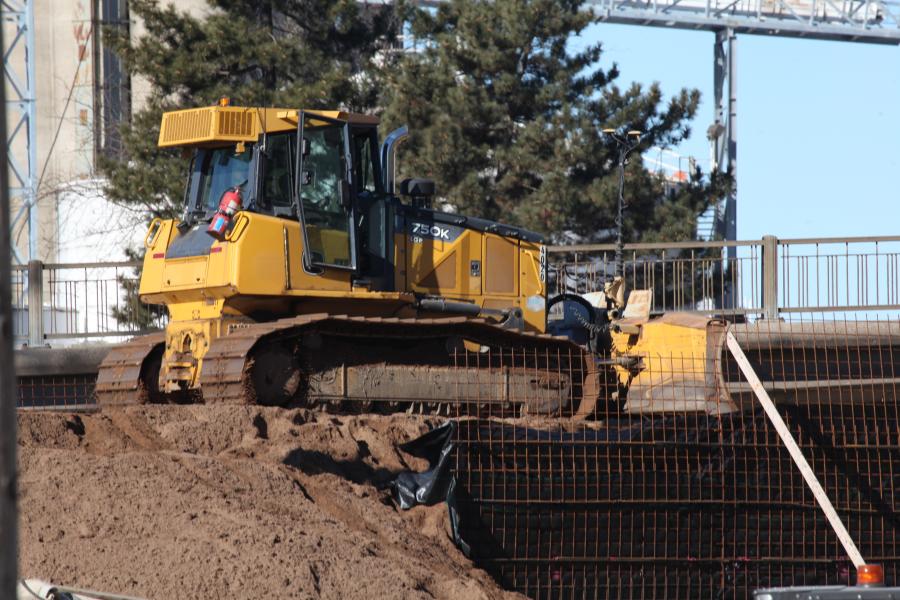 Retaining wall work continued as well as pouring concrete for two bridge decks at the Red Wing connection to the bridge while concrete pours began on the bridge deck on the Wisconsin side of the river. Most of the local street and utility improvements are nearly completed.

Time is still critical because the river is now open to barge traffic. With an active shipping season underway, "we'll have to get some closures for the equipment to sit on the main channel," Anderson said.

Despite the weather challenges capped by a 4-in. rain fall in the Red Wing area in late May, MnDOT and its contractor are still shooting to have vehicles moving on the new bridge by the fall of this year, Anderson said.

On the Wisconsin side of the Mississippi, the existing road geometrics will remain the same but reconstructed to fit in with the alignment and height of the new bridge.

The tub girders are trucked in from Vertias Steel located in Eau Claire, Wis. To span the first section between the bridge abutment and pier one on the Minnesota side of the river, crews constructed a temporary truss bridge and operated winches to launch and guide the first set of girders toward pier one.

Cranes stationed on barges anchored in the river are now hoisting the final tub girder segments in place. The hoisting activities on the Wisconsin side of the river occurred on dry land.

The city of Red Wing is a quaint river town located in the bluff country of southeastern Minnesota with 25 properties listed on the National Register of Historical Places. Barn Bluff, a domelike mound looms almost 300 ft. above the city very near the bridge and is equally iconic as the bridge and a popular tourist attraction.

Vibration monitoring will be a big part of the engineering during construction to prevent Barn Bluff and the surrounding historic structures from excessive construction vibration activities throughout the project site. 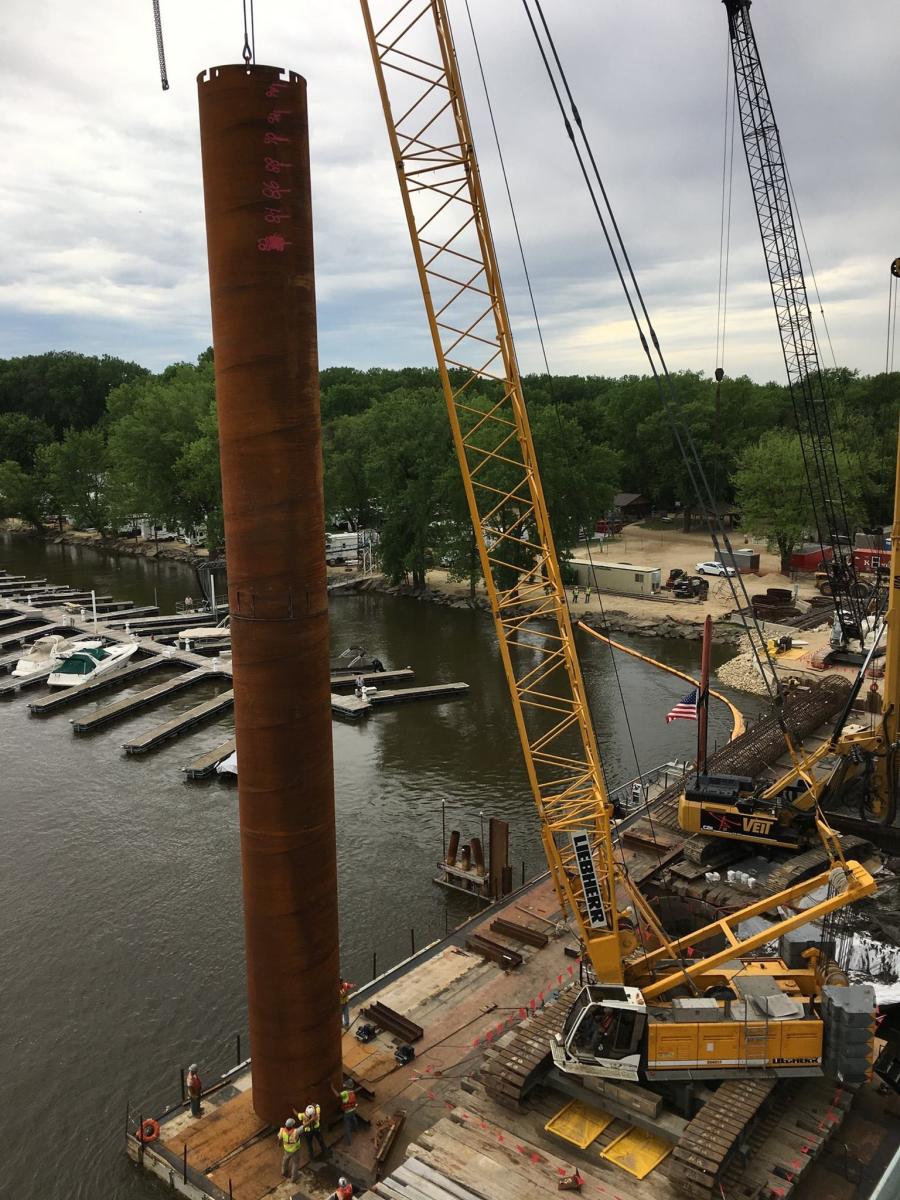 Among the amenities for the new bridge, the "lighting balance will be intentionally reduced to minimize light pollution to the environment and will tie into the ornamental railings. There will be lights on the pillars and wash lighting to outline the bridge shape," according to the MnDOT website.

Even the short mayfly hatching season in early summer came into play for the design of the new bridge.

Local authorities will control the light switch to turn off the bridge lighting to prevent attracting the pesky bugs from covering the bridge deck and creating a dangerously slick road surface for vehicles.

Equipment on the site includes Liebherr and American cranes, JLG lifts and Cat dozers and excavators.

SPE Inc. out of Little Shute, Wis., is supplying the iron workers for tub girder work and High Five Erectors out of Shakopee, Minn., is supplying labor for tying the rebar.

Prior to drilling any shafts to support the bridge foundations for piers one and two, MnDOT specified that the contractor drill a ‘technique shaft.' This was a trial run at drilling the bridge shafts to test and validate the construction methods and materials proposed by the contractor to build the first pier standing very near the shoreline and pier two standing in the main river channel.

A bit of detailed construction, testing and labor went into this effort.

The technique shaft contained an outer steel casing with a rock socket imbedded into the bedrock below the river. A reinforcing cage filled with concrete was built inside the casing, according to information provided on the project website.

A major concern with drilled shaft construction in wet conditions is the formation of voids the project web site noted. These can occur in the final concrete shaft structure around the reinforcing bars or can form from a poor consolidation of the concrete caused by sediment migrating into the concrete during a pour.

Veit Construction, which has offices in Minnesota, North Dakota and Wisconsin drilled the 96.5-ft. technique shaft. Veit crews operated an EK300 rig supplied by CZM Equipment out of Pembroke, Georgia to drill the shaft. This rig can generate up to 253,000 ft.-lbs. of force. 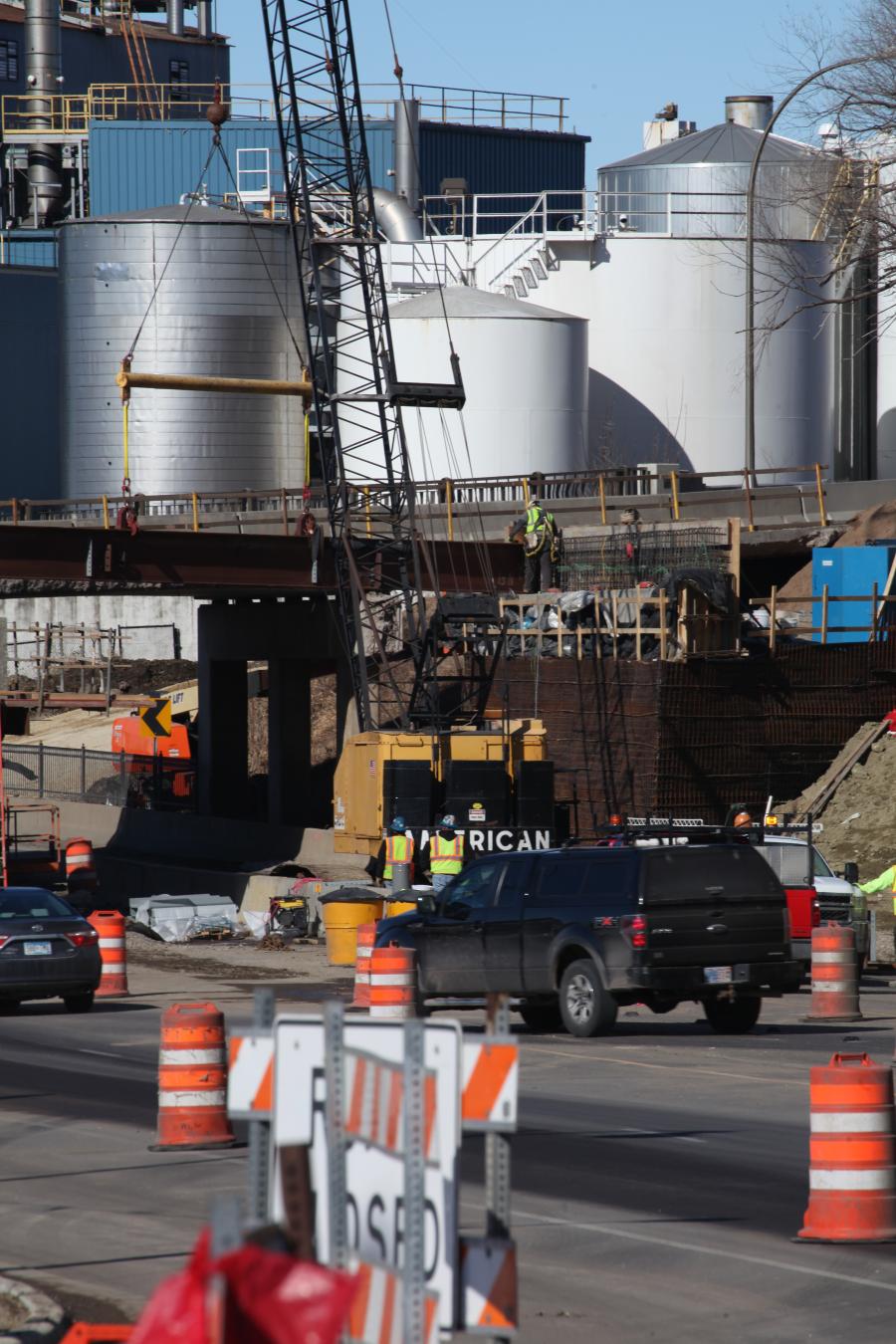 Veit field workers built a coffer dam to keep the work area dry and used a combination of a self-consolidating concrete (SCC) mix placed by the tremie method and poured a slurry mix to stabilize the drilled shaft.

Test results concluded the technique shaft showed very little or no problems with the work and material. According to the project website, "based on the integrity testing, a very high quality shaft was constructed and only minimal changes are in order for the permanent drilled shaft construction."

Anderson added to this conclusion by saying that MnDOT was pleased with the construction of the bridge to date and with the quality of work done by Zenith Tech and its team of sub-contractors.

Construction crews mobilized in the summer of 2017. Early on, work focused on building the piers, the street and utility improvements in the city of Red Wing and trucking activities for the build-up of the surcharge on the Wisconsin end of the bridge to carry the new road connection there.

By the spring of 2018, residents and motorists saw above ground progress. In spite of the high water and wet conditions that spring, bridge crews had nearly completed the four piers and abutment on the Wisconsin side of the river.

By the end of last year, all the piers were ready to carry the girders.

Temporary lane closures, detours and off-peak work hours have been a part of this project. With the nearest river crossings over 20 mi. upstream and 30 mi. downstream, much effort was put into an up to date communications plan to keep local residents, transit companies, truckers and commuters informed on traffic changes or disruptions. 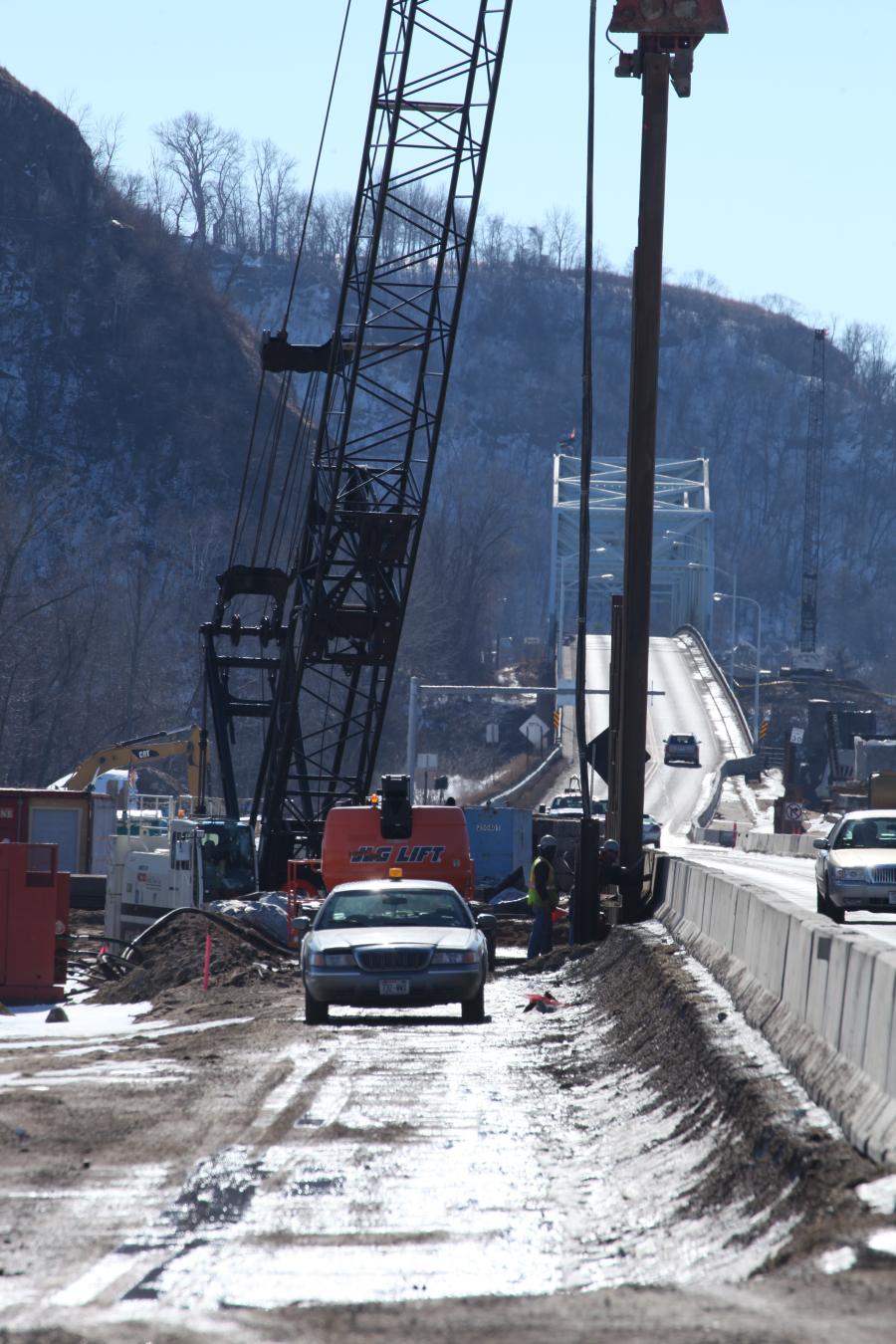 "Red Wing is a commerce and employment center for its region, both for Minnesota and across the river in Wisconsin, while also being a major tourism center.

"We focused on ensuring people who live in Red Wing, as well as those who are employed in Red Wing, but commute there from both sides of the river, were able to stay updated on the progress and any traffic impacts," said Michael Dougherty, MnDOT public information officer.

Facebook and email updates to more than 5,000 people who registered for them have been helpful in answering questions and monitoring any issues, Dougherty said; adding that project manager Mark Anderson and Red Wing city engineer Jay Owens show up on a local community television update each month.

Even though the remaining hoisting work has been delayed because of the flooding, area citizens and commuters are seeing the final pieces of the bridge come together.