Work Under Way on $15M Project in Arches National Park 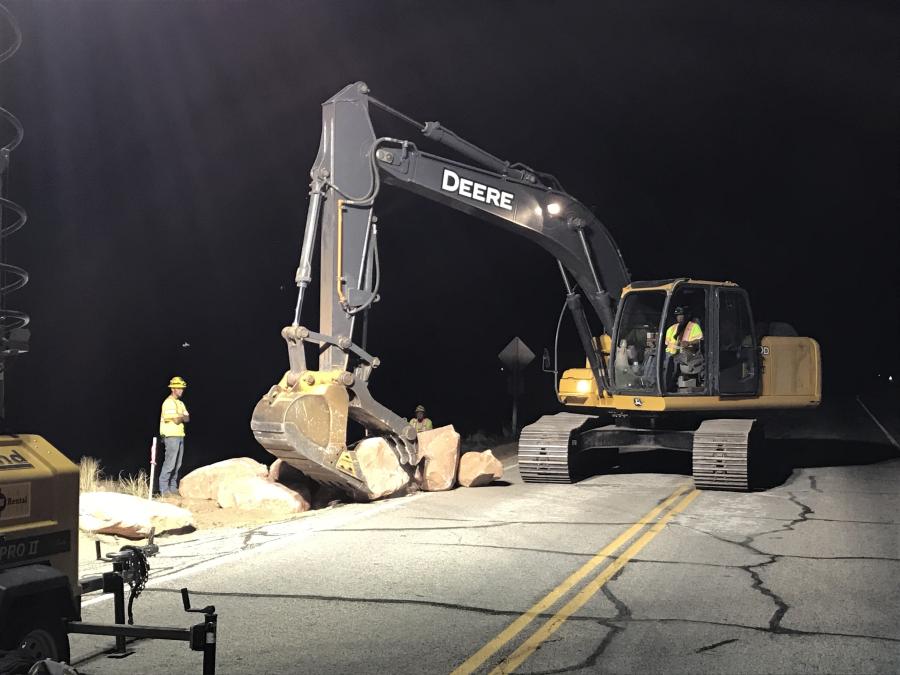 Work is under way on a $15 million project to reconstruct all paved roads and pullouts in Arches National Park in Moab, Utah. Construction spans 26 mi. of roadway.

Campground roads, housing roads and parking lots would not typically be part of reconstruction work, but additional funding has been secured to reconstruct the Devils Garden campground road, the residence road and the maintenance yard parking area.

Construction started in March and continues through November of this year. Work on the entrance road portion of the project is expected to be completed by Memorial Day weekend May 27-29.

Work will be done in phases, starting with construction on an inbound lane from U.S. 191 to the entrance booths and a roundabout at the entrance to the visitor center. Construction will be done at night and no camping is allowed in the park until the project is completed.

The project is paid for by the Federal Highways Administration program.

In what is known as a 3-R project (resurfacing, restoration, and rehabilitation), workers will reconstruct all paved roads and pullouts in Arches National Park.

The Federal Highway Administration designates 3R projects as a means of replacing public land agencies' roadways when they become worn and outdated. The existing park roads were built from 1957 to 1962 and designed for approximately 75,000 visitors per year.

Arches National Park's visitation exceeded 1.5 million in 2016, so the roads and pullouts are in need of upgrades to accommodate the dramatic increase in use.

One of the major 3R project stipulations is that the majority of the project must be within the existing roadway prism.

The roadway prism is defined as the total cross-sectional width of the entire disturbance when the road was constructed. As an example this would be the width from the top of a cut to the bottom of a fill slope and the construction is bound by these limits.

There are exemptions for the work to be outside the limits, but almost all of the work at Arches will be within the limits.

Current construction includes building roadway within the first 10 mi. beginning at the entrance and stretching northward. In addition, the entrance road leading into the park is being rebuilt and crews are constructing an additional entry lane.

“We are adding another inbound lane to help prevent the line backing up into the highway,” said John S. Lewis, chief of maintenance for Arches and Canyonlands national parks.

About 25 workers will be on the job each day.

Besides applying 26 mi. of recycled asphalt, crews will pour about 1,358 sq. yds. of concrete for sidewalks and parking pads, and 54,820 linear ft. of concrete curb during the course of the project.

LeGrand Johnson Construction Co., selected as prime contractor through a bid process, started work at the south end of the park, which includes the park entrance.

The entrance road to Arches National Park is relatively new and was not scheduled to be included as part of the project. However the park is allowed to spend 5 percent of project funding on new construction.

Because of recent problems with park entry traffic backing up onto Highway 191, Arches officials elected to use the 5 percent new construction funding on rebuilding the entrance road.

Both sides of the entrance road will be widened and the additional lane will be added to the left side where visitors enter the park.

Once the lane is constructed, the road will be re-striped, so there are two inbound lanes and one outbound lane.

The additional inbound lane begins just after the Arches National Park sign and continues to the entrance station. Park officials are considering extending the additional lane out to Highway 191, but that would take it outside the park boundary, creating design and approval issues that would need to be resolved.

The maintenance road that starts before the entrance station and runs parallel to the main road will be totally rebuilt to accommodate the number of large trucks that will bypass the entrance station. The work includes replacing the low water crossings with box culverts.

The maintenance shop parking area, the residence road and employee housing pullouts along the maintenance road will all be reconstructed. The work will likely be completed during the same time frame as the entrance road work.

Under the provisions of the environmental assessment for the project, the contractor is allowed to perform mainline roadwork during the night. The contractor was required to identify the type of lighting equipment to be using for night work.

The contract requirement has an emphasis on ensuring down lighting and minimizing light as much as possible while still maintaining worker safety.

Work starts at 7 p.m. each night from Sunday through Thursday. Work crews finish up the work week at 7 a.m. Friday.

At 7 a.m. each workday the park road is expected to be open and ready for use, except for roads that are scheduled for longer term closures during the project.

Because most of the work takes place at night, park visitors are minimally affected by construction noise and equipment movement.

Equipment includes large trackhoes, belly dumps, graders, scrapers, bulldozers, trucks and lighting equipment. The park anticipates that much of the pulverizing, paving and other work will occur at night in order to minimize impacts to visitor daytime travel and access.

“Because we were able to work at night, the daytime and weekend experience for visitors will be comparable to past years,” Lewis said. “However there will be some daytime closures of major areas. These will have an impact, but are limited to 30 days.”

Lewis said that once finished the park roads will be wider, include shoulders and provide more formalized pullouts for scenic viewing.

The Federal Highway Administration has selected a process called “cold in-place recycling” for the project. This process utilizes several large pieces of equipment that crushes up the existing two to three inch lift of asphalt and conveys it to a hopper where it is mixed with a binder and then relayed.

Because the process uses a large “train” of equipment it will not be used on the switch backs. The switchbacks will be reconstructed by pulverizing the existing asphalt in-place, adding water and compacting the material.

Mainline work will start at Devils Garden and proceed towards the entrance station, so that heavy construction equipment is not driving over the new roads.

The road at Devils Garden campground will be fully rebuilt during the initial phases of the mainline work. Once the campground road is rebuilt, the existing 30,000-gal. campground water tank will be demolished and rebuilt under another contract.

Because of the scheduled night closures of the park, the campground will be closed until the end of the full project in November.

New Roadway Will be Slightly Wider

The existing lane width of the main road varies from 9 to 10 ft. Fortunately the existing road prism can accommodate a wider running surface.

The new typical lane width will be 11 ft. with a 1-ft. shoulder. So the new asphalt surface will be 24 ft. wide.

The project also will improve or eliminate many designated and undesignated pullouts along the paved roads. For those pullouts that will be improved, the asphalt curbing will be replaced with colored concrete.

Undesignated pullouts will be removed to prevent further off-road parking. At locations with asphalt curbing not associated with a pullout, the asphalt will generally be replaced in-kind.

Work also will be performed on the Cottonwood Bridge by replacing the existing railing and extending guardrails at both ends. The peripheral tasks, especially those requiring concrete work, will be completed during daytime hours resulting in closure of various pullouts during the day.

To facilitate construction and expedite the completion of the project, certain roads were designated for daytime work. That means shutting down some park locations for a time.

It is expected the Devils Garden area will be closed for 35 calendar days and during that time period, vehicles will be turned around at Sand Dune Arch parking lot.

The Windows section will be closed at the intersection of the main road and access road for 35 calendar days. Fiery Furnace, Salt Valley Overlook, Panorama Point and the La Sal Mountains Viewpoint will be closed for up to 28 days.

The contractor is allowed to schedule when these closures will take place, but the park has to concur. The park will not allow the closure of Devils Garden and Windows to happen at the same time, but the rest of the schedule is open for discussion with the contractor.

Crews must work during the park's busy season because temperatures must be warm in order to lay asphalt.

Visitors are required to exit the park by 7 p.m. Sunday through Thursday to make way for night paving operations. The roads open to visitors at 7 a.m.

Park rangers will remind visitors of the 7 p.m. closure throughout the day at the park entrance station and visitor center, through signage, social media, the park's website, and the park radio channel at 1610 AM.

Some areas of the park may require full road and area closures, such as at Devils Garden, Fiery Furnace and The Windows. Area closures may be up to four weeks long for each area. The park also may close trails in those areas.

The park will reopen roads and trails once area construction work is completed.

Construction equipment will be visible at some locations in the park.—CEG