Work Under Way on Trail Bridge Over Vermont's Winooski River 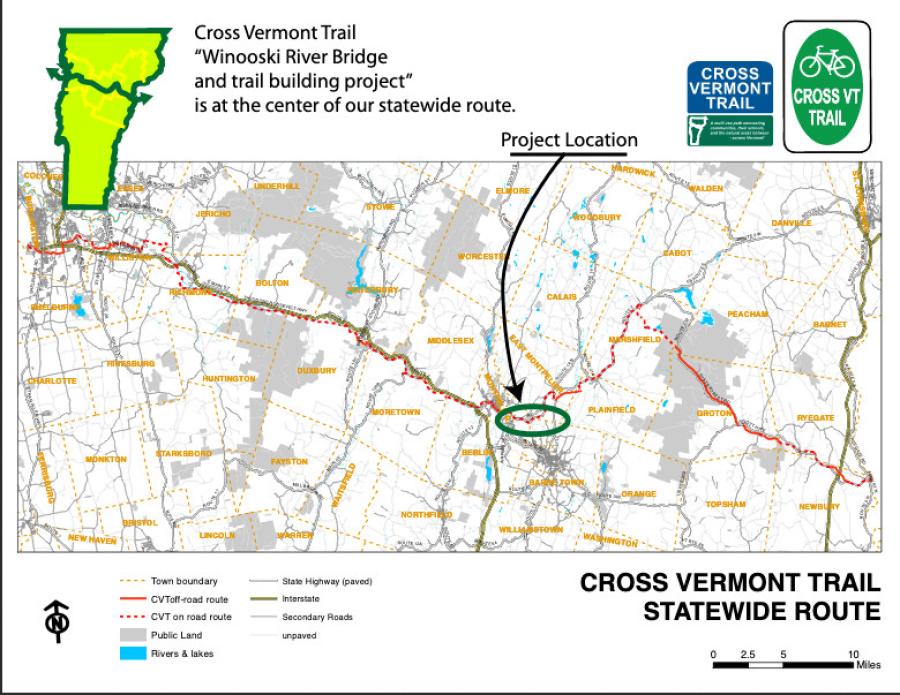 Work got under way Sept. 18 on the construction of a trail bridge over the Winooski River between East Montpelier and Berlin, Vt., as part of the Cross Vermont Trail. Local leaders and trail enthusiasts were on hand for a celebration of the official start of site work.

The 200-ft.-long bridge is a central piece of a larger project to build miles of new trail connecting the Montpelier bike path, according to the Cross Vermont Trail Association (CVTA).

The group said it was awarded a large federal highway grant that will cover 80 percent of the $1.2 million cost of the bridge but needed to raise the remaining 20 percent.

"It's been a big lift, but over the last five years hundreds of local individuals, businesses and municipalities have all pitched in and we are at long last ready to go," the CVTA said on its website.

CCS Constructors LLC, from Morrisville, Vt., is contracted to build the Winooski River trail bridge. The structure may be installed over the river as early as November, with any remaining work around the site being completed spring 2021.

The goal of the span is getting the Cross Vermont Trail off the shoulder of U.S. Highway 2 (known locally as Route 2) and onto a path in the woods. The problem for hikers and bikers using the trail is that Route 2 in East Montpelier is a high speed (depending on traffic), busy road and truck route. The shoulders are wide but are often used by cars and trucks as turning or passing lanes. The statewide Cross Vermont Trail often utilizes scenic roads to connect existing sections of trail.

But, according to the CVTA's website, the road segment near where the bridge is to be built has long been identified as the worst on scenic trail.

The CVTA, a grassroots group of Vermont citizens, has worked hard to make this major infrastructure improvement and create a safer trail system.

"This is made possible by [the Vermont Agency of Transportation] and the Federal Highway Administration [FHA] believing in us and supporting the project development over many years," read a project page on the CVTA website. "They provided several large federal grants that are paying for 80 percent of the cost of the bridge and some related expensive structures."

The CVTA's portion of the remaining percentage of the project money came from local donors and went to pay for engineering, permitting and landowner permissions.

The trail association said, though, the Winooski River trail bridge is just the keystone piece of a larger vision, one that connects the regional trail network (the Montpelier Bike Path, the Central Vermont Regional Path through Berlin, Barre and Barre Town, and the East Montpelier Trail) up to the U-32 Middle and High School and on across East Montpelier to where the Montpelier and Wells River Rail Trail begins at Vermont Rt. 14. From there, the Cross Vermont Trail continues east in various forms on toward the New Hampshire border.

The bridge project will provide immediate access to the Winooski River for fishing, paddling and walking through conserved land along the banks, as well as to new trailheads, parking and other amenities, such as single-track mountain bike loop trails.

The CVTA has long desired building a new, accessible trail, on conserved land in the woods and along the river, away from the road as far as possible. But they recognized that it's a big job, especially since it includes heavily engineered structures, like the Winooski River bridge.

In addition, the trail design also involves the input of numerous landowners, as well as being created in an environmentally sensitive and sustainable fashion. The association hopes the result will be a permanent, conserved greenway corridor that families can enjoy for generations to come.