Workers Build for a Cause at 'Canstruction' Competition 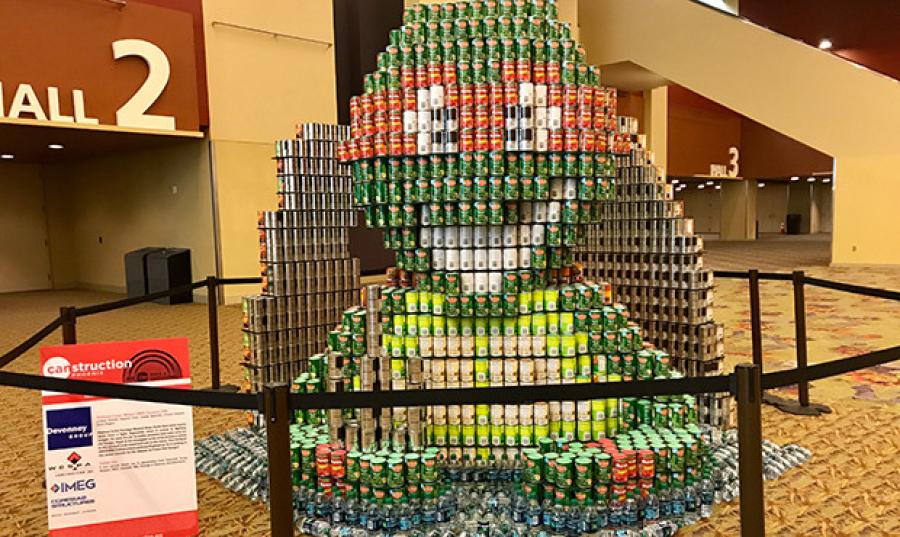 According to Steven Still, co-chair of Phoenix Canstruction, teams start planning their structures at least three months ahead of time, which involves designing, choosing the best cans to use and working with stores to buy the cans.

Teams of construction workers, engineers and architects recently showed off their building skills at the Phoenix “Canstruction” competition in Phoenix, Ariz.

The event combines the fun of a design/build competition with its ultimate goal of helping to feed the hungry. Winners will be chosen based on best label use, most cans and best structure ingenuity, KTAR News reported. To determine the people's winner, the public is invited to “like” their favorite design on the event's Facebook page.

The enormous structures that teams built this year resemble a Teenage Mutant Ninja Turtle, a Star Wars AT-AT walker, a puppy in a food bowl and a seen from Pixar's “Up,” among other designs, KTAR News reported.

According to Steven Still, co-chair of Phoenix Canstruction, teams start planning their structures at least three months ahead of time, which involves designing, choosing the best cans to use and working with stores to buy the cans.

“Most firms will do a test build at their offices just to make sure their structure is going to stand up,” said Still. “Build day is usually a beehive activity… Some firms bring 10 people. Some firms bring 30. Only five can work at a time but the rest can cheer them on.”

The contest has yielded just over 41,000 cans of food that will be donated to the St. Mary's Food Bank when the structures are dismantled, KTAR News reported.

“Summer is a very tough time for St. Mary's Food Bank,” said Still. “Donations are down. People are on vacation. Kids aren't in school. Fundraisers are at a minimum, and it's just too hot to do much. They greatly appreciate the donation of a little over 41,000 cans that we'll be turning over to them.”