The priceless find was found just over a yard underground. 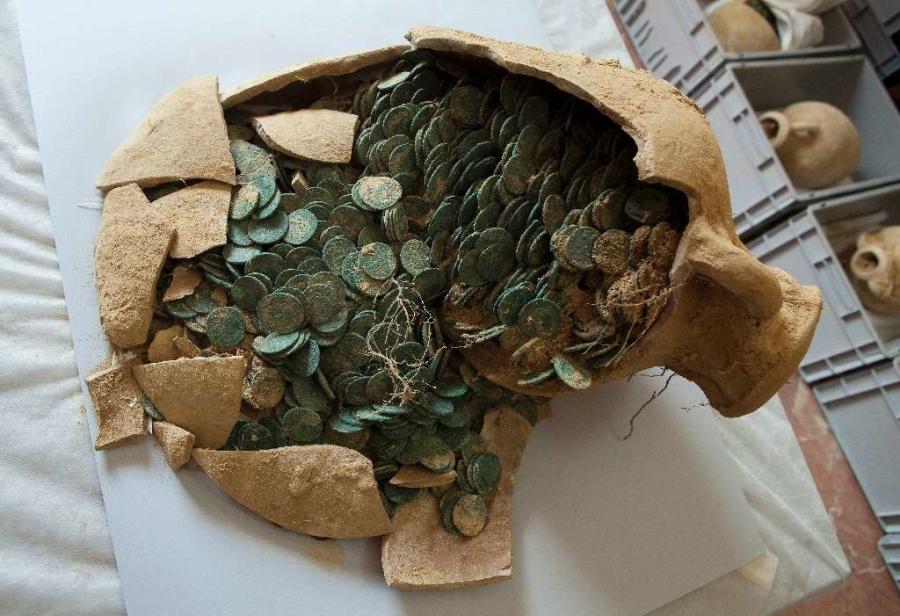 MADRID (AP) Workers laying pipes in a southern Spanish park have unearthed a 600-kilogram (1,300-pound) trove of Roman coins in what culture officials say is a unique historic discovery.

The Seville Archaeological Museum said the construction workers came across 19 amphoras containing thousands of unused bronze and silver-coated coins dating from the end of the fourth century.

The coins are believed to have been recently minted at the time and had probably been stored to pay soldiers or civil servants.

Museum director Ana Navarro said the discovery Wednesday in the southern town of Tomares outside Seville is unique for Spain and of incalculable value.

She told reporters the museum had contacted counterparts in Britain, France and Italy and that the find appeared to be one of the most important from the period.

The regional cultural department said Friday construction work in the park had been halted while archeologists investigate further.

The clay pots, 10 of which were said to be intact, were found just over a meter (yard) underground.

Navarro said the coins studied so far bear images of emperors Constantine and Maximian and with a variety of pictorial images on the reverse.

The cultural department said the museum had no similar coins in its collection. Once the find has been fully investigated the pieces will be put on display in the museum, the department said.

The Romans began to conquer Spain in 218 B.C. and ruled until the fifth century.