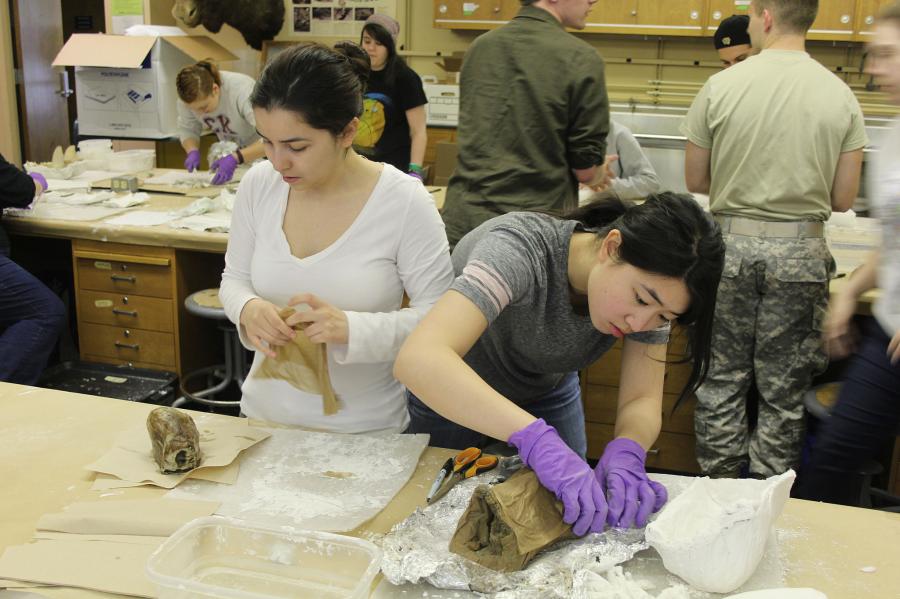 Theresa Hogue photo Andrea Villalpondo (L), works with a mammoth tooth as Vanessa Yu works on another bone. Students in Rebecca Terry’s paleobiology class at Oregon State University had the rare opportunity to work with mammoth bones and other fragments found at a dig near Reser Stadium. The students created foam and plaster jackets to support the bones and prepare them for preservation.

“A construction worker digging in the north end zone of Reser Stadium discovered a large femur bone that appeared to be from a mammoth while moving dirt,” said Michelle Klampe of the news and research communications department. “Further discovery revealed additional bones from several extinct mammals”

The work being done consisted of mass excavation of native material that needed to be removed in order to bring the grade of the new equipment area down to field level. The general contractor is Hunt/Fortis, a joint venture; and the excavation company working in the area at the time was Pacific Excavation Inc. A track-mounted excavator was reportedly being used at the time.

“The crew working in the area immediately stopped work and the company notified Oregon State University officials of the discovery,” Klampe explained. “OSU officials asked Loren Davis, an associate professor of anthropology at OSU, and other experts to examine the bones and the site in which they were found. Davis and others carefully removed the femur and other bones, and pulled large piles of dirt from the site to go through later to locate additional bones.”

The construction crews then moved to other areas of the project while Davis and others excavated dirt and bones from the site for later examination. Once the bones and soil were removed, crews were able to return to working on the project.

“Since the find did not appear to involve humans or human artifacts, the bones are not considered part of an archaeological site,” Klampe said. “There are no special rules or regulations in Oregon governing the preservation or protection of paleontology finds.”

The delay at the time was minimal and construction crews were able to get back to work at the site within a few days.

“There are quite a few bones, and dozens of pieces,” said Davis. "Some of the bones are not in very good shape, but some are actually quite well preserved."

Klampe noted that OSU faculty researchers are working with an outside lab to further pinpoint the age of the fossils using radiocarbon dating. Davis also pulled sediment core samples from the area where the bones were discovered, which, once analyzed, will give researchers a better sense of the environment of the earth at that time.

“Shortly after the bones were discovered, dozens of students, many of them in anthropology classes, had a chance to go through piles of dirt from the construction site to find and remove additional bone pieces,” she said. “In all, 12 bins of bones were salvaged from the project and are now being stored for preservation and research.

“This spring, students in assistant professor Rebecca Terry's Paleobiology class are taking an inventory of the bins to determine, as best they can, how many and what types of bones have been found. Terry's students are also learning how to carefully prepare the bones for drying and long-term preservation. They have constructed plaster and foam jackets to support the bones as they dry and become preserved. Terry, a paleontologist in the College of Science's integrative biology department, reworked the course's curriculum to accommodate the mammoth discovery.

According to Davis, the discovery of ancient mammal bones is not unusual in the Willamette Valley. She noted that the bones, including mammoth, bison, and some kind of camel or horse, were discovered in a 10-foot deep plot in an area that could once have been a bog or marsh.

Work on the renovation project began after the fall football season ended, and is slated for completion by the start of the 2016 home season.

Approximately 37,870 sq. ft. (3,518 m) of space will be added to the facility, and 25,830 sq. ft. (2,400 sq m) of space will be renovated. The locker room alone will be 53 yds. (48.4 m) wide, which is the entire width of the end zone. The renovated building will house nutrition/performance table for all 500 OSU student-athletes, football operations, athletic training/sports medicine and football Hall of Fame. Originally built in 1990, the Valley Football Center was the first football dedicated building in the Pac-12 (then Pac-10) Conference.

OSU is one of only two U.S. universities designated a land-, sea-, space- and sun-grant institution. OSU also is Oregon's only university to hold both the Carnegie Foundation's top designation for research institutions and its prestigious Community Engagement classification. Its more than 26,000 students come from all 50 states and more than 90 nations. OSU programs touch every county within Oregon, and its faculty teach and conduct research on issues of national and global importance.