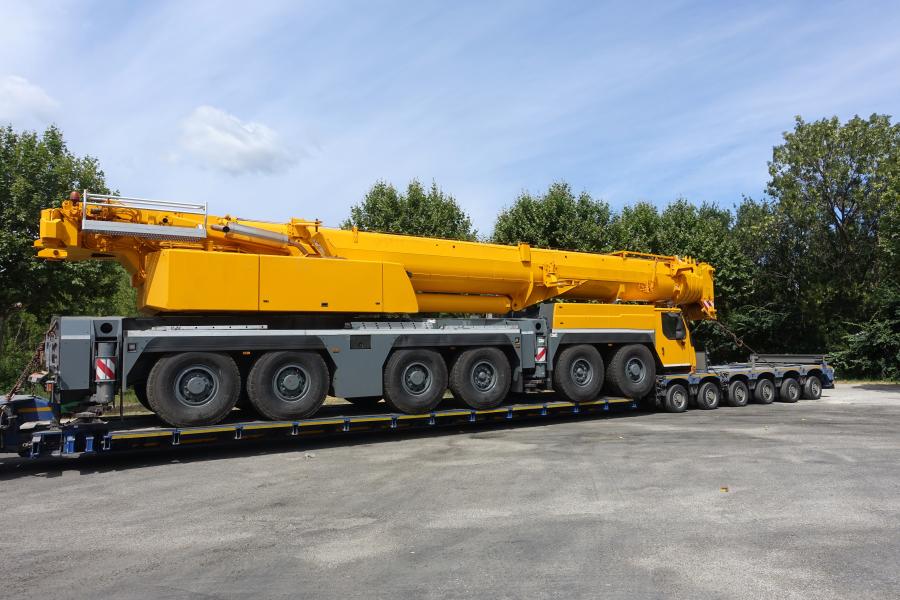 Crane manufacturers incorporate modular designs into newer machine models so that components that can be moved efficiently and in the fewest number of loads possible.

When crane manufacturers promote the features and benefits of a new crane model, "easy transport" is always on the list. With road weight and traffic laws set by local and state transportation departments, crane owners need to know they can get the machine to the job site in the safest, most efficient way possible. Ease of transport is critical to the bottom line.

Obtaining city and state law permits to transport cranes and heavy equipment should be high on the crane owner's list when it comes to delivering a construction crane to a job site. Road laws vary by location, so what one state requires another may not.

Local ordinances dictate where and when a hauling company can carry a crane over local roads. Some government entities require that the move take place during certain hours when traffic is less of an issue.

And if because of its dimensions the crane is designated by the state to be an oversize/overweight load, the services of a pilot car company also will have to be scheduled.

Strict road laws create challenges for equipment managers who have to make sure the truckloads arrive at the job site in the right sequence. The wrong sequence can not only bog down crane assembly on site, but can delay a project start.

The crane owner will have to work with a reputable heavy hauler to determine in how many truckloads the crane will have to be hauled to the job site.

For many years, crane manufacturers have worked to incorporate modular designs into newer models. The goal is to engineer components that can be moved efficiently and in as few truckloads as makes sense for the crane owner.

When Manitowoc Cranes, Manitowoc, Wis., unveiled its new MLC150-1 crawler crane early this year, the company marketed it specifically with features for efficient transport and quick assembly on the construction site.

The 165-ton capacity crawler was designed "to meet the needs of customers that desire a compact, maneuverable crawler crane with a strong load chart and easy transport," noted the company in announcing the new model introduction.

"A big component of The Manitowoc Way is listening to exactly what our customers need and want in their cranes," said Brennan Seeliger, product manager of Manitowoc Cranes.

This new crane features quicker assembly than previous models. The boom butt-mounted sheave enables self-assembly without the boom top, features a button style rope termination and has a gantry-raised counterweight that reduces components. 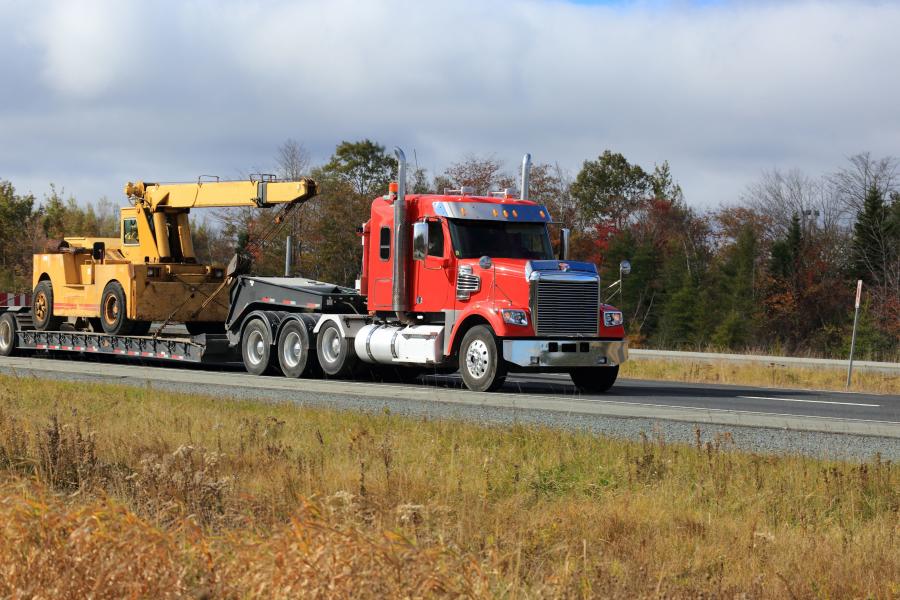 The crane's boom cap, jib butt and struts ship as a single package for fewer connections. It's also easier to transport, touts Manitowoc. "An increased hook height enables self-assembly with various trailer heights, and the crane is designed to be transported with minimal permitted loads."

Link-Belt, Lexington, Ky., introduced the TCC-800, an 80-ton telescopic crawler crane at ConExpo and designed it to move in two loads: The main unit transports under 100,000 lbs. with fly, side frames attached, hook block and ball, lifting sheave and full take of fuel.

The goal of crane manufacturers is to reduce the number of additional trucks and assembly time as much as possible.

Working With Your Hauler

Heavy hauler FR8Star, of Lincoln, Neb., wants crane owners to know the dimensions of their machine and crane components, since transport drivers will take the dimensions provided them to find the right trailer or trailers for the job.

"It's critical to supply them with accurate measurements of your crane and its components when stowed for transport," the hauler blogged.

The hauling company also suggests crane owners consider the crane height on the trailers, noting that anything over 12.5 ft. tall requires a permit for transport.

Finally, FR8Star believes the crane owner should follow the crane manufacturer's instructions on fully stowing or disassembling the machine. "There may be specific practices for reducing the height of specific components, such as by folding the jib a certain way or removing tall exhaust components."

A dependable, trusted heavy hauler will integrate all these critical issues, as well as the crane's weight, hitch locations and placement procedures, into the transport plan.

When Heavy Haul Trucking, Joplin, Mo., transported a massive Manitowoc 999 crawler crane, it was like arranging a jigsaw puzzle. This job required 15 truckloads.

Travis Smith, company president, wrote in a case study on the job that because there are so many trucks involved in moving such a large crane, it's critical to have a plan in place to place the correct pieces on the right trailer type.

"All the time, trying to maximize each trailer for all its room and weight," he added.

When the company transported the crawler crane, one boom section was loaded with two counterweights positioned underneath. The advantage of using a step deck, noted Smith, was the added space for the counterweights.

The load was able to be maximized by weight and dimension. This particular move used flatbeds, step decks, double drops, and multi-axle trailers, notes Smith.

On the haul, cribbing was used as a buffer between the counterweight and the boom. It protected both pieces while giving the boom a secure place to rest on the trailer. "It also keeps the boom level, which is more secure on the trailer," noted Smith.

One particularly long and high crane piece was shipped on a step deck with low profile wheels and wheel cutouts. The choice reduced the trailer deck height low enough to accommodate the height required and still be under 13-ft. 6-in. overall height.

Of course, the largest piece moved was the crawler's carbody. At 87,500 lbs., it was a big piece of machinery, said Smith. A "modest" width of 9 ft. 10 in. still required permits, and an escort was required in New York and Connecticut for being over 80 ft. in length.

An eight-axle removable gooseneck trailer was used to haul this massive crane. "Heavy Haul Trucking looks forward to another large crane hauling job like this one," added Smith.

Boom dollies are specialized trailers that attach under the boom of a crane for travel. To legally transport large cranes, a boom dolly will often be used to evenly distribute the weight across more axles. 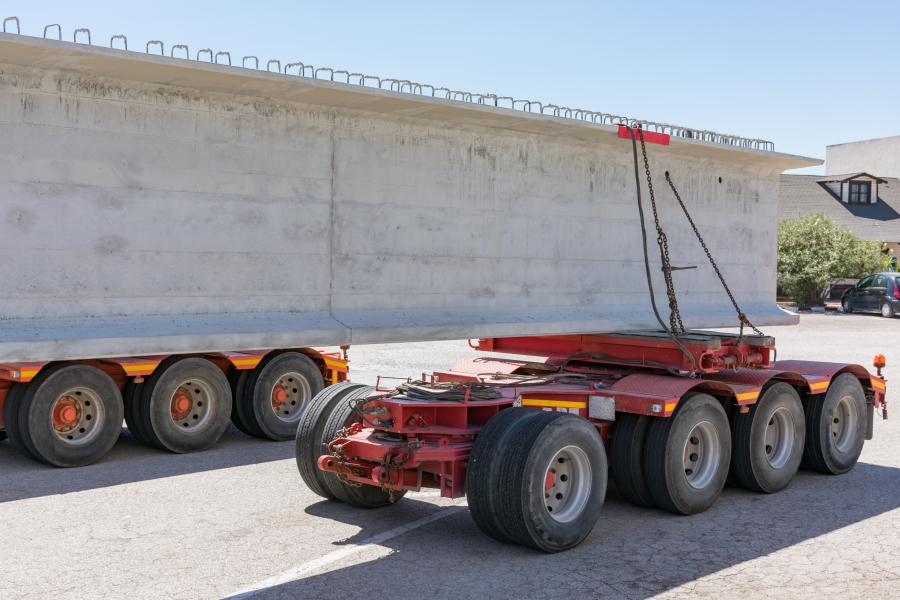 Crane manufacturers typically install a boom dolly "package" to ready the crane boom for a dolly. A boom dolly has anywhere from two to five axles on a straight or articulating frame. The towers on the frame can be split to accommodate counterweight, or may be mounted in the center. The crane manufacturer supplies the lug spacing dimensions so the tower can be designed.

Crane owners use boom dollies primarily for transporting all-terrain and lattice-boom cranes. There are many different options available, though the concept behind them all is to spread the weight of the crane and meet local road laws.

Though smaller cranes require fewer axles regardless of the number of axles, they all have to work in sync. Cranes that require dollies range from 50 to 550 tons capacity,

When you're moving a crane boom from your yard to the job site, a boom dolly will help you move more of the boom, according to Weiss Brothers, Sheboygan, Wisconsin.

With the assistance of a dolly, the crane owner can keep more of the boom intact while moving it across streets and highways.

"If you can move the crane boom with the outrigger boxes, swing-away jib, block, ball and some counterweight, you are going to save the entire operation time during the setup process once everything is at the construction site," blogged the company.

Most dolly manufacturers offer options. Some are designed with single, split or tilting tower options. Three or four axle dollies are also available when the overall weight requires a little more to be touching the ground during transport.

The dolly "can be adjusted, added to, made longer or more rigid depending on the customer's needs for the project or the type of crane they are moving around," according to Weiss Brothers. CQ