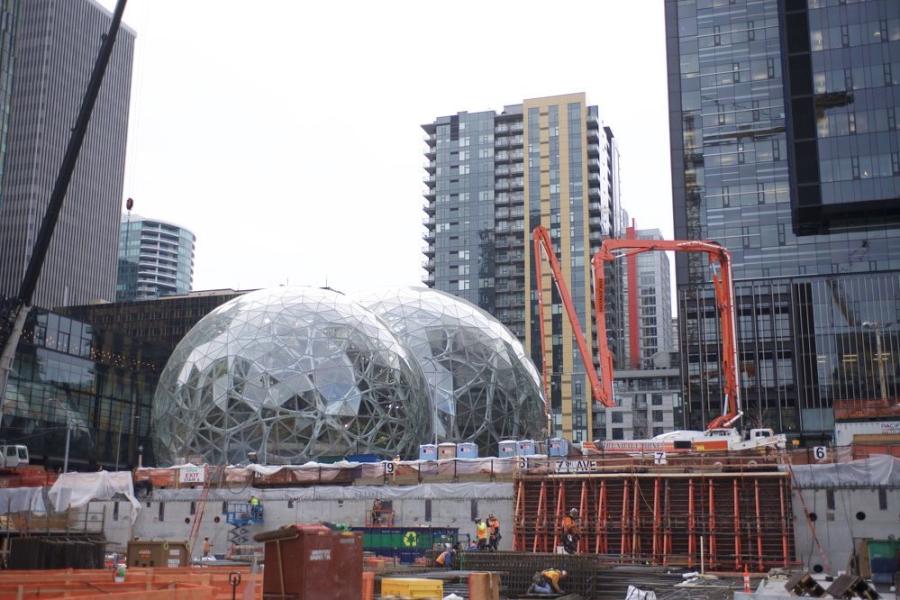 Brundage-Bone poured the mat for Amazon’s Spheres. The Spheres serve as a relaxing getaway for Amazon’s 55,000 Seattle employees.

Amazon has become the first place consumers go to shop for almost anything. In its hometown of Seattle, the corporation has taken over 3.3 million sq. ft. on three city blocks to create an Amazon neighborhood for its 55,000 Seattle employees. Located in the Denny Regrade Triangle in downtown Seattle, the campus consists of three 37-story high-rise office towers, two mid-rise office buildings and a multipurpose meeting center in the shape of three glass domes. The glass domes, called “the Spheres,” opened to the public and Amazonians at the end of January 2018.

“When you ask an operator what they want to operate, it's typically Putzmeister,” said Mark Young, Brundage-Bone national fleet manager. “They have the features that make their lives easier.”

The First of Three

Construction began on the first building, which was named Doppler after Amazon's internal code name for Alexa, in 2013. Designed by Seattle architecture firm NBBJ, the building is 1 million sq. ft. and includes a five-story meeting center, parking garage and 36 additional floors of office space, eateries and employee amenities. 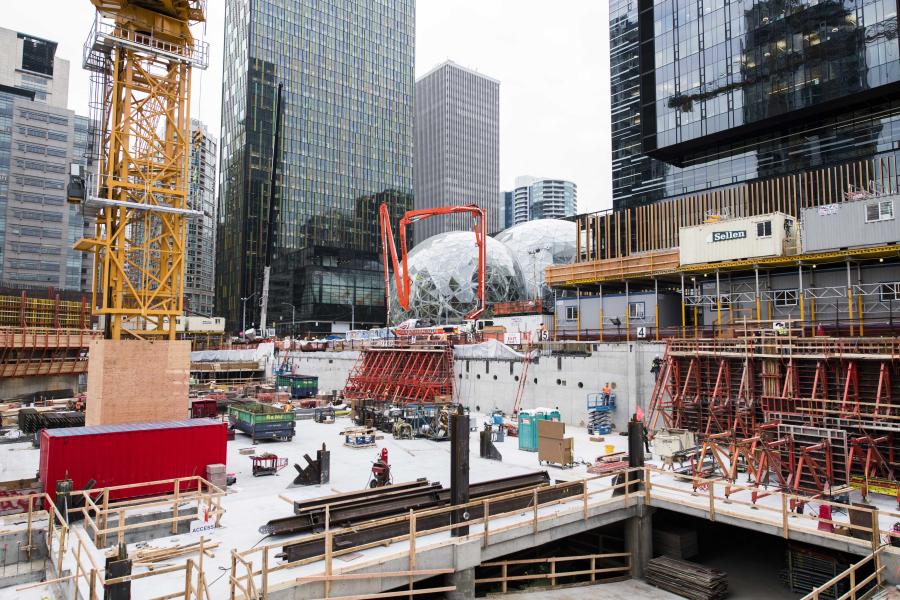 A job site in the middle of a bustling city presents contractors with extra challenges, including space restrictions and street permits required by the city. Depending on the city, these permits can become very expensive and/or restrictive. In the case of Seattle, it was the latter; the job site for Amazon's neighborhood allowed for a tight set up of only 29 ft. wide.

The 11,000-cu. yd. mat pour began with the large boom pumps. As construction on the building continued to reach higher stories, Brundage-Bone added a MX 36/40 placing boom to the site. With a tight set up, the crew used the horizontal reach on the boom pump up to 204 ft. before needing to switch to a placing boom. The tower, used in conjunction with an adapter, was able to free stand 80 ft. Other placing booms were mounted on the core wall with an x-frame on top of a wall climbing system.

“Our equipment was put to the test with this pour,” Jameson said.

Up to the Test

Day One, the second of the three high-rise buildings, includes office space, meeting space, a parking garage, various restaurants and employee amenities. The name of the building comes from the founder of Amazon, Jeff Bezos. He has been known to say every day at Amazon is “Day One” because there is always something new to experiment, innovate or invent.

The construction on Day One also pushed General Contractor Sellen to break a company record. The 1.5 million sq. ft. building required the largest concrete mat pour in its history. 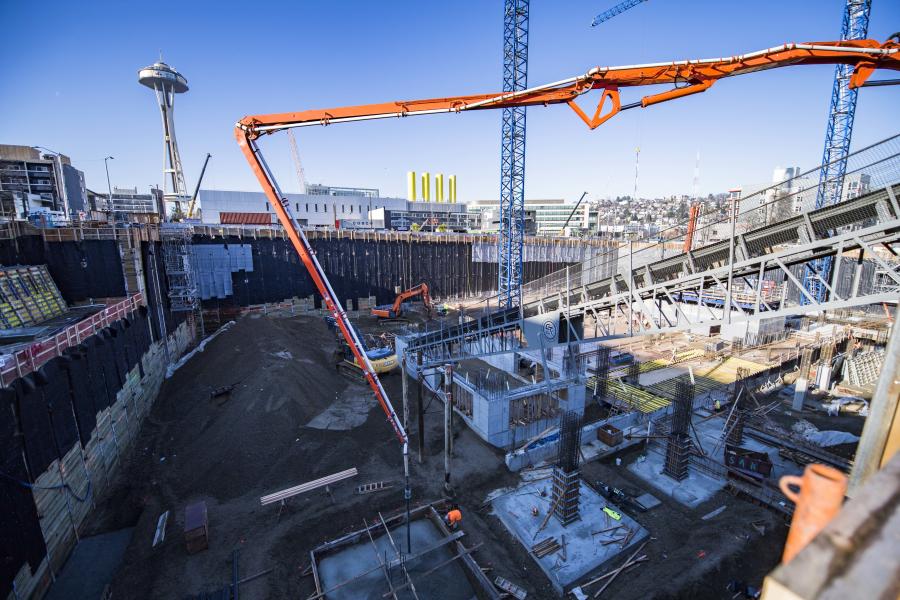 “The pour took 12 hours and we were able to complete the entire pour without a single mechanical error,” Jameson said.

A 61-meter and 63Z-meter boom pumps were used to complete the 11,700-cu. yd. pour. The one-sided support (OSS) outrigger system on these large pumps allowed the operator to reduce the outrigger extension on one side of the unit to create a smaller overall machine footprint.

“The outrigger configuration and ease of placing boom equipment was incredibly important for this particular job,” Jameson said.

The tower opened to Amazon's employees and the public in November 2016, and sits adjacent to the Spheres.

A Relaxing Spot to Get Away

The most recently finished Spheres are a marvel on the city block. They sit in the middle of Amazon's neighborhood as a place for employees to get away and relax. They contain tens of thousands of plants and trees from around the world. Since their unveiling in late-January 2018, they have been delighting visitors.

“Our goal with The Spheres was to create a unique gathering place where employees could collaborate and innovate together,” said Amazon vice president John Schoettler in a statement. “From the moment we started construction, people would stand on the street corners taking photographs.”

The largest sphere is 130 ft. in diameter and is flanked by two smaller spheres on either side. The incredible structures created site challenges of their own — narrow openings and low clearances. A 31Z-meter boom pump was crucial to the pour for its flexibility and maneuverability. It can be strategically positioned for precise concrete placement in unusual job sites, like the Denny Regrade Triangle. The smaller pump was able to reach through the glass window openings to pour a concrete wall that today is home to thriving vegetation.

“As the centerpiece of this truly amazing workplace, we knew our equipment could get the job done accurately and efficiently,” Jameson said.

Poured with white concrete in conjunction with a lot of artistic shotcrete for a very unique look and feel, the Spheres contain 620 tons of steel, 12 million lbs. of concrete and 2,643 panes of glass. The shotcrete was sprayed using a Thom-Katt TK 50 trailer pump. 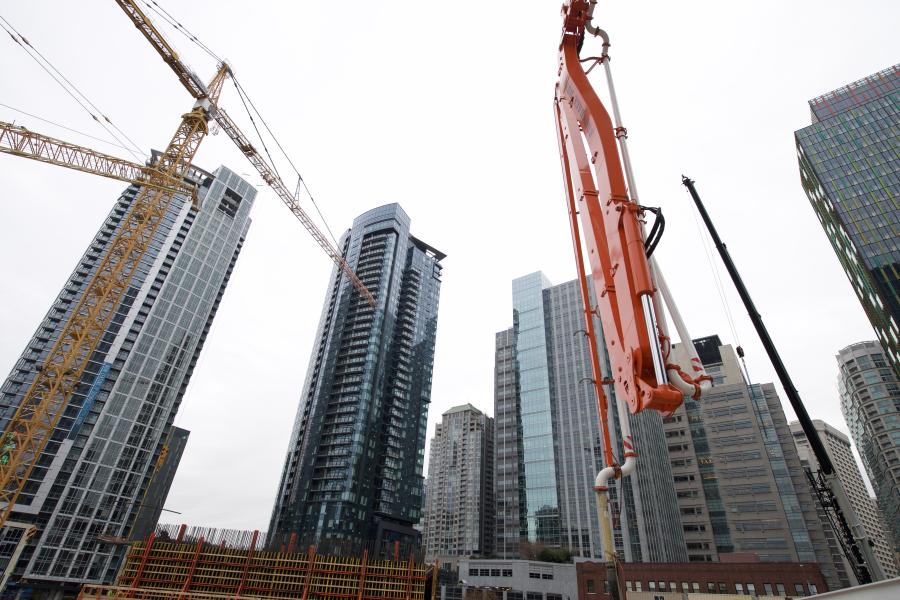 The final building to complete the neighborhood, Block 20, is sized at 1.6 million sq. ft. and is said to reshape the Seattle skyline. The building is scheduled for completion in late 2019. Brundage-Bone poured 10,222 yds. of concrete for the mat footing in July 2017 using a variety of concrete equipment. The office building will be a 45-story building constructed of a steel structure with a concrete core and decks. When the building is finished, Brundage-Bone will have poured nearly 90,000 yds. of concrete.

“I've worked with Putzmeister concrete pumps for 20 years,” said Joshua Armstrong of Brundage-Bone. “They're the best pumps I've ever run.”

When the neighborhood is completed in 2021, a grand total of 270,000 yds. of concrete between three buildings will have been poured. The new Amazon headquarters will change the Seattle skyline and Denny Regrade Triangle neighborhood, and it will give employees of the largest Internet retailer a new place to call home. The project continues to progress day-by-day, and with Brundage-Bone and their fleet, the project continues to go off without a hitch.