The ceremony will include speakers from Tacoma and the Washington State Department of Transportation, as well as congressional and community representatives. 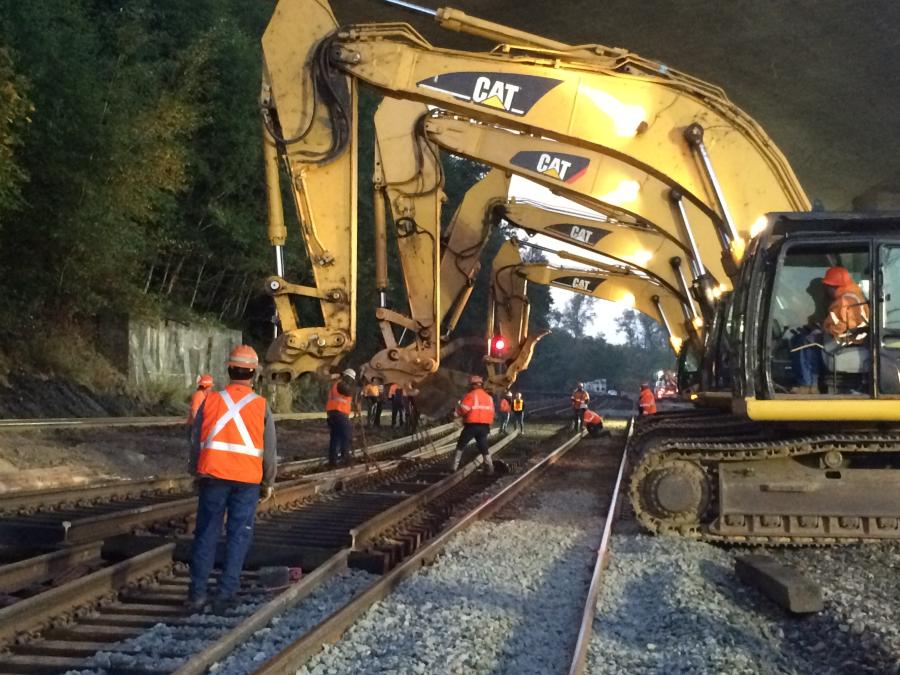 Excavators lower part of a turnout track near Nisqually as part of the new route trains will use in and out of Tacoma.

City, state and railroad officials celebrated the start of construction of the new Amtrak Cascades station in Tacoma's Freighthouse Square with a construction kickoff ceremony on July 13.

The 100,000-sq.-ft. (9,290 sq m) station will be a new structure that replaces an existing portion of the historic Freighthouse Square building. It is adjacent to Sound Transit's Sounder station in the building and across the street from the Pierce Transit Tacoma Dome Station.

The ceremony celebrates the station's construction and a new era in train travel. The station was designed to align with ongoing transit-oriented development within Tacoma's Dome District, aimed at further developing the area as a vibrant transit hub that includes retail and residential spaces. The ceremony will include speakers from Tacoma and the Washington State Department of Transportation, as well as congressional and community representatives.

“This is an important milestone for Washington's high-speed rail program and the city of Tacoma,” said Ron Pate, director of WSDOT's Rail, Freight and Ports Division. “This station helps improve passenger train travel throughout the Amtrak Cascades corridor and we're pleased to celebrate with community and state officials.”

The station was designed in consultation with an active citizen advisory committee and city officials. It features large glass windows for a bright, welcoming lobby, wooden columns, terrazzo flooring and sliding and vertical lift doors to create an indoor/outdoor public space. When it opens in fall 2017, the station will serve six daily roundtrip Amtrak Cascades trains and Amtrak's Coast Starlight long-distance service.

Businesses within Freighthouse Square will remain open during construction.

The new station is part of the $149.9 million Point Defiance Bypass high-speed rail project, which will reroute passenger train traffic through DuPont, Lakewood and Tacoma, creating a faster and more reliable travel route. Point Defiance Bypass is one of 20 projects in the federally funded Cascades High-Speed Rail Program. When complete in 2017, the projects will add two more daily roundtrips between Seattle and Portland, for a total of six; reduce travel time between the two cities and improve on-time reliability.