$1.4B TxDOT Project Aims to Ease Traffic on I-35 Near Dallas

A major reconstruction project will make a difference for travelers through Denton and Dallas counties in Texas when it is finished. 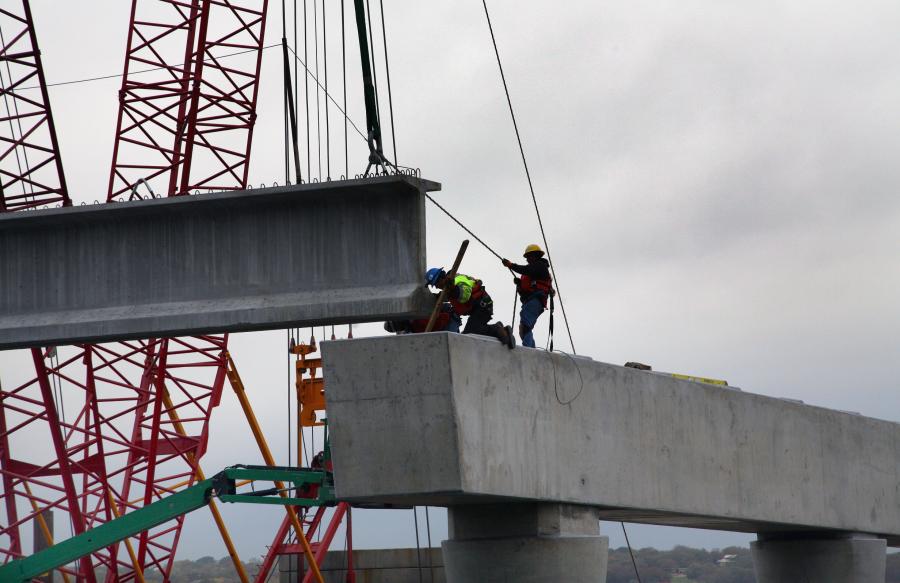 A major reconstruction project will make a difference for travelers through Denton and Dallas counties in Texas when it is finished.

The approximately 30-mi. (48.28 km) project travels through two counties and nine cities, and Phase I will cost $1.4 billion. Construction on this phase started in October 2013, and is currently on schedule to be substantially complete by mid-2017. Funding comes from federal, state and local sources. The construction is being led by AGL Constructors, a joint venture including Archer Western, Granite Construction Incorporated and Lane Construction Company.

The 35Express Project reconstructs I-35E between U.S. Highway 380 in Denton County and I-635 in Dallas County. The contract calls for the reconstruction or rehabilitation of more than 75 bridges, adds an 18-mi. (29 km) reversible managed lane system, an additional lane of traffic in each direction between the Sam Rayburn Tollway and U.S. Highway 380, continuous frontage road, and a new southbound bridge across Lewisville Lake.

According to the project Web site, Interstate 35E (I-35E) serves the rapidly growing areas of southern and central Denton County, as well as the major Dallas suburbs immediately north of I-635.This corridor is a major artery for hundreds of thousands of commuters, as well as a primary link to major universities in the city of Denton, including the fourth-largest university in the state, the University of North Texas (UNT).

In addition, I-35E is an important truck corridor and accommodates more than 12,000 trucks daily. The interstate also handles almost 200,000 total vehicles daily near I-635, and 128,000 vehicles a day across Lewisville Lake. In addition, because of a lack of continuous frontage roads across Lewisville Lake, there are no viable north-south commuting alternatives to I-35E at this crossing.

This section of the I-35 corridor is on the list of Texas' 100 most congested roadways. Expanding I-35E will reduce congestion that results in lost work time, increased fuel costs and higher price of goods. The project will improve mobility across Lewisville Lake with construction of a second bridge that will offer more reliability for commuters during major incidents.

The $4.8 billion project will be constructed in phases, and will rebuild the entire 30-mi. corridor. Approximately $1.4 billion in funding has been identified for Phase 1 of this project, which includes SH 121 regional toll revenue (RTR) funds dedicated to Denton County. Phase 2 of the project will occur when the additional funding becomes available.

“The length and amount of coordination needed for this project makes it unique,” said Kimberly Sims, public information manager. “AGL coordinated with various entities on ROW acquisition, utilities, design, traffic control, and aesthetics. In addition, we are demolishing four bridges and converting them into at-grade roadways with increased capacity. Belt Line Road is one of the more complicated pieces of the project — AGL is essentially building two bridges at once. The mainlane bridge is being raised 25 feet above its current elevation and Belt Line Road is being raised to the elevation of the existing mainlane bridge. Improving mobility is one of the reasons for elevating this interchange. The newly elevated interchange will allow motorists to travel over the railroad track near the intersection.”

I-35E was originally constructed in the 1950s and 60s. In 1998, TxDOT began a comprehensive review and planning study of the I-35E corridor in Dallas and Denton counties. For the next 13 years, TxDOT and communities and stakeholders refined the designs and upgrades for this corridor. In 2011 and 2012, TxDOT received environmental clearance for the $4.8 billion infrastructure project. Also, $1 billion in funding was identified for an initial phase of the project with most coming from SH 121 regional toll revenue funds dedicated to Denton County. In accordance with state law, TxDOT and corridor stakeholders held seven public meetings to determine the method and scope of the initial phase (Phase 1) as well as lay the ground work for Phase 2 to complete the remaining elements of the corridor.