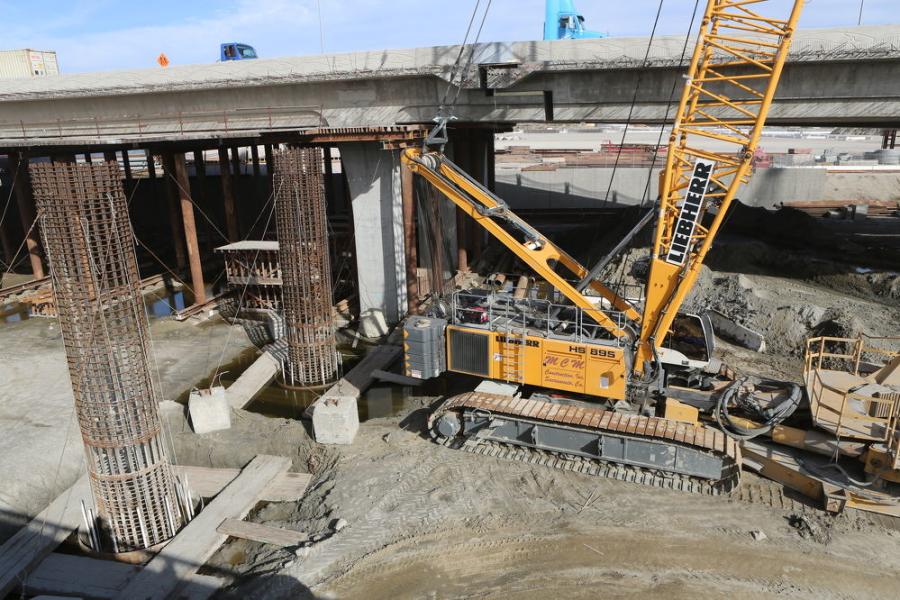 Crews have demolished much of the original bridge, a lift-span structure built in 1948. (California Department of Transportation photo)

Caltrans District 7 in Los Angeles is working on a $247 million project to replace a historic, but aging Commodore Schuyler Heim bridge that was not designed for today's taller ships to pass beneath. Work began in 2011 and completion is expected in late 2020.

Crews have demolished much of the original bridge, a lift-span structure built in 1948. The new bridge, now under construction, is in the same location as the old — on State Route 47 between Ocean Boulevard and a quarter mile south of State Route 102. 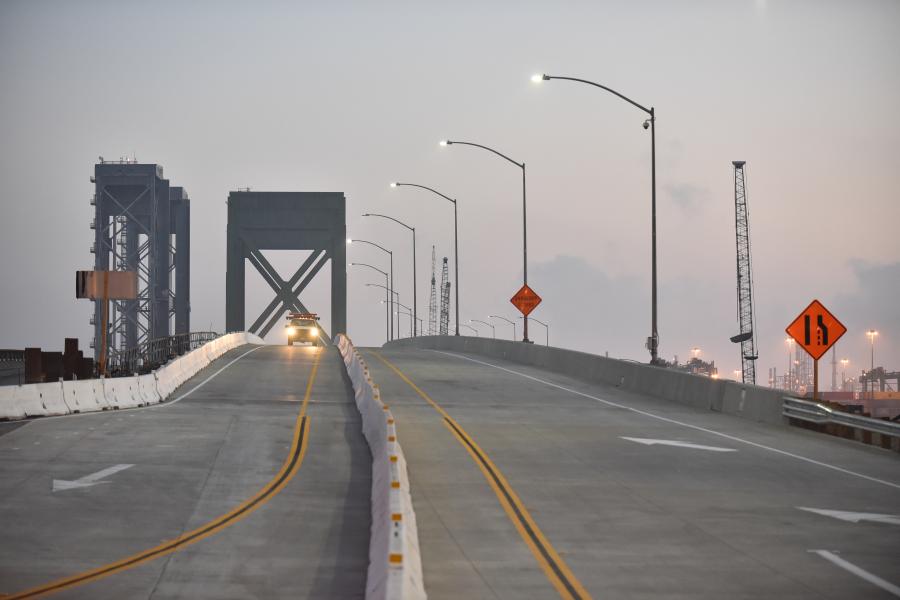 As discussions developed about improving or replacing the bridge, it was determined that the original bridge was eligible for listing in the National Register of Historic Places.

Built by the U.S. Navy, the eye-catching north-south lift-span bridge provided a link between Terminal Island and the mainland where Wilmington and Long Beach meet. Several times a day, traffic was halted to allow the bridge's metal-plate roadbed to rise elevator-style to allow ships including tugboats, sailboats and large vessels to pass beneath.

The well-recognized, green-painted crossing featured two cross-braced steel towers suspended by cables. Planners determined that it would be more cost effective to replace the bridge than attempt to retrofit it for earthquake safety.

So, the lift-span portion of the existing Commodore Schuyler Heim bridge is being replaced by a fixed-span bridge structure. It means the new bridge that spans the length of the channel will be permanently attached to support beams. The new bridge is tall enough to allow for tall ships to pass beneath without use of mechanical lifts.

“The Schuyler Heim Bridge Replacement Project replaces the original six-lane vertical-lift span bridge with a seven-lane bridge, including one additional southbound auxiliary lane and standard emergency shoulders,” said Michael Comeaux, public information officer of Caltrans District 7. “The old Heim Bridge had three non-standard 11-foot-wide lanes in each direction with no shoulders. The new bridge will have three standard 12-foot lanes with 10-foot shoulders in each direction and one southbound auxiliary lane.” 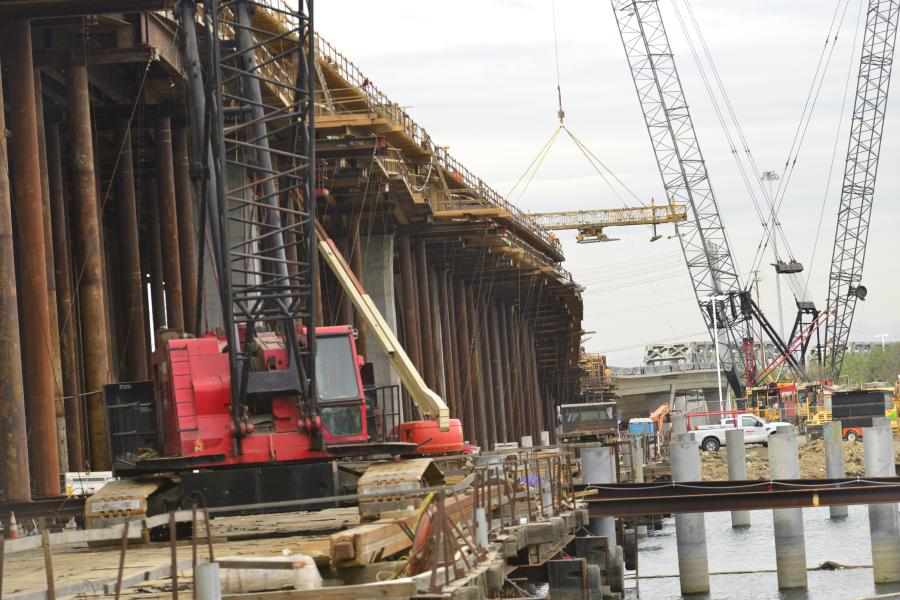 The Heim bridge is one of three bridges accessing Terminal Island and carrying high truck traffic to and from the Port of Los Angeles and Port of Long Beach. The new fixed-bridge configuration is expected to improve traffic flow for trucks and passenger vehicles.

Also, replacing a deteriorating structure with a new one will reduce maintenance costs and lead to improved roadway connections in the future. The bridge is being constructed in stages:

About 70 workers are at the job site during peak periods.

As part of stage 3 crews will construct the southbound portion of the new bridge. Stage 4, 5 and 6 will be finishing work.

The new bridge will provide a permanent navigable channel that is 180 ft. wide with a vertical clearance of 47 ft. The height is adequate for passage of ships underneath.

With the elimination of the lift, traffic will no longer be delayed because of passing ships. Replacing the lift span bridge with a fixed-span bridge is expected to improve safety and benefit the local, state and national economy and international trade. 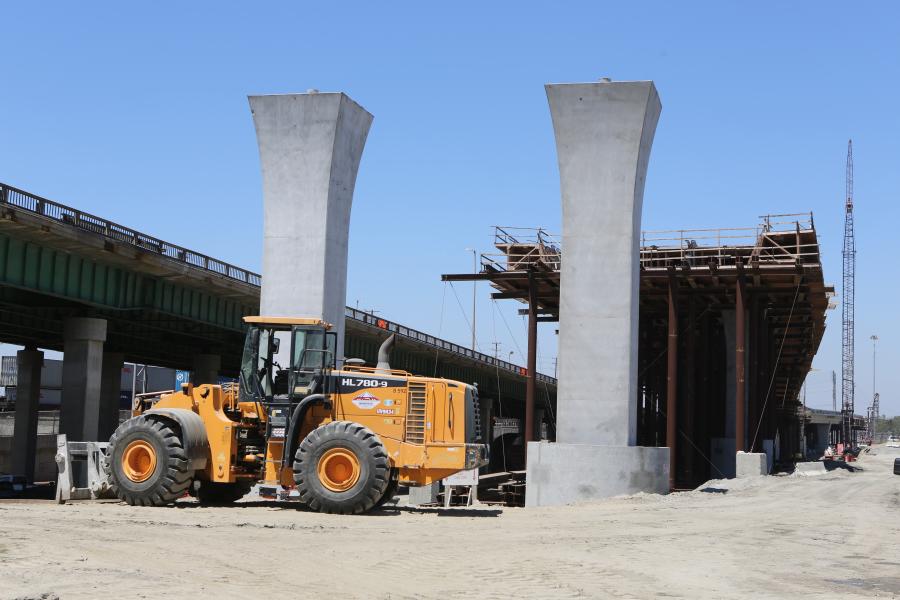 In 2011 the amount was set at $181.3 million. Planners envisioned the overall project including contingency and state-furnished materials to come to about $210 million.

The project construction cost has increased primarily because of the complexity of constructing large and deep foundations in the marine environment. As a major undertaking including underwater work, the project also required added time for study and expert analysis. 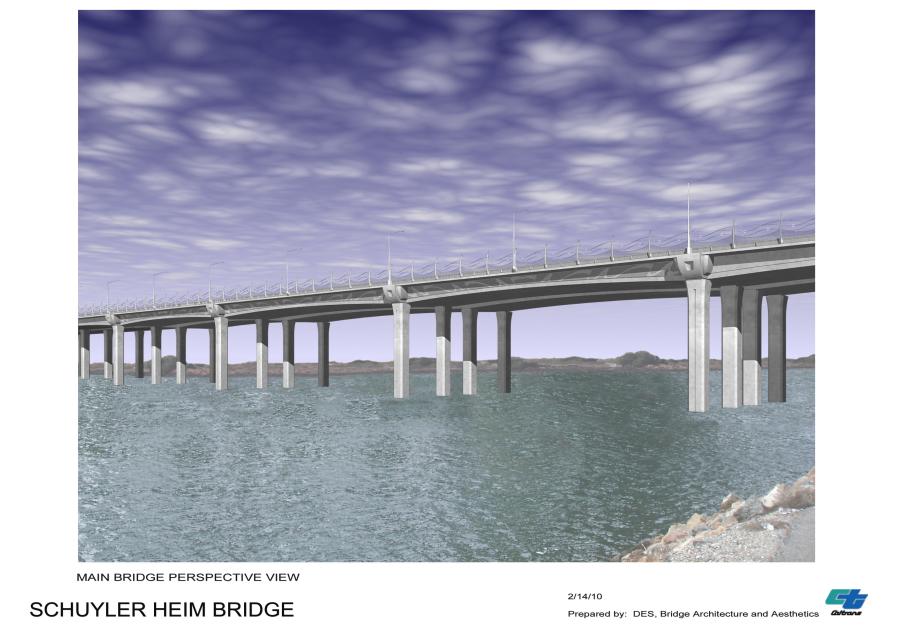 The old Heim bridge was built mostly of steel. The new bridge will be mostly concrete spanning 4,120 ft. in length. It is a fixed-height structure made from pre-stressed concrete box girders.

When completed, the bridge will conform to seismic and roadway standards. It is expected to reduce future maintenance costs.

Materials from the original bridge are being recycled including steel, concrete piers and roadway decks.