$250M Texas Live! Due to Break Ground in November

The project represents "an opportunity for entertainment and baseball to come together like never before." 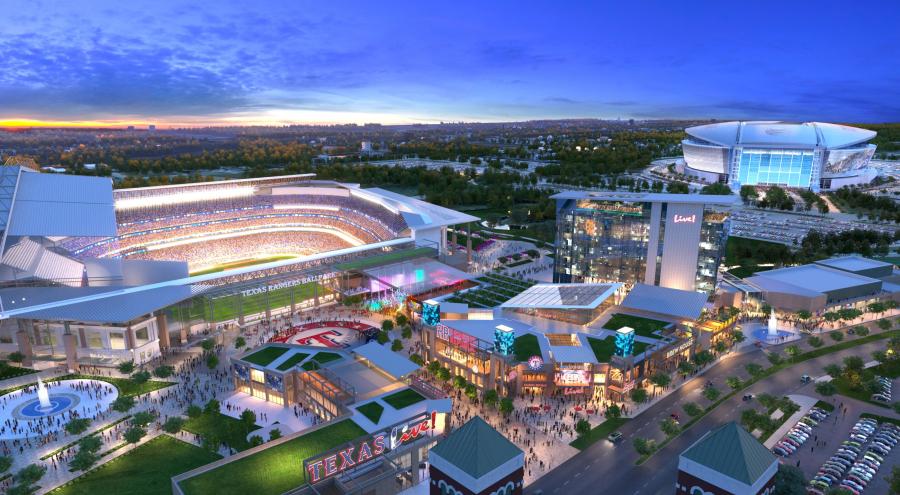 Texas Live! photo. The Texas Rangers and its development partner, The Cordish Companies, released new artist renderings and an expanded vision for the Texas Live! project that will break ground this November.

The Texas Rangers and its development partner, The Cordish Companies, released new artist renderings and an expanded vision for the Texas Live! project that will break ground this November.

The first phase of the mixed-use project, which will be located between Globe Life Park and AT&T Stadium, is now expected to cost $250 million and will feature three major venues as well as an upscale, full-service 300-room hotel and convention space. Texas Live!, set to open in 2018, is projected to create more than 3,000 jobs and draw more than three million visitors to Arlington annually, officials said.

Details about the project were unveiled during a press conference at Globe Life Park in Arlington that included Arlington Mayor Jeff Williams, MLB Commissioner Rob Manfred and representatives from the team and development company.

Williams called Texas Live! transformative not only for Arlington's Entertainment District but for North Texas as well, drawing even more tourists to the region.

With 200,000 sq. ft. (18,581 sq m) of entertainment, shopping and dining options, the three venues — known as Rangers Republic, Live! Arena and Arlington Backyard — are designed to be a year-round destination for Arlington residents and visitors alike, officials said.

“I really do believe Texas Live! will be a great destination for fans to enjoy our game and to be entertained before and after the game,” Manfred said.

Texas Live!, originally billed as a $200 million, 100,000-sq.-ft. (9,290 sq m) project, was first unveiled last December. The 300-room hotel and 35,000-sq.-ft. (3,252 sq m) Convention Center annex were initially set to be built in a later phase but the Rangers and The Cordish Companies said they identified many beneficial reasons to push that part of the development forward sooner than later.

Construction on Texas Live! is expected to start at the end of the Texas Rangers season. The entertainment and shopping venues are set to open prior to the start of the Rangers' 2018 Opening Day with the hotel opening later that year.

“The hotel along with the convention center annex offers the city the potential to greatly increase its convention and tourism business,” said Blake Cordish, vice president of The Cordish Companies. “It creates a more dynamic destination in Texas Live! Not only can fans come early and stay late, but they can stay over. We certainly hope to capture visiting teams when they come to town. We hope to be a great complement for attractions such as Six Flags and sports fans and entertainment fans.”

As part of a public-private partnership approved with the Texas Rangers last December, the city of Arlington plans to contribute $50 million in natural gas revenue toward the Texas Live! project. If project milestones are met, the city also is prepared to provide performance-based incentives that include allowing the team to retain income from the following sources: hotel occupancy tax, property tax, sales tax and mixed beverage tax for 30 years from the city and hotel occupancy tax and sales tax from the state for 10 years.

• Interactive games for the entire family

Live! Arena, the heartbeat of Texas Live!, is a multi-level, central gathering place comprised of more than 35,000 sq. ft. of best-in-class dining and entertainment options. Designed by internationally-acclaimed Jeffrey Beers International, Live! Arena will be the “living room” of Texas Live!, providing fans with one of the best sports viewing experiences imaginable and will be the ultimate place to celebrate the Rangers and all Texas sports. Live! Arena will feature:

• A state-of-the-art, interactive AV presentation that includes a 100 ft. (30.5 m) LED screen as the centerpiece

• A performance stage for concerts

• An LED ribbon board that surrounds the venue

Arlington Backyard, a 5,000-capacity outdoor event pavilion will become the “backyard” of Texas Live! An embodiment of the Rangers spirit, Arlington Backyard will be covered by a permanent roof and will be a fun, casual place to gather for all different types of events throughout the year. Arlington Backyard will host more than 250 annual events including cultural activities, art shows, regional and national concerts, charitable functions and community events.