“The project is a complete modernization and expansion of the port,” said Alison Kohler, regional public affairs officer for region 2 of the U.S. General Services Administration. 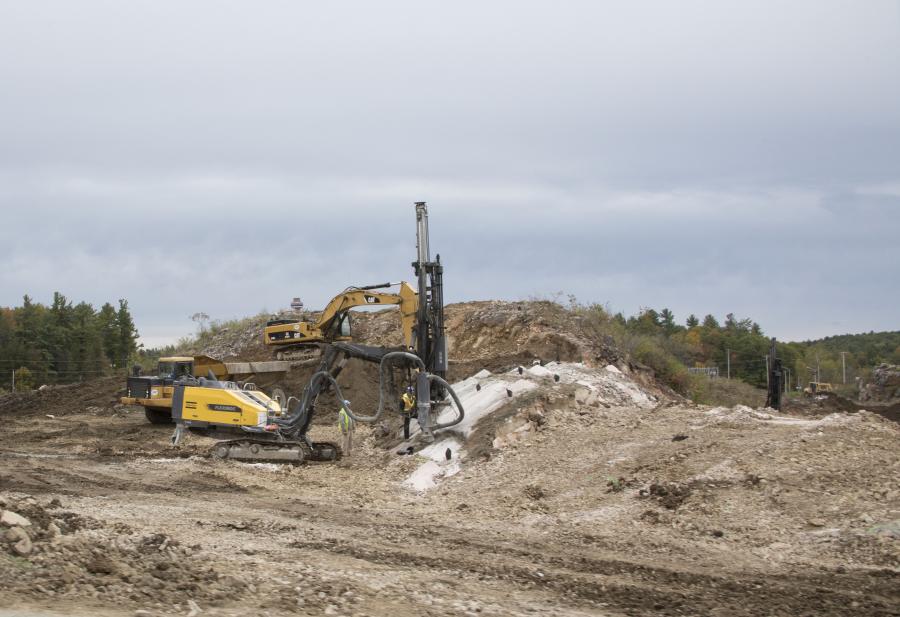 As more and more people use the facility to enter the United States, upgrading and expanding the port of entry becomes a necessity.

A $215 million U.S. Land Port of Entry project under way in Alexandria Bay, N.Y., involves replacement of the port of entry with a larger and more efficient facility at the much-used U.S.-Canada border crossing.

“The project is a complete modernization and expansion of the port,” said Alison Kohler, regional public affairs officer for region 2 of the U.S. General Services Administration.

“All existing buildings will be demolished and replaced by new facilities.”

The U.S. General Services Administration awarded a contract to Northland-Cianbro, a joint venture based in Pittsfield, Maine, for the facility-wide modernization and expansion of the U.S. land port of entry at Alexandria Bay.

Construction began in August 2017. The project is expected to be fully completed in July 2022.

As more and more people use the facility to enter the United States, upgrading and expanding the port of entry becomes a necessity.

Currently, 35 to 40 workers are on the job daily. Most of the work is under way south of the existing facility, preparing the new port of entry site for construction.

Construction of the new commercial inspection building foundation will follow.

At peak construction, the number of daily workers is projected to increase to 150, representing a variety of trades.

Most of the construction will require heavy use of concrete. About 7,900 cu. yds. of cast-in-place concrete will used in Phase I and 17,100 cu. yds. in Phase II.

Metal also will be in high usage, Kohler said.

The project will address traffic issues by expanding the queuing area; increasing the number of primary inspection lanes; enlarging the area for secondary inspection; providing safe and secure vehicle parking; and building a safe well-defined truck queuing and maneuvering area.

The new facility includes 14 new primary lanes, all equipped to process passenger traffic. Eight of the lanes will also be equipped for both commercial and passenger vehicles.

“This is an increase of five passenger lanes and five commercial lanes as compared to that of the existing facility,” said Timothy Walker, U.S. Customs and Border Protection Area port director. “With the increase in inspection lanes, new technology and a better infrastructure, it will reduce delay and improve traffic flow.”

Phase I is under way and is expected to be completed in January 2020.

The existing commercial warehouse consists of a 3,000-sq.-ft. loading dock area and a double-wide trailer. The new commercial building and warehouse will span about 60,000 sq. ft.

Livestock being brought across the border include cattle, ducks, pigs and horses. Other agricultural products crossing at Alexandria Bay include potatoes, lettuce, yeast and corn.

The existing port of entry was not adequate for present and future needs. It is simply too small for a modern-day border crossing.

Most people crossing in passenger vehicles are tourists traveling from the Ottawa, Kingston, Toronto and Montreal regions who are destined to many locations throughout the United States. The port also processes travelers who cross the border for business activities in the surrounding area.

Walker added that the Alexandria Bay port of entry is more than 40 years old.

“Given CBP's primary mission to protect our borders and communities, providing our officers with a modern facility is critical to ensure they are best able to complete that mission.”

The existing Alexandria Bay Land Port of Entry did not meet the current and future operational needs of the inspection agencies at the port. The lack of an adequate commercial cargo inspection facility was hampering the safe and secure execution of U.S. Customs and Border Protection and other tenant agencies' missions.

The short distance between the international border and the primary commercial inspection area was inadequate for vehicle queuing. Given the capacity of the U.S.-bound bridges and roadways, the Thousand Island Bridge Authority currently limits the number of vehicles in Canada that can proceed through to the crossing. The result is significant queuing of commercial vehicles on the Canadian roadways entering the crossing and sometimes back to Highway 401.

The bridges are not designed to handle prolonged periods of dead load associated with stationary commercial traffic. In addition, the removal of significant amounts of rock is necessary to allow for increased program and vehicle circulation.

Also, the existing main building did not accommodate the current and future needs of the tenants. The existing commercial building barely has enough space to unload a single truck and the office component is housed in mobile trailers.

The projected increases in traffic volume and implementation of new security procedures necessitate an increase in the port of entry workforce beyond the capacity of the existing facility.

The U.S. Land Port of Entry at Alexandria Bay is a vital link between the Ottawa Canada area, New York and major U.S. distribution centers.

The Alexandria Bay Land Port of Entry, also known as the Thousand Island Border Station, is located on Wellesley Island in the western straits of the St. Lawrence River. The port of entry is served by I-81, a major highway heavily traveled by both commercial and non-commercial travel.

From Canada, the highway provides direct access to major cities in the United States, including distribution centers in the Midwest and mid-Atlantic areas. The existing land port of entry consists of four primary buildings constructed in 1969.

The mission of the Port of Entry is to inspect and process vehicles and individuals entering the United States from Canada. The mission is primarily carried out by the U.S. Customs and Border Protection, the Department of Agriculture's Animal and Plant Health Inspection Service, Veterinary Services and The Food and Drug Administration.

​The General Services Administration owns and maintains the facility, and CBP operates it. To reduce drug traffic, the Alexandria Bay crossing makes use of drug-sniffing dogs.

“The Buffalo Field Office, which covers all of New York except New York City, employs canine teams throughout all of its ports of entry,” Walker said.

Construction will have minimal impact to port operations. The new port is being built south of the existing facility.

Phase I includes demolition of the existing commercial structure and adjusting site features requiring the blasting and removal of rock. Temporary facilities will be added to accommodate port operations.