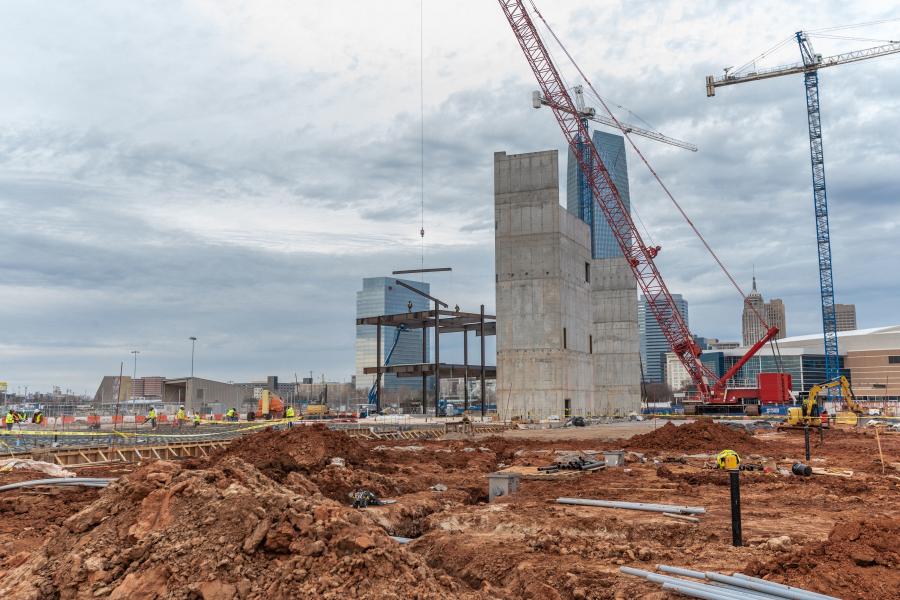 The new convention center, expected to be finished in 2020, will draw events that bring attendees from around the region and world. It will provide a boost to Oklahoma City's economy and serve as an ideal host for local events. 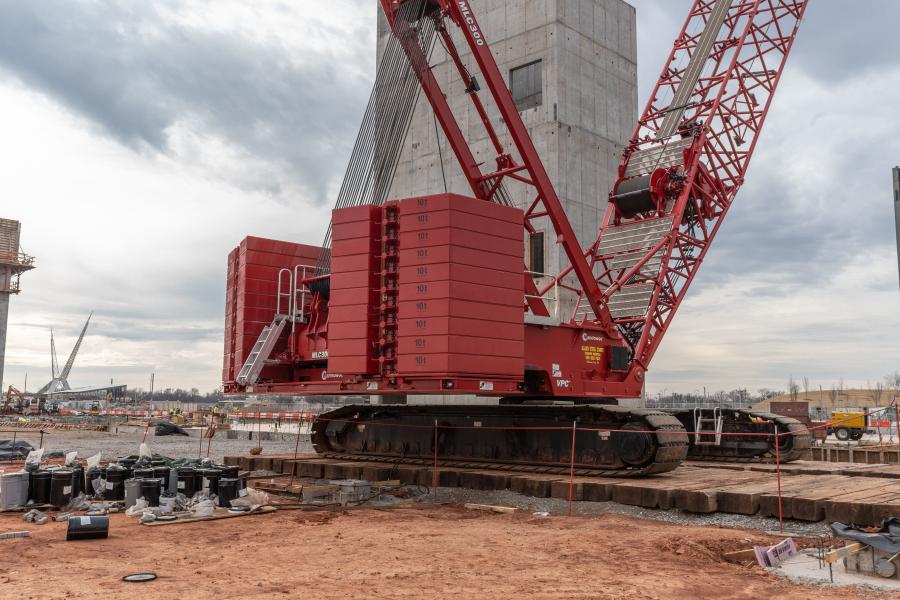 The new center will replace the aging Cox Center and provide Oklahoma City with the means to compete nationally with a product and facility that will raise the bar for convention centers integrated into urban surroundings. It will consist of approximately 500,000 sq. ft. of gross building area, which includes 275,000 sq. ft. of leasable space divided up into an exhibit hall, meeting space and ballroom.

The state-of-the art building will be located east of Scissortail Park along Robinson Boulevard between SW 4th and SW 7th streets. Like the park and many other important landmarks downtown, it will be served by the OKC Streetcar.

The convention center's sleek and modern design features sweeping downtown views, and materials designed for energy efficiency and resiliency against the weather. 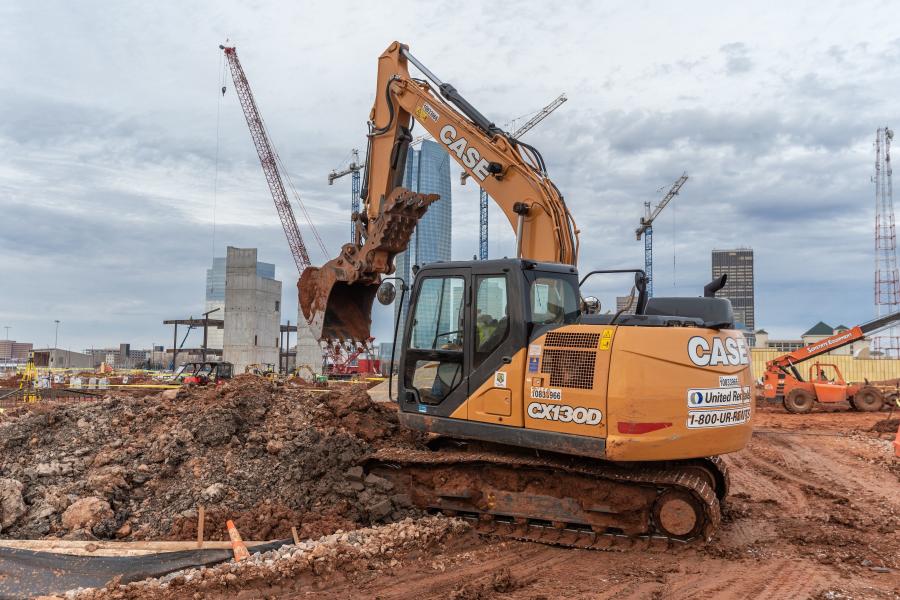 The exhibit hall will dominate the ground floor, featuring three operable walls to divide it in up to four flexible spaces. The ballroom is the main space on the fourth level, complemented by 10,000 sq. ft. of pre-function space and a 4,000-sq.-ft. balcony.

Informal meeting spaces, a kitchen, a potential café space, an expansive loading dock and administrative offices also are planned for the convention center.

The gleaming, angular façade has towering glass walls to make maximum use of natural light and takes its design cues from Oklahoma City's sky, landscape and architectural character.

Landscaping outside the convention center will use native plants and trees well-suited to the local climate, with a focus on sustainability, comfort and beauty. A central plaza and other inviting spaces will help the convention center's exterior come alive with activity.

Flintco LLC of Tulsa, Okla., is primary contractor for the project. Flintco specialties include aviation, corrections, education, industrial, leisure, multi-unit housing, museums, offices and performance projects. The builder has been in business for more than a century and was contractor for the Tulsa Convention Center Expansion and Renovation project. 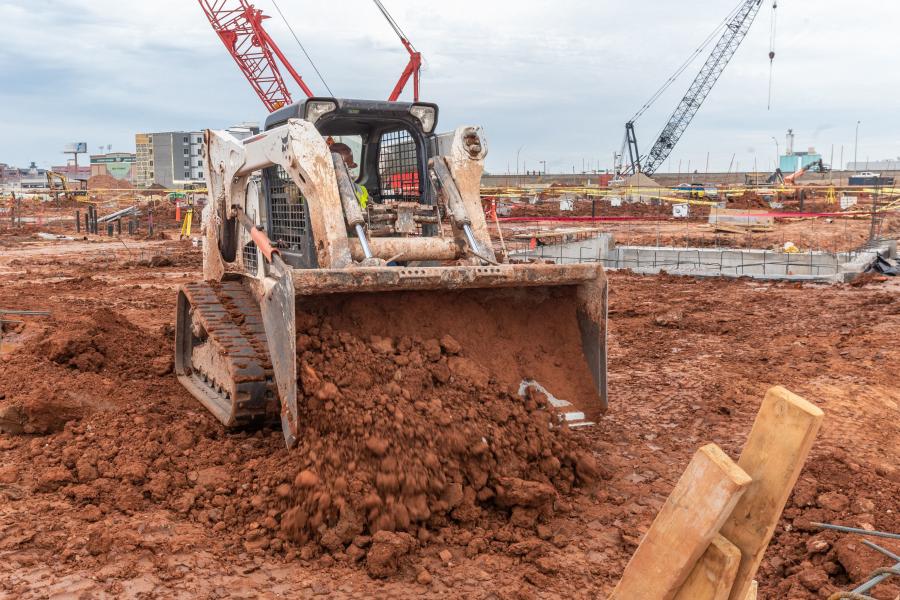 Currently, about 90 workers are on duty at the project site. The number is expected to peak at between 400 and 500 workers as construction of the building advances.

Heavy equipment at the project site includes drill rigs and delivery trucks along with trenching and grading machinery.

The convention center project will require some changes in nearby roads. A portion of Broadway Ave. between 4th and 7th streets is being relocated to the east to provide more room for the new building.

Robinson Avenue will be redone as part of the project and the new Park on the other side of the avenue.

Glazing will help in energy efficiency at the convention center. The main western façade will have a significant amount of glazing, which brings in natural light to the meeting and pre-function spaces, while also providing views to the new Park.

The difference between window and glazing is that a window is an opening, usually covered by one or more panes of clear glass, while glazing is the part of a window or wall made of glass or another transparent material.

At the new convention center, crews will install the highest-performing glazing to control and maintain energy efficiency from direct sunlight.

Wayfinding stations inside and outside the convention center will be interactive to help guide visitors.

The new convention center is part of the city's MAPS 3 construction program. MAPS 3 is a $777 million, debt-free capital improvement program to improve the quality of life in Oklahoma City. It is funded by a 1-cent sales tax initiative that began in April 2010 and ended in December 2017.

The new convention center is expected to have a positive impact on the area. It will boost business at hotels, restaurants, entertainment, food and beverage suppliers, temporary employment services, audio-visual services, destination management companies, rental cars, taxis and transportation providers, linen supply companies and retail stores of all kinds.

"Estimated staffing for the center will be 65 full-time, 20 permanent part-time, and 24 on-call," said Michael Carrier, president of the OKC Convention and Visitor Bureau.