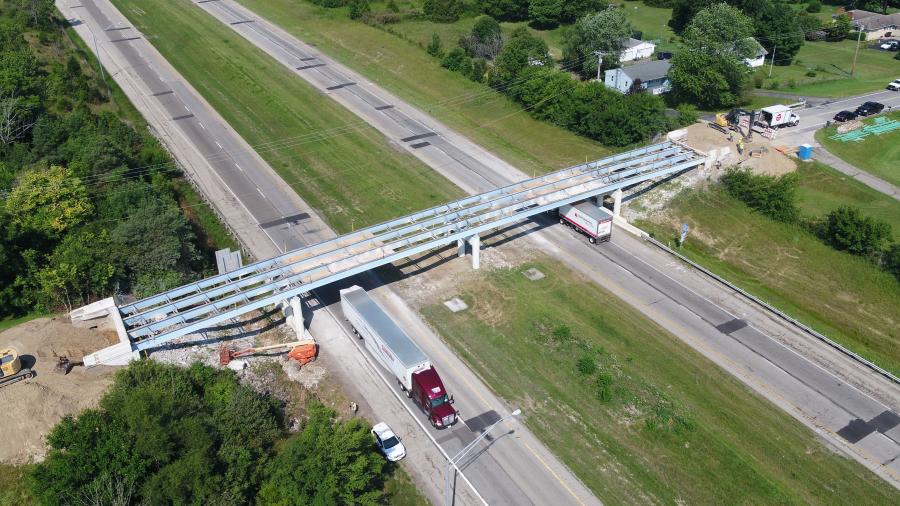 There are 22 structures being addressed on this project. (ODOT photo)

Construction crews are busy working on a $29.8 million rehabilitation project that includes repairing pavement and resurfacing Interstate 70 in Preble County, from the Indiana state line to the Montgomery County line in Ohio.

"Ohio has a vast network of roadways and bridges," said Kathleen Fuller, ODOT public information officer, "and with the fourth largest interstate system in the country, rehabilitation projects such as this are necessary for the preservation of the interstate transportation system and to further ODOT's mission to provide for the safe and easy movement of people and goods from place to place." 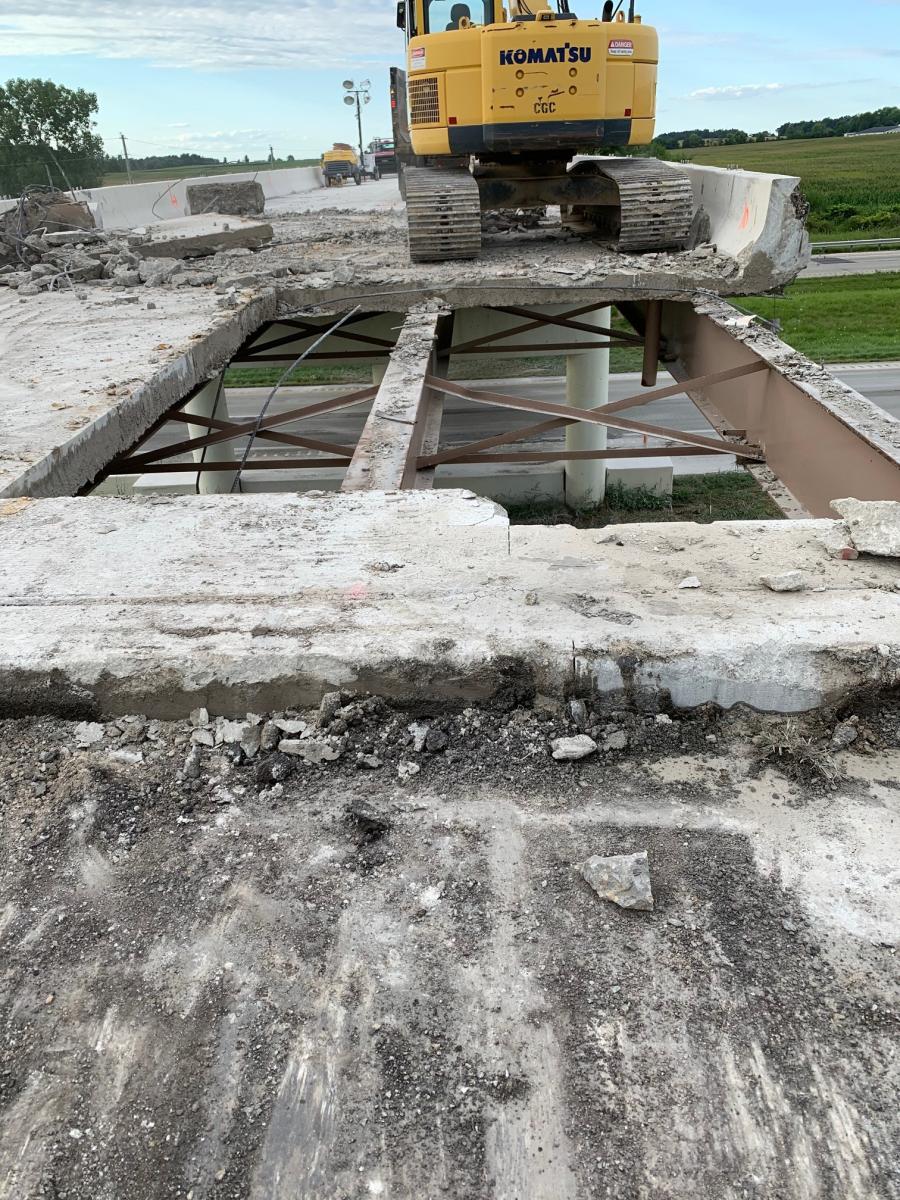 The pavement work focuses on the mainline and all ramps within the project limits, while bridge work will include painting and replacing the decks of the S.R. 320 and S.R. 726 structures over I-70. Minor bridge work, including patching, sealing and bearing replacements, will be undertaken on approximately 20 other structures. Rest areas and existing weigh stations also are included in the project.

"Like the majority of our programmed projects, development takes place years in advance of actual construction and it begins with a work plan that establishes resurfacing priorities based on objective data that uses traffic volume and pavement condition to help determine paving treatments and locations and ultimately to help us make better decisions when spending taxpayer dollars across the entire state," said Fuller.

A great deal of the work on the mainline (I-70) will take place during the late evening and overnight hours, when traffic volumes are lower, to minimize the impact to motorists. The closure of the rest area for paving work greatly affected motorists, especially those in the trucking industry who use the stop upon entering Ohio. However, the contractors worked to stay on course and complete operations in a timely manner, to reopen the rest area within six weeks.

Fuller said drivers have been doing their best to deal with closures and delays.

"We have found that motorists have been responding very well to the traffic impacts and the maintenance of traffic plans for single-lane restrictions on I-70, as well as the current roadway closures of S.R. 320 and S.R. 726 for bridge work. The detours for both routes are easy to navigate and given the advance notifications and the appropriate signing, we don't believe there to be any major issues with the plan."

The average daily traffic (ADT) count for this stretch of I-70 ranges from approximately 38,000 (at the Indiana state line) to 41,000 vehicles (at Montgomery County).

"Overall, construction is progressing very well, and we have not had any major delays with the respect to the total project timeline," said Fuller, who noted that the work involves two ODOT districts.

"Whether it's construction and maintenance or planning, design, environmental and right of way, ODOT's district offices and central office divisions work together to share the workload, as well as their experience and expertise, to fulfill the department's mission. As ODOT District 8's Preble County abuts the counties in District 7, bringing their construction team in to administer this project has been an asset for District 8, and is one of the many examples of our agency's teams working together to be one ODOT."

Fuller explained that the bridge work taking place is key to the overall project. 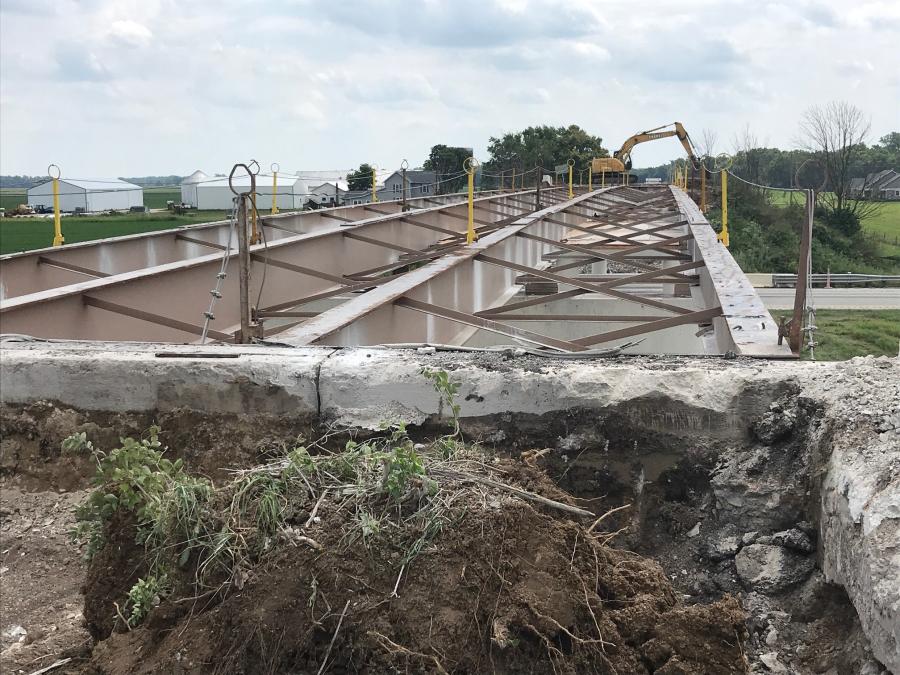 "It goes hand-in-hand with the overall rehabilitation project. We have a tremendous bridge inventory in Ohio and our team of bridge engineers and specialists inspect our bridges annually to assure the safety and integrity of all structures. It's imperative that we make sure we are providing the best bridge conditions we can. When developing any paving project, we use the condition rating information provided by our bridge department to determine when repairs will need to be made and the extent of these repairs. It's also important to undertake these repairs during a pavement rehabilitation and resurfacing project in order to provide a smooth, seamless product and maximize our overall efficiency.

"We are committed to seeing this project through to its completion, and in partnership with the contractors, we will work to deliver a successful, quality project in a safe and timely manner."

According to Roger Riffell, ODOT project manager, there are several concerns related to the ongoing effort.

"One of the greatest challenges is performing work on a heavily-traveled interstate under live traffic, where the danger to the crews and the traveling public is always present. Another tremendous challenge, specifically with this project, has been its location at the Ohio-Indiana state line, and the proximity to another project on I-70 by the Indiana DOT.

Traffic queues can be as long as 7 to 10 miles, backing into the work zone in Ohio.

"We also are replacing two state route bridge decks over the interstate at the same time and this requires a great deal of coordination. Also, the rehabilitation of a four-lane section of U.S. 35 coming off of the interstate, coupled with other closures and restrictions in the same area, present challenges for motorists traveling through the area."

Regarding the August closure of both routes (320 and 726) because of bridge work over I-70, the first step was to issue a traffic advisory through the construction department to staff in the various affected district offices and to ODOT's hauling permits division in the central office. 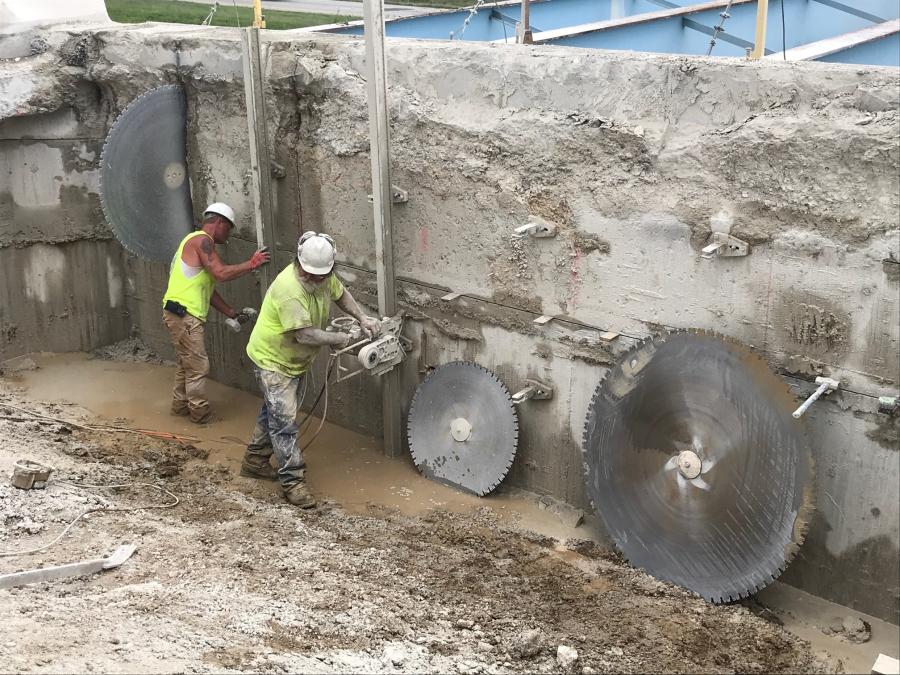 As for resurfacing and repairing pavement on I-70 from the Indiana state line to the Montgomery County line, repair areas have to be identified and corrected before any milling or asphalt replacement is placed.

"This effort is to eliminate underlying issues to the pavement and extend the life of the new pavement. Some of the repairs go down to the bottom of the original concrete roadway, repairing damage from years of heavy traffic and weather-related effects on the pavement. In addition, a very large part of each work shift is to establish a work zone that separates the workers from the traveling public."

As part of the project, crews must rehabilitate and repair bridges within the work limits and pave the rest area and weigh station.

"The rehabilitation of the mainline bridges ranges from sealing cracks in the deck, repairing structural concrete, sealing the entire deck surface and resetting and/or replacing the bridge bearings. There also will be some surface concrete repairs on the decks. These structures overall are still sound and only need minor work to maintain their longevity.

"The rest area had some concrete slabs replaced due to deterioration and severe cracking and spalling. There were many concrete joints repaired to maintain the integrity of the joints. The entire truck parking lot also was restriped and the weigh station will be milled and new asphalt placed with repairs done as needed."

Many tasks remain; however, the renovation of the eastbound rest area has been completed. Currently, both the S.R. 320 and S.R. 726 bridges have had the concrete decks removed. Crews are now concentrating on removing and rebuilding the back wall, beam seats and the wing walls. There have been several of the mainline bridges that are complete with bearing replacements and a large portion of the pavement joints have been done, preparing the surface for the mill and fill. 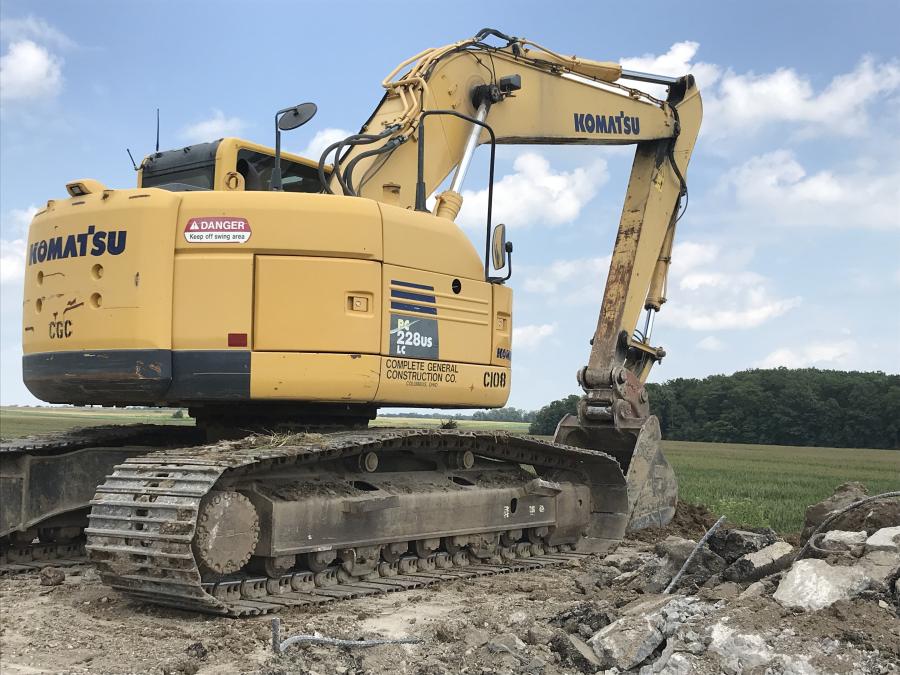 The bridge replacements are scheduled to be completed this year, along with all pavement repairs. During the 2021 construction season, all electrical work and upgrades and paving should be finished, scheduled to be completed by the interim completion in mid-October 2021. Then, the following year, all permanent striping will be installed prior to the project completion.

Pavement equipment being used during construction includes a Wirtgen W250 milling machine; an Elgin Pelican sweeper; a 13-ft. Roadtec shuttle buggy; a 20-ft. Cat AP1055F tracked paver; an 18-ft. Bomag BW161AD-5 66-in. roller; a JD broom tractor; and distributor and water trucks. So far, for the bridge work, a Komatsu 228 excavator is on site.

The many types of equipment being used range from earth moving equipment and demolition to paving and concrete placement. The primary materials that will be used on this project include asphalt, tack, concrete, aggregate and paint.

Riffell said the two bridges that are to be replaced required full demolition except for the actual bridge beams.

"The structural integrity of the beams allowed them to be reused, saving the project money. The U.S. 35 portion of the project will include completely removing the roadway and starting to rebuild at the base. This will allow the roadway to serve the public longer, as it stabilizes the new roadbed.

Approximately 20,000 cu. yds. of dirt/material will be moved on the project. Most of the excavation will be done on U.S. 35, Phase 2 of the project, in which the old roadbed will be completely removed and replaced. There also will be removals at the old westbound rest area.

"This will be reconstructed to remove the old entrance and exit ramps to the rest area, which is already closed. The bridge replacements also will have excavation to replace concrete back walls and wing walls."

Riffell said the most time-consuming part of the work involves asphalt patching.

"The road needs examining to determine what areas need repair and then night crews have to set up zones to complete the work. These zones are only allowed to be two miles long, so within a 17.67-mi. project, that is across four lanes and includes interchange ramps. It takes an enormous amount of planning and manpower to make this work. The work zone set up also will have to be done for the mainline paving."

Riffell said completion of the work in the rest area was a significant milestone for the traveling public, especially for those in the trucking industry. 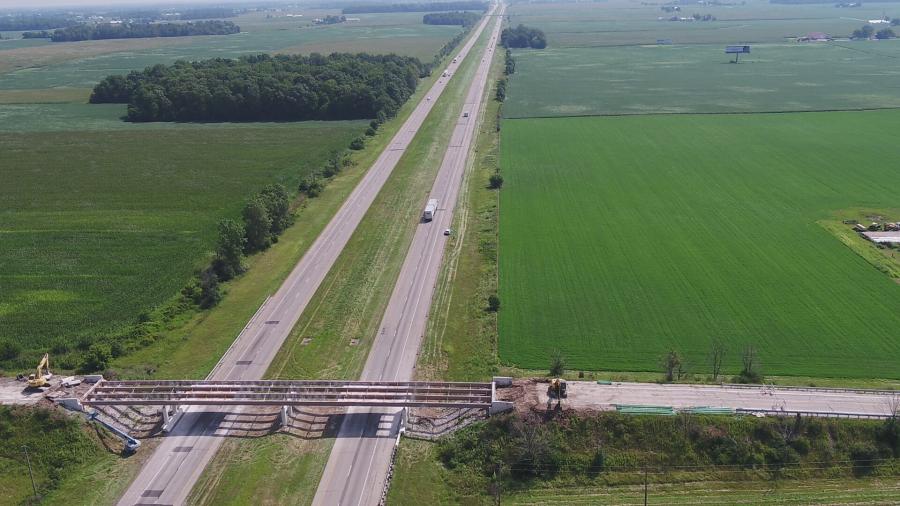 "It's our understanding that the parking lot is usually full every night with truck drivers, so having this restored and reopened for truckers to safely pull off and rest was a tremendous benefit. The completion of the bridges will be a major milestone for the local customers. The largest impact will be felt when the mainline asphalt replacement is completed. The age and wear and tear on the existing surface was quite evident and needed to be addressed."

"The company, established in 1934, has a reputation in the tri-state area for providing quality commercial and industrial work," said Riffell. "The company also has acquired asphalt plants and stone quarries, so this ability to check and test for quality control is an asset to providing a good product and service."

Riffell added, "Beyond the actual hard, physical labor required to complete such a project, there are years of preparation involved. This includes many hours of onsite review of the structures and the rating of the asphalt condition. Individuals from each department involved must complete their inspections and rating of the existing conditions. Once a decision is made to proceed with a construction project, other departments become involved, including environmental, real estate, planning, design and many more."

Construction began in May 2020 at the eastbound rest area. The scheduled project completion date is May 31, 2022. CEG