Nearly 5,000 lbs. of explosives were used to blast the Georgia Dome in Atlanta to smithereens at 7:30 a.m. 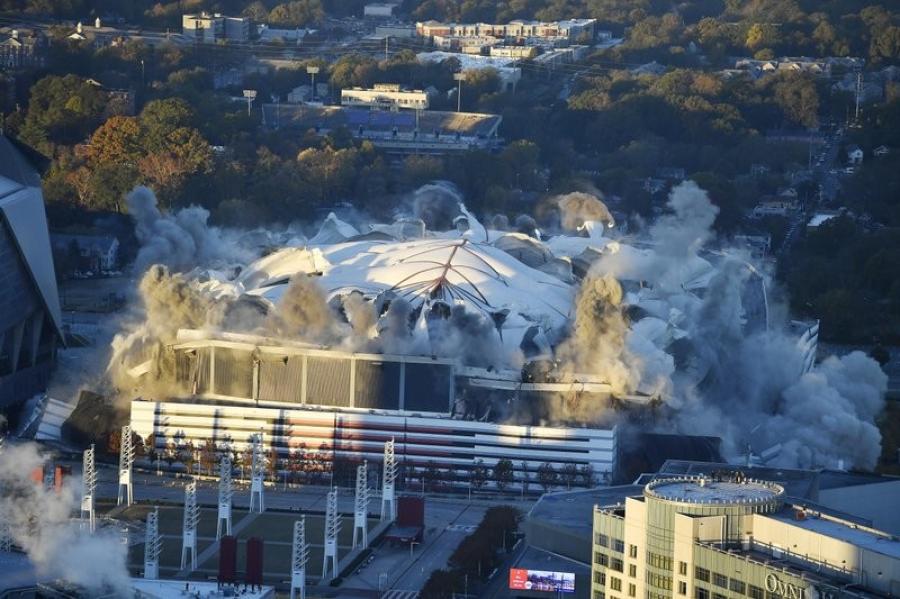 The dome opened in 1992, and it was flattened in just about 15 seconds.

ATLANTA (AP) — One of the nation's largest domed stadiums collapsed Nov. 20 into a pile of jagged concrete and a vast cloud of smoke in a scheduled implosion in downtown Atlanta.

Nearly 5,000 lbs. of explosives were used to blast the Georgia Dome in Atlanta to smithereens at 7:30 a.m. Onlookers gathered at skyscrapers' windows, at a revolving hotel-top restaurant, in parking lots and on nearby streets to watch the controlled destruction of the landmark stadium.

The dome opened in 1992, and it was flattened in just about 15 seconds. The Georgia World Congress Center Authority, which includes the 71,250-seat dome, had said it would take 12 seconds for the explosives to go off plus another 3 seconds for sections of grandstands to hit the ground.

The explosives went off in a spiral around the stadium as it collapsed on itself. A vast debris cloud hovered over the site before slowly drifting across downtown.

Take a look at this video of the implosion:

The dome has been replaced by the $1.6 billion Mercedes-Benz Stadium next door.

A 5-story tall industrial strength curtain between the two stadiums had been erected to protect the new venue from damage, officials said. Only 83 ft. — less than 30 yds. — separated the two venues.

The new stadium is home to the NFL's Atlanta Falcons and Major League Soccer's Atlanta United.

In addition to the retractable roof that opens like a camera lens, Mercedes-Benz Stadium boasts a 1,100-ft. “halo board” video display and a giant steel sculpture of a falcon with its 70-ft. wingspan at one of the main entrances.

Several streets and parts of Atlanta's transit system were closed to accommodate the blast and spectators.

The idea for the Georgia Dome dated to the mid-1980s, when civic leaders recommended a domed football stadium adjoining the city's largest convention center, the Georgia World Congress Center.