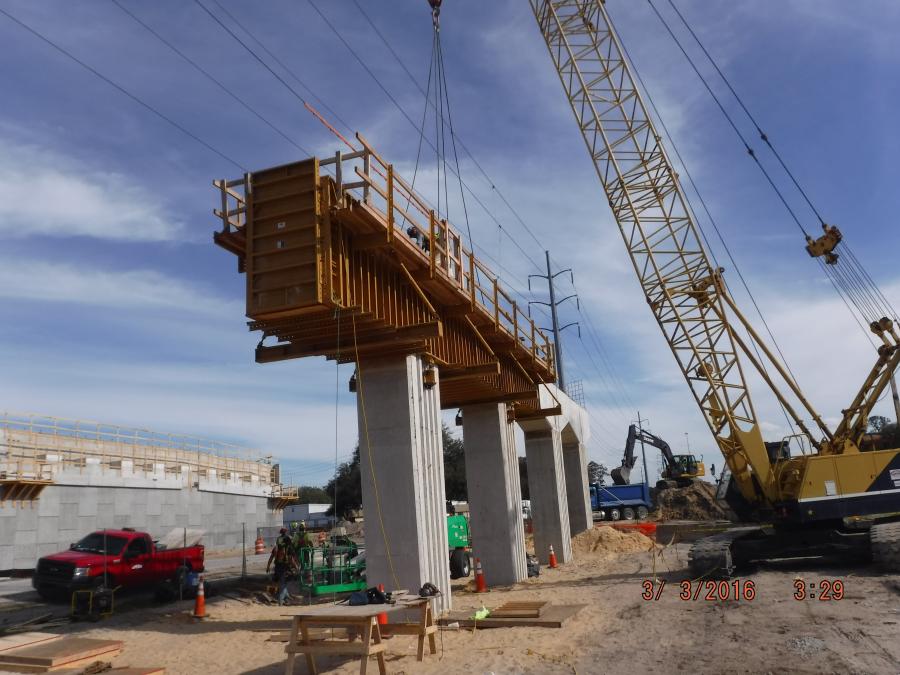 In Gainesville, Fla., construction equipment dots the landscape as work continues on a one million sq. ft. mixed-use development known as Celebration Pointe. The estimated $300 million, multi-phase project spans 125-acres, and includes a bridge that will provide a second major access point in addition to the main entrance at West Archer Road just off I-75.

“We are finishing up the last few tasks of the bridge, which include final paving, striping of the lanes, setting light poles and installing safety railing along the sides,” said Eric Brown, Hoar Construction senior project manager. “There's also a new roundabout at the east side of the bridge that ties it into an existing roadway that leads to additional retail shops.”

The development will be anchored by Bass Pro Shops, which opens this fall and a luxury, ten-screen movie theater set to debut fall of 2017. The development will ultimately offer 300,000 sq. ft. (27,870 sq m) of office space, multi-family apartments, along with retail, restaurant and entertainment space. The dining experience will feature a combination of local and national restaurants, bakeries and a wine bar. In addition, the 137-room Hotel Indigo will open in first quarter 2018.

“Our job is to complete the roadway infrastructure to get shoppers to and from the store, including the completion of the bridge,” said Brown. “We have to install the main roadways, landscaping and irrigation and street lighting. As this is going on, we are working on a three-story LEED Silver office building and getting ready to break ground on another LEED office building.”

The bridge will connect Celebration Pointe to other major arterials leading to and from significant points of interest in Gainesville, including its major healthcare corridor, central business district and the University of Florida. About 30 weeks of night work was performed on the bridge project. Crews started on the structure in April 2015. Work is ahead of schedule, and will be complete for a November opening.

The main portion of the bridge has four lanes of vehicular traffic and one rapid transit lane in the center for bus traffic. It spans 437 ft.

Brown said the biggest challenge on a project like this, which works over an active interstate highway, is to keep all of the members of the project team safe.

“Once the main beams are set, we divert traffic off the highway at night, and provide a detour until early the next morning when we have to be ready to open the highway back up, Brown said. “We can only set a beam or two at the most on any given night.”

Workers had to demolish a few existing warehouse buildings, which were in the location where the bridge was designed to land.

Battling the elements has also been an issue for crews. Brown said Hurricane Hermine and another week of heavy rain cost crews almost two weeks of work that they've had to find ways to make up for, since the opening date for phase one remained the same.

Not surprisingly, a large amount of material is being moved during construction.

“We are still hauling dirt in and out, but a rough guess is well over 300,000 cubic yards,” said Clayton Waters, Hoar Construction superintendent. “We have had in excess of 19,000 dump truck loads hauled in, and three 30-yard off-road dump trucks have moved it around on site.”

Waters said all the rough grading was performed with two Cat D6s, a D6N and a D9 dozer. The finish grading for the roads and parking is being carried out using three motorgraders. Materials being used on the project include mostly concrete on the bridge, and typical roadway work in the land development portion, which includes lime rock base, concrete and asphalt.

Pre-development site work for the project began in August of 2014. Vertical construction for the initial phase of development began in 2015, with Phase I of the project scheduled to open in fall 2016.

According to Noel Cupkovic, AIA, principal, CUPKOVIC architecture LLC of Cleveland, Ohio, the vision was to evoke the client's vision for the project — a mixed-use project organized around a framework of a street grid with dedicated open space that's walkable, organic in nature and reached out to the greater community.

“The biggest challenge from a design perspective is scale. The developable area for the project is approximately 130 acres. In years past, we would design urban mixed-use projects and one and two-story regional mall sites that encompassed 20 to 50 acres, but this is a much larger site. The good news is that with the framework we established, we were able to carve the large-scale site into different and distinct areas. They include the entertainment district, the retail shops, the retail commons, the retail/ mixed use Main Street, City Walk residential and Urban Flats residential and Technology Park, a dedicated open space with office buildings and a hotel surrounding the park, an active space for daytime and evening use which complements all the uses in the development.”

Cupkovic said the firm is the master plan architect, as well as the design and executive architect for a good portion of the buildings.

“Mixed-use projects require the architect to work with the local municipality regarding the entitlement and zoning for the development. It requires being able to lay out multiple building types. The project design team must have expertise in planning, building design, building and zoning regulations, as well as landscape and hardscape design.

Cupkovic described the design approach as modern, making it easier to juxtapose a number of different buildings with a modern language.

“With the mix of uses, office over retail, residential over retail, standalone retail and office and at grade residential, this allows the resolved architecture to be massed and shaped in an interesting and appealing way.”

The team is pursuing LEED certification for neighborhood development for the site, with two of the office buildings seeking LEED Silver. Cupkovic also said the challenge of good design is to balance aesthetics with function and ultimately construction cost.

“We have a good owner who understands the value of some aesthetic design decisions. The functional aspect is more an understanding of proper ways to lay out these building types. The greater challenge of aesthetics and cost has to do with making a conscience decision to spend the dollars where they make the most impact.”

Ralph Conti, principal, RaCo Real Estate LLC and a development partner with Celebration Pointe, said the timing is right for the high-profile project.

“There's nothing like it in the market. Gainesville is growing and is primed and ready for a project of this nature. This is not being built necessarily for today, but for the future. It's a major undertaking.

Gainesville's workforce is made up of 52 percent white-collar workers, set to increase with the city's Innovation Hub goal of 6,000 new jobs in the next five years. The city has high numbers of households earning more than $150,000 a year, and serves 1.7 million commuters and shoppers from 11 surrounding counties. Additionally, Gainesville is home to the University of Florida's 50,000 students who each year spend an estimated $790 million locally.

“We're building something here that hasn't been done before. This is a unique hybrid project, and the market is ready. It's going to serve all of North Central Florida, which is a pretty wide group of people. And the bridge will play a big role. It's a major public infrastructure, providing secondary access to the project, and is a key piece to the overall traffic plan,” said Conti.