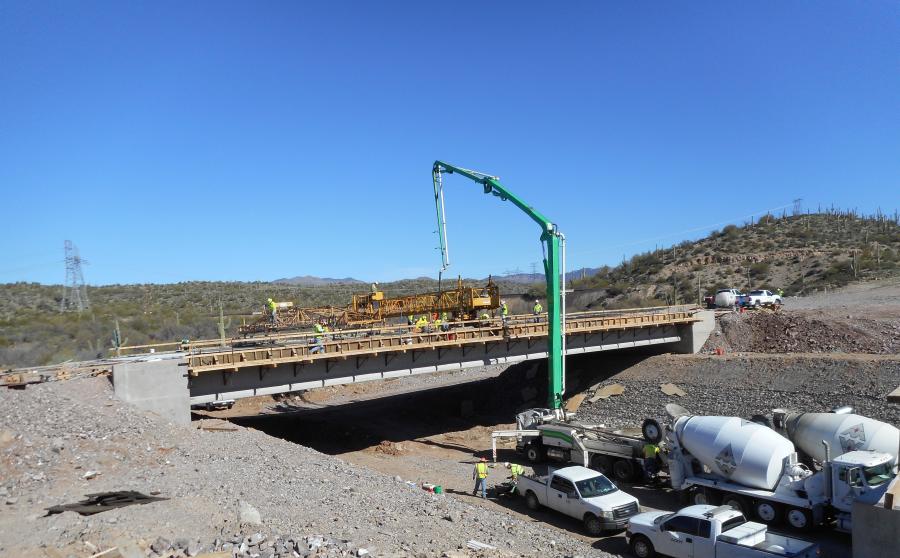 Crews in Arizona are rebuilding a 6-mi. stretch of U.S. Route 60 from Queen Creek east through the town of Superior to the junction with state Route 177. (FNF Construction/ADOT photo)

Crews in Arizona are rebuilding a 6-mi. stretch of U.S. Route 60 from Queen Creek east through the town of Superior to the junction with state Route 177.

The project started in September 2015 and extends the divided four-lane (two lanes in each direction) highway west to Silver King Road at the western boundary of Superior. The population of the town — located 55 mi. east of Chandler — stands at 2,837, according to the 2010 census.

“The work is scheduled for completion ahead of schedule in the fall of 2017,” said Tom Herrmann, Arizona Department of Transportation public information officer.

The project includes a new section of two-lane divided highway north of the current two-lane highway, west of Superior. It starts near Boyce Thompson Arboretum and extends east before tying back into the current highway near Superior Airport.

The existing two-lane highway section has been converted to an access road leading to the Boyce Thompson Arboretum and abandoned to the east.

Workers initially focused construction on the new highway alignment on the west side of the project area before working their way east into Superior in spring of 2016.

By January of this year, motorists traveling both directions on U.S. 60 were moved onto a newly constructed westbound alignment of the highway between mileposts 222 and 225.

Construction is now nearly complete on the west side near Boyce Thompson arboretum.

“Temporary pavement markings are in the process of being placed,” Herrmann said.

• Happy Camp bridges in both directions at milepost 223;

• Silver King bridges in both directions at milepost 224;

• rehab and widening of bridge westbound at milepost 226; and

• construction of the Stone Avenue overpass for both directions of traffic at milepost 227.

Prime contractor for the project is FNF Construction of Tempe, Ariz. The company was low bidder for the work.

FNF's bridge building experience was a plus in constructing the Route 60 Silver King Road Project managed by the Arizona Department of Transportation.

About 75 workers are on the job each day, including some nights and weekends. Construction has required some lane restrictions, but no road closures or detours.

The project will require about 100,000 tons of asphalt and concrete and about 7,500 cu. yds. of concrete. No dirt will need to be brought in.

The project is designed to improve the roadway and make U.S. 60 safer and less congested in the Superior area. The highway is a primary route connecting the Phoenix area with eastern Arizona.

The Route 60 Silver King Road Project expands on previous projects in the general area. In 2008 the Arizona Department of Transportation finished expanding the two-lane highway from Florence Junction to Gonzales near the Boyce Thompson Arboretum.