$4B Illinois Tollway Reconstruction Under Way 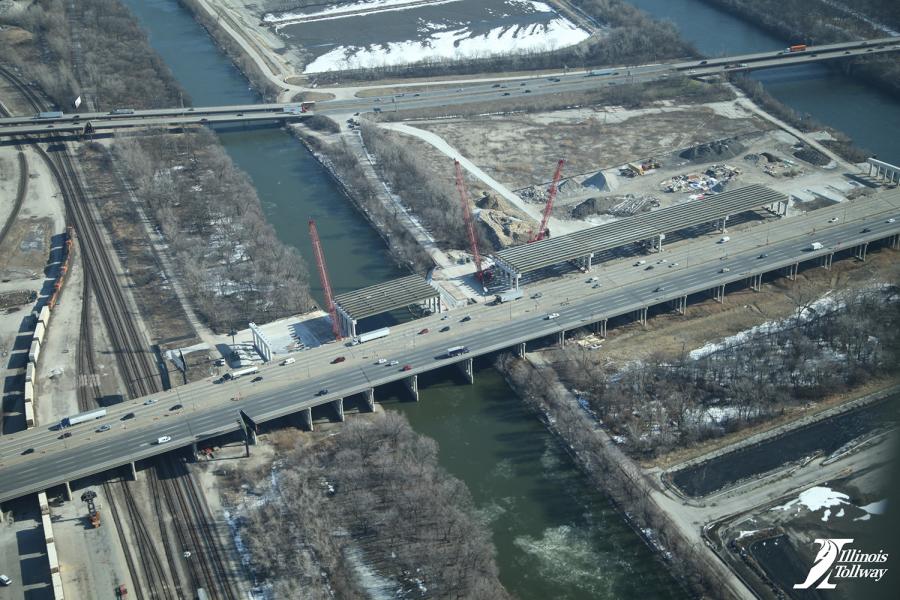 Work on the Central Tri-State Tollway project started in June 2018 and is anticipated to be completed in late 2026. (Brian Fritz Photography/Illinois Tollway photo)

The Illinois Tollway's $4 billion reconstruction of the 22-mi.-long Central Tri-State Tollway (I-294) from Balmoral Avenue to 95th Street will provide congestion relief and reconstruct aging bridges and other infrastructure to meet current and future traffic demands, while also addressing regional transportation needs in the western Chicago area.

Work on the project started in June 2018 and is anticipated to be completed in late 2026. It is part of the Tollway's 15-year, $14 billion capital program Move Illinois: The Illinois Tollway Driving the Future. 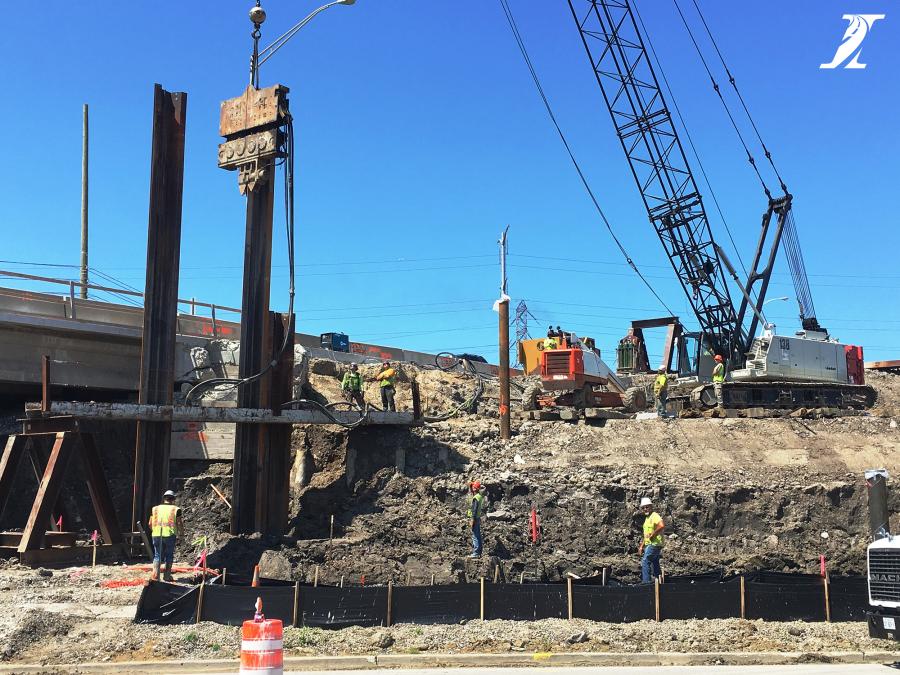 "This project will replace an outdated, heavily congested roadway with a modern, 21st Century corridor that will serve as a vital link in the region's transportation network while allowing customers to travel more safely and efficiently for decades to come," said José Alvarez, Illinois Tollway executive director. "Rebuilding and widening I-294 at this time also allows us to address regional and local issues, particularly relieving traffic congestion on local roads, improving drainage and increasing access to neighboring communities."

This section of I-294, along with the bridges, opened to traffic in 1958 and provides four lanes in each direction. It is the most heavily traveled roadway in the 294-mi. Tollway system, supporting as many as 360,000 vehicle trips daily, including more than 24,000 daily trips by commercial trucks. The upgraded road will meet traffic demands for 2040, which are projected to be about 15 percent higher than current traffic volumes.

Solid progress has been made since construction began, with a key element of that work consisting of repairing, resurfacing and widening I-294 to five lanes between Balmoral and Wolf Road in Franklin Park. The reconstruction of the Mile-Long Bridge between Hodgkins and Willow Springs and the Burlington Northern Santa Fe (BNSF) Railway Bridge in Hinsdale and Western Springs started last year (2019). At both locations, traffic, including freight and commuter rail traffic, will be maintained during construction.

In the northern section of the project between Balmoral Avenue and North Avenue, the Tollway will continue repairing pavement, rebuilding and widening roadway, as well as reconstructing shoulders, adding Flex Lanes in both directions and replacing or adding median barrier walls. The bridges at Irving Park Road, Lawrence Avenue and the Canadian National Railway in Schiller Park will be rehabbed and widened as needed to accommodate additional lanes. Improvements will be made to local crossroad bridges, including Balmoral Avenue and Wolf Road. 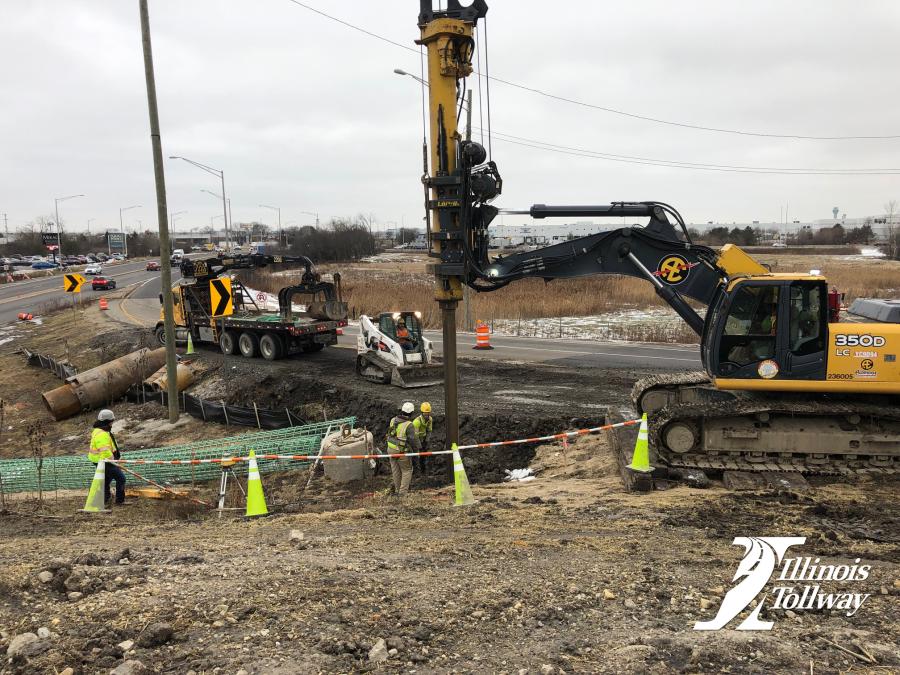 The O'Hare Oasis over-the-road pavilion was removed to accommodate I-294 roadway widening. Ramp improvements include reconstructing portions of the ramps connecting the O'Hare Oasis and Irving Park Road to I-294, as well as coordinating with Cook County's North Avenue Interchange Project. The Tollway also will make noisewall, guardrail, drainage, lighting, signage and landscaping improvements.

In the project's central section between North Avenue and I-55, improvements will include roadway reconstruction and infrastructure upgrades, while the I-290/I-88 Interchange at I-294 will be reconfigured and improved. I-294 generally will be widened to six lanes in each direction between I-290 and I-55, with the inside shoulder widened to also serve as a Flex Lane. The Hinsdale Oasis over-the-road pavilion will be removed, bridges carrying the BNSF Railway over I-294 will be reconstructed and lengthened, and improvements will be made to local crossroad bridges, including St. Charles Road, Cermak Road, 31st Street, Ogden Avenue, 47th Street, 55th Street and Plainfield Road.

Work planned for the southern section of the project between I-55 and 95th Street includes reconstructing and widening the Mile-Long Bridge from four lanes in each direction to five lanes. In this area of the project, the Tollway will rebuild and widen roadway and reconstruct shoulders, including adding Flex Lanes in both directions. The Tollway also is working with the Illinois Department of Transportation and the Village of Justice to build a new interchange at 88th/Cork Avenue. Improvements will be made to local crossroad bridges, including Willow Springs Road, 5th Avenue, Archer Avenue and 55th Avenue. 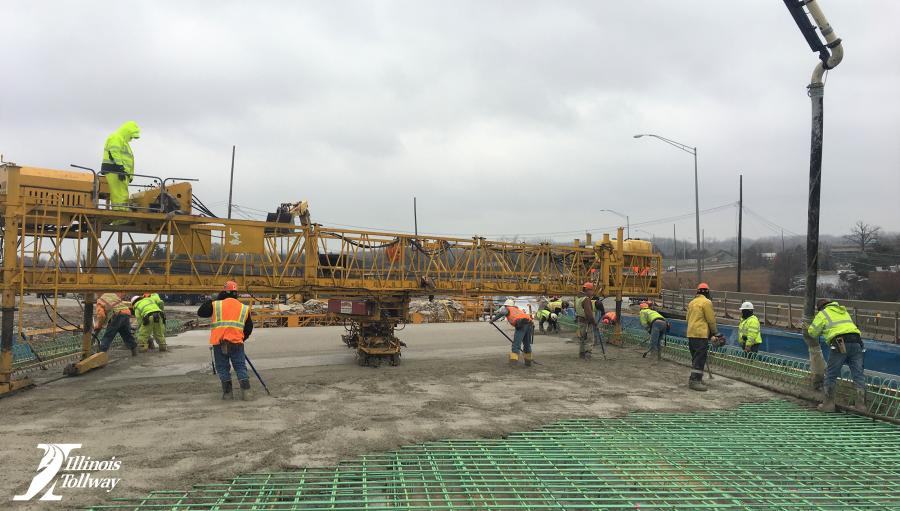 "Our highest priority is ensuring the safety of our customers, employees, emergency responders and the workers rebuilding our roads," said Alvarez. "We want to remind drivers that they must follow work zone speed limits regardless of whether workers are present and obey the state's Move Over Law, which requires them to slow down and change lanes, if possible, when approaching any vehicle stopped along the road with its hazard lights activated."

A $184.5 million contract to replace the northbound portion of the Mile-Long Bridge was awarded to F.H. Paschen, S.N. Nielsen & Associates LLC. A separate $77.5 million contract for replacing the BNSF Bridge, a triple-track structure built in 1950s, was awarded to Walsh Construction Company II LLC. Additional contract bidding is anticipated in 2020 for work to complete the Mile-Long Bridge reconstruction.

To accommodate reconstruction of the Tri-State Tollway, the existing BNSF Bridge will be replaced with a longer, wider, two-span steel beam structure that will accommodate four tracks over the Tollway. 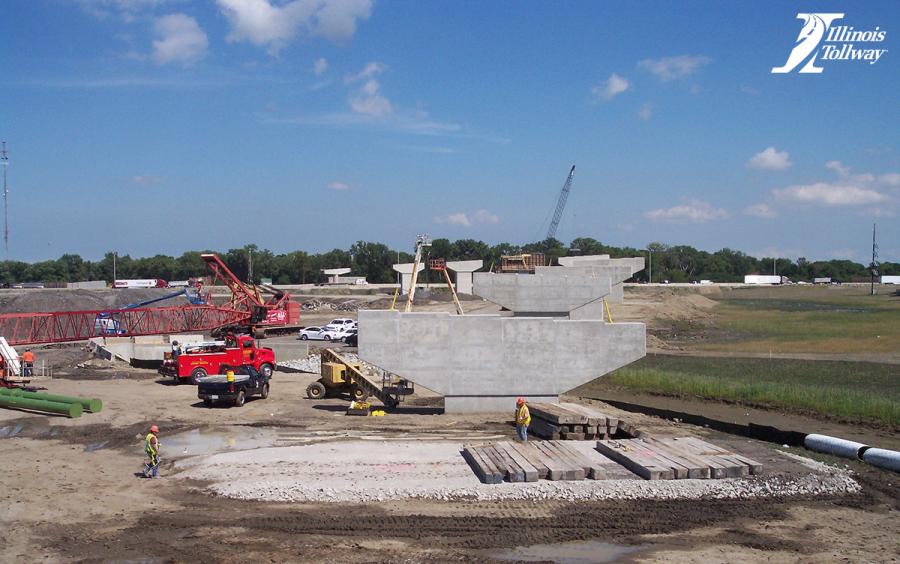 "Reconstructing the bridge is a critical part of the project that will allow for improvements to be made to this portion of I-294, which is one of the busiest sections of the Tollway," Alvarez said.

The work includes the ongoing construction of the bypass bridge, also known as a "shoefly," that will allow for uninterrupted commuter rail and freight operations during bridge reconstruction. Once the bypass bridge is completed, the existing bridge will be removed and the new bridge will be opened in 2022. On average, approximately 104 Metra and Amtrak trains cross this bridge daily, as well as 52 daily freight trains.

The project is being coordinated with IDOT, Metra, BNSF, Cook County, local municipalities, park districts, and police and fire departments.

Brian Fidoruk, Walsh's project manager, is aware of the many challenges his crews will encounter.

Before construction can start on the bypass bridge, work is ongoing to install drainage infrastructure and a portion of the upfront conduit required for ITS fiber relocation, which will create temporary access for crews and equipment.

"We've put in 48-inch RCP structure, temporary head walls and drainage," said Fidoruk. "Once things get going, we'll be tying that into the section that is pipe jacked underneath the railroad, which ties into the Western Springs drainage and watermain system."

The shoefly construction will result in two permanent track bridges and two temporary track bridges — each about 150 ft. long — that will be slightly longer than the current bridge. Temporary abutments will be placed and lane closures will be required for the steel erection and welding of the diaphragms and deck plates.

Train traffic will be constant throughout the construction and Walsh will be coordinating its efforts with the railroad and BNSF permits will allow crews to work within 25 ft. of the closest track. 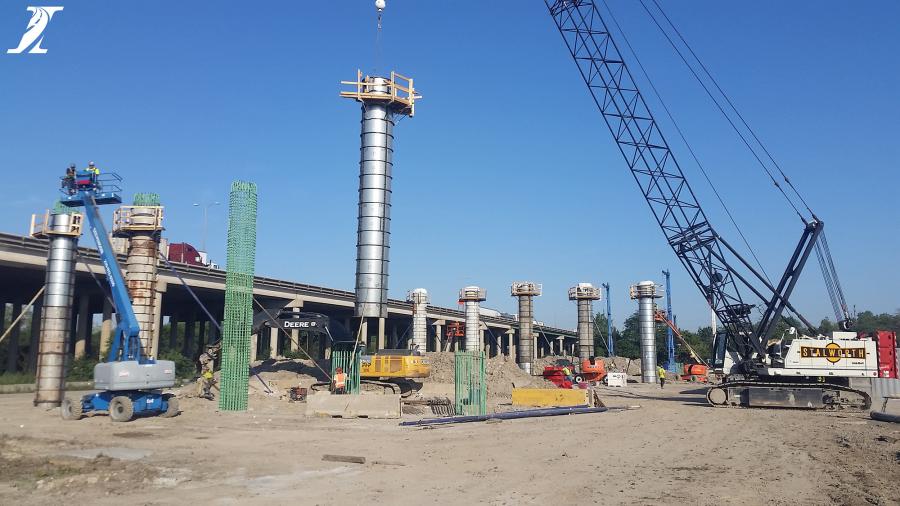 "We'll be coordinating with them on a daily basis," said Fidoruk. "It's a congested work area. We have a small laydown area off the Tollway's mainline area. Cranes, drills and all kinds of equipment we'll be operating in a tight space. We're looking at bringing materials via staged deliveries because we don't have the laydown space. We've essentially off-sited our main equipment yard, which is in downtown Chicago on the south side of the city."

Once the shoefly is built, BNSF will have five months to lay the new track and establish the new tie-ins.

The demolition of the existing bridge is expected to start in early 2021.

"We don't have a full demolition plan submitted yet, but we have the requirements for the engineering plan from the Tollway and BNSF," said Fidoruk, who noted that Alpine Demolition is responsible for this element. "They will be cutting and sawing sections and taking out diaphragms and beams."

BNSF may re-use some of the beams for other bridges.

The new bridge, to be built on the same site, will be similar in design and be a bit wider and longer to meet modern standards.

"The design challenge is to make sure the elevation does not change too much to impact the grade alignments," said Fidoruk. "The current plan is that the center pier will be constructed first and then we'll start on the abutments on either side, followed by the setting of the beams."

Winter work was limited to the foundation and the substructure, with welding to occur during the spring and summer. 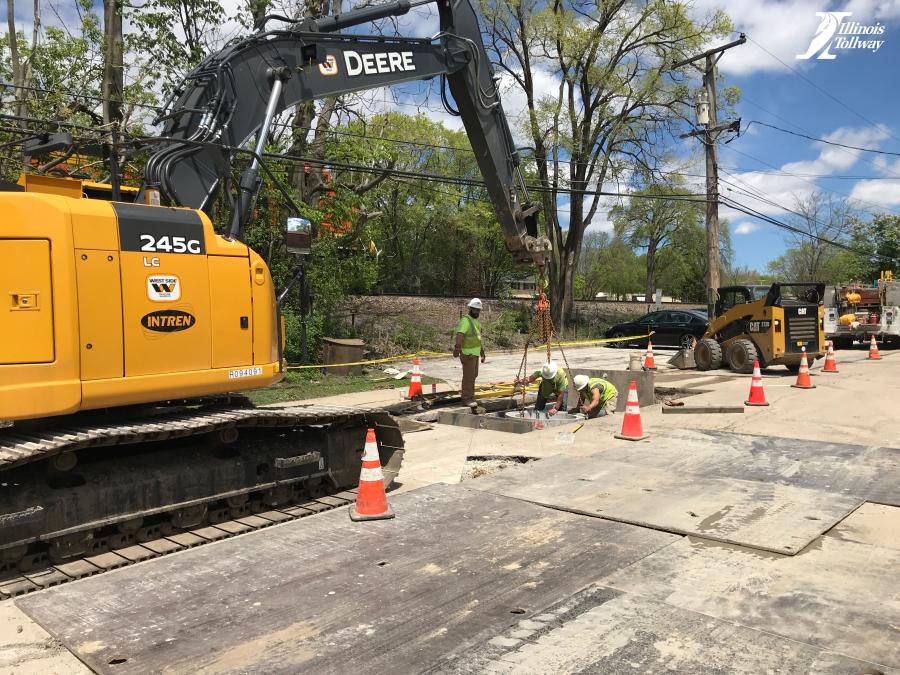 The amounts of materials to be removed and brought in — concrete, steel and fill — are still being finalized.

"We have six to eight mechanics in the region who are dispatched from our main yard and they can be at the site pretty quickly and handle whatever comes up," he said. "For jobs that are a little more maintenance heavy, we'll have a mechanic on-site."

"We're somewhat self-sufficient on the maintenance and repair side," said Fidoruk. "Our regional equipment manager, Kevin Berger, works closely with the dealerships to keep things moving in the right direction."

Contracts for other portions of elements of the work have been awarded to TranSystem/HR Green and Gannett Fleming. CEG