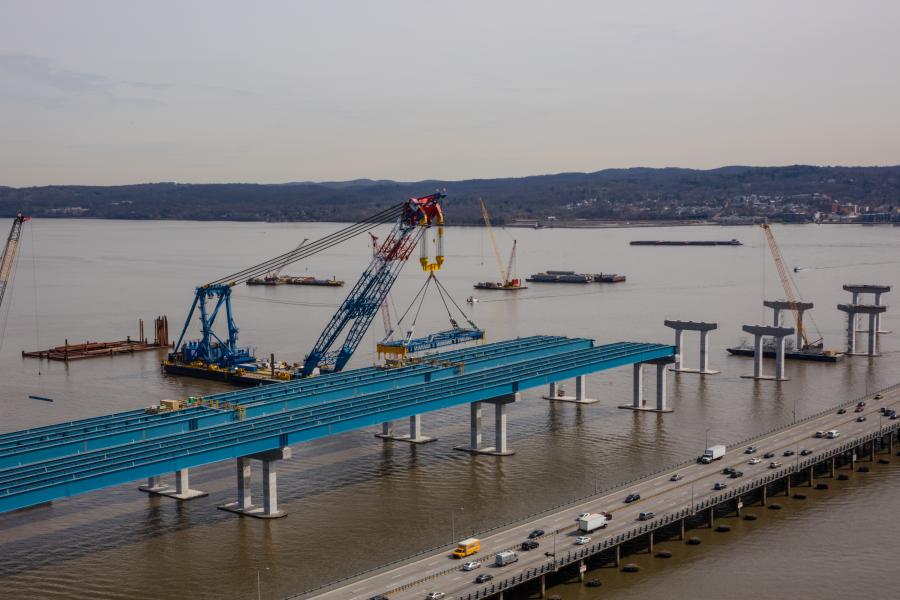 The New NY Bridge project continues to move forward (and upward) in the process of creating a modern, twin span replacement for the 3.1-mi. (5 km) Tappan Zee Bridge across the Hudson River. Work is reportedly on track for the 2018 opening, and remains within the $3.98 billion budget.

Since construction operations began in late 2013, prime contractor Tappan Zee Constructors LLC (TZC) has utilized more than 620 New York companies to help build the new twin-span bridge between Westchester and Rockland counties. Over 5,000 people have worked on the project so far.

Most of the substructure work, including piles and pier columns, is now complete. Progress continues to place steel-blue girders, road deck panels and segments of the iconic 419-ft. (128 m) main span towers.

According to the project website, the existing Gov. Malcolm Wilson Tappan Zee Bridge opened to traffic in 1955 and is a vital artery for residents, commuters, travelers and commercial traffic.

“Bridge traffic has grown to about 138,000 vehicles per day, far more than the Tappan Zee was designed to support,” the website noted. “Heavy traffic, narrow lanes and the lack of emergency shoulders can create unsafe driving conditions. As a result, the bridge has twice the average accident rate per mile as the rest of the 574-mi. [924 km] Thruway system. Hundreds of millions of dollars have been spent to maintain the structure in recent years. The cost of maintaining the current bridge for the foreseeable future rivals the cost of a new bridge, with no improvements to current traffic conditions.”

Plans for a new bridge to replace the Tappan Zee were first discussed in 1999. Over the following decade, although $88 million taxpayer dollars were spent, 430 meetings were held and 150 concepts were considered, the project remained stalled. However, in October 2011, new design-build legislation was enacted. Since then, a fast-tracked federal environmental review and concurrent procurement processes have been completed, a project labor agreement with construction unions was negotiated and construction activities began.

Extensive measures were put in place to protect the environment and to monitor the impact of construction on surrounding communities. Wildlife in the Lower Hudson includes endangered peregrine falcons, Indiana bats and Atlantic sturgeon. As a result, a permit process was put in place to help protect them all. The project team has worked closely with the National Marine Fisheries Service, the New York State Department of Environmental Conservation, and several other oversight agencies to establish the highest environmental standards and minimize the impact on the local environment.

TZC consists of a consortium of firms including Fluor, American Bridge, Granite and Traylor Bros., along with key design firms HDR, Buckland & Taylor, URS and GZA. The group is working closely on the project with a team of employees from the New York State Thruway Authority and the State Department of Transportation.

“Building two three-mile bridges across the Hudson River is an enormous undertaking, particularly with the challenging weather conditions that often exist on the water,” said Jamey Barbas, New NY Bridge project director, who works for the New York State Thruway Authority. “Ensuring the safety of workers and the public have always been our top priorities and we are extremely proud of the exceptional safety record on this historic project.”

TZC president Terry Towle agreed. “Tappan Zee Constructors LLC has worked more than six million hours with a total recordable incident rate of 0.63, which is well under the national average rate for a project of this size and scope,” he said. “We credit this achievement to the men and women who are focused on safety every day as they work to construct this mega infrastructure project.”

The four-hour operation was carried out by TZC's team of crane operators, ironworkers, engineers, electricians, mechanics and survey crews, as well as the I Lift NY super crane, the only crane on the project capable of raising a 750-ton crossbeam.

The crossbeams were fabricated by Coastal Precast Systems of Chesapeake, Va. There are two 70-ft. (21 m)-long beams for the westbound bridge (which includes the future bike-pedestrian path), and two 60-ft. (18 m)-long beams for the eastbound crossing. Weighing nearly 3,000 tons (2,721.5 t) in total, the four beams were cast on a floating barge, which then traveled from southern Virginia through New York Harbor and up the Hudson River earlier this year.

According to project officials, both the Tappan Zee Bridge and its replacement partially share the same footprint where they approach the shores of the Hudson River, posing a logistical challenge for project engineers. Originally, work on the new bridge's piers in these overlapping areas was planned for late 2017, after the existing bridge's demolition. However, the team developed plans to advance foundation construction in these areas. In April, the first such installation was successfully executed near the Rockland shoreline “in a bold overnight operation unlike any other on the project.”

Currently, all of the bridge's massive piles have been installed in the riverbed using large cranes and pile hammers, which require a great amount of overhead space. To overcome the low clearance under the existing bridge at the shoreline (just over 30 ft. [9 m]), crews temporarily removed two panels of the existing Tappan Zee's road deck, creating a work area without a ceiling that allowed for the installation of the replacement bridge's 75-ft. (23 m)-tall piles.

First, a floating frame was created to act as a template for the pier's foundations and provide a water-free workspace. The 12-ft. (4 m)-tall cofferdam was moved between two of the existing bridge's piers and secured using mooring lines in shallow water. The cofferdam's hollow, tub-like form was then drained of all water, and the dry work area was prepared for installation of the foundation piles.

Work began at 9 p.m. on Friday, April 29, and all of the pier's foundation piles were successfully installed and trimmed to the appropriate length by just after 8 a.m. on Saturday, April 30. The deck segments were then reinstalled, the lanes were reopened and traffic flow returned to normal.

If the current bridge were not being replaced, the state would need to spend an additional $3 to $4 billion over the next 20 years to ensure its structural integrity.

The existing bridge has only seven lanes, some of which are narrower than the current standard width of 12 ft. The new bridge will have eight 12-ft.-wide lanes. The incline over the main span will not be as steep, allowing large trucks to maintain consistent speed and reduce engine and braking noise. Gently banked curves also will help to smooth traffic flow and reduce accidents, and an All-Electronic Toll Collection (AETC) system will eliminate the need for drivers to slow down or stop at a toll plaza. In addition, the new bridge is being built with the structural capacity to handle commuter rail, light rail and bus rapid transit.

Funding comes from several sources. Gov. Andrew M. Cuomo announced that the state closed on a $1.6 billion long-term, low-interest loan through the U.S. Department of Transportation's Transportation Infrastructure Financing and Innovation Act (TIFIA) program in December 2013. At the time, this was the largest loan in the history of the program.

In addition, the 2015-16 New York State Budget included a $1.285 billion Thruway Stabilization Fund, paid from bank settlement funds. The remainder of the cost of the new bridge can reportedly be financed with Thruway Authority bonds. Like other Thruway capital projects, the bonds and the TIFIA loan will be paid back by future toll revenues.

The current Tappan Zee Bridge will be dismantled using the I Lift NY super crane, and the structural steel will be recycled. The concrete deck panels, which have been replaced in recent years, will be reused where possible on other Thruway and state Department of Transportation projects.

The New NY Bridge is being designed and built to last 100 years before any major structural maintenance is required.

The bridge will include several features to deter suicides. In addition to increasing the existing number of crisis hotline phones, the new spans will feature climb-deterrent fencing on all bridge edges, and steel mesh safety netting at the belvederes or scenic overlooks. A new high-tech video surveillance system also will be installed and monitored 24 hours a day, seven days a week.

Deck operations are scheduled to begin this summer when TZC places steel sections on which large road deck panels will be installed. Supported by steel cables, the structural steel and deck work will continue outward from the towers until meeting with the advancing approach spans from Rockland and Westchester.

TZC noted that an iconic main span will serve as the signature aspect of the bridge, with 419-ft. (128 m) towers and geometrically aligned cables. The outward incline of the towers will create a unique look and eliminate the need for an upper transverse tower strut — a structural element typical between two towers — adding to the open air experience while crossing the bridge.