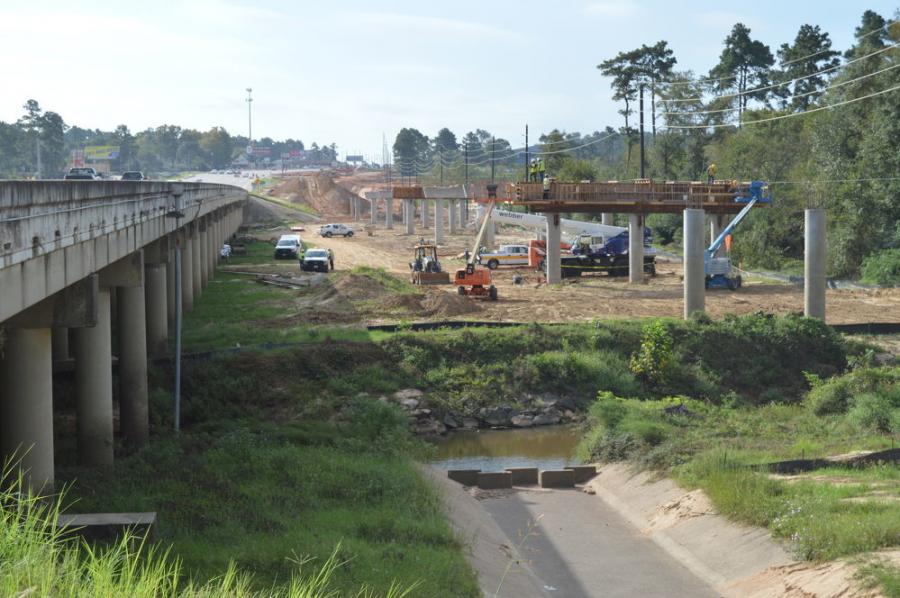 Crews will ultimately extend the highway from northern Harris County north through a portion of Montgomery County to Navasota in Grimes County south of College Station. SH 249 is better known as the “Aggie Expressway.” (Harris County Toll Road Authority photo)

The Phase II amount is on top of $94.4 million spent on Phase I, a 6-mi. stretch of Texas 249 known as the Tomball Tollway. It featured extension of toll and frontage lanes from Spring Cypress Road north to FM 1774 in Pinehurst.

The extended SH 249 will connect to frontage roads and a tollway in Montgomery County. Currently it ends just north of Spring Cypress Road in Harris County.

The Phase II project began on the north and southbound frontage lanes.

“Once these are completed, the existing traffic will be moved to these lanes and construction can begin on the tollway,” said John Tyler, deputy director of engineering at Harris County Toll Road Authority.

Bridge construction includes Harris County Toll Road Authority bridges over cross streets and Spring Creek. The tollway is designed to run electronically just as it was in Phase I.

Webber LLC of The Woodlands, Texas, is primary contractor. Webber was selected through a bid process. A subsidiary of Ferrovial S.A., Webber employs approximately 2,000 crewmembers and specializes in developing intelligent solutions that improve the communities. Between 80 and 85 workers are on the job each day.

Binkley & Barfield Inc., a civil engineering firm based in Houston, designed the project.

Heavy equipment on site includes track-hoes, vacuum trucks, MUD tanks (an open-top container, typically made of square steel tube and steel plate, to store drilling fluid on a drilling rig), cranes, cherry pickers (a hydraulic crane with a platform at the end for raising and lowering people) and front loaders.

Officials said the 249 Extension project will serve growing communities northwest of Houston. It will be an entirely new road that starts north of Magnolia, in Todd Mission.

It extends a Montgomery County segment that's now under development.

Total length of the four phases is about 14.6 mi. The project ends just east of Navasota, Texas in Grimes County.

The Texas Department of Transportation is overseeing construction of the toll road from FM 1774 in Pinehurst to Todd Mission, then will build the rest of the “Aggie Expressway,” expected to be non-tolled in Grimes County. When completed, the highway will connect Houston to College Station, home of the Texas A & M University Aggies.

The Montgomery County Toll Road Authority will take over for Phase III, which will replace the current stretch of Hwy. 249 from Spring Creek to FM 149 with tolled lanes and frontage roads.

The new highway will be non-tolled in Grimes County.

Phase IV will be a design-build project in which TxDOT will accept proposals for the project, rather than sending it out for construction bids. Phase IV crews will build a new four-lane road with two-lane, one-way frontage roads to the right of FM 1774.

When completed, the four sections, referred to as “Aggie Expressway” will connect Houston to College Station.