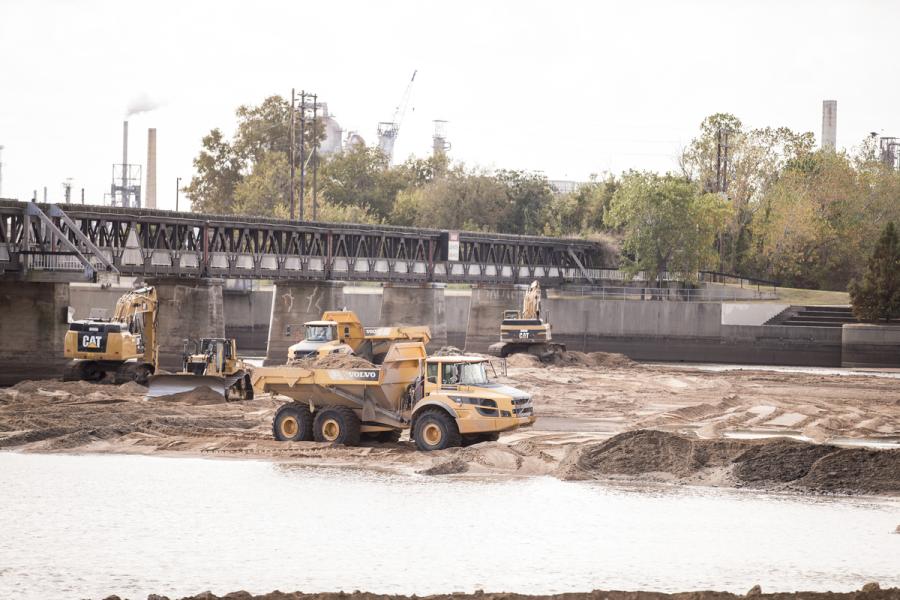 The Sherwood Construction Company Inc. is responsible for the $33 million earthwork contract to remove roots and grass, as well as preserving the topsoil, which will be returned to the site.

A $400 million public-private partnership initiated by the George Kaiser Family Foundation (GKFF) and an ongoing multi-million donation is transforming more than 100 acres of central Tulsa, Okla., into a major park — A Gathering Place for Tulsa.

The project began in Sept. 2014 and Phase 1, covering 66.5 acres, is due to complete in late 2017. When completed, the park is expected to attract more than one million visitors annually.

“We have seen tremendous progress over the past year and everything is on track,” said Jeff Stava, executive director and trustee of Tulsa's Gathering Place LLC. “With such a large project we have built in weather contingencies and known we would have to make adjustments as the work progresses. We have been lucky and Mother Nature has cooperated for the most part. We have had minor delays here and there, but been able to catch up in following weeks by working some extra shifts. Overall, the full team is very encouraged by the progress and current schedule.”

GKFF's $150 million donation, including $50 million worth of land, is being bolstered by another $200 million in private donations that are being received on a regular basis.

“It surpasses a $100 million gift to the Central Park Conservancy in New York,” said Stava.

TGP was designed by Michael Van Valkenburgh Associates of Brooklyn, N.Y., with Valkenburgh personally leading the design team. Phase I is being constructed from 24th to 31st streets on the east and west sides of Riverside Drive and from 24th Street to 34th Street along the west side.

“GKFF is leading the effort to significantly enhance the River Parks by connecting three adjacent waterfront parcels to the existing system, which will create a broad and active civic commons that people of all ages and backgrounds will enjoy,” said Stava. “This project represents an opportunity to turn Tulsa's waterfront into a force that will improve the city's social, economic and environmental sustainability.”

The two areas are being connected by two 300-ft. (91.4 m) land bridges spanning the Arkansas River. Amenities include the five-acre Chapman Adventure Playground; Williams Lodge; Peggy's Pond; the ONEOK Boathouse; gardens; bike paths; various outdoor sports facilities; and two grand lawns that can be used to hold concerts and other public events — QuikTrip Lakeview Lawn, which can accommodate 1,800 people; and The Great Lawn, which will have a skate park and BMX track.

Phase 2 calls for a cultural museum to be built on seven acres at TGP fulfilling the city's appetite for a children's discovery and science center. The project is expected to be complete in 2019.

The groundbreaking for Phase 1 occurred in Sept. 2014 and in July 2015 major dirt work and land contouring operations began.

“They originally projected drilling three piers per-day,” said Stava, “but with the sandy soil along the riverbank, they were able to do five to six piers daily.”

Stava notes that a cofferdam, made of rock, was put in place in 2015 so that the new land could be created.

“The dam allowed to us veer the water to the west side and create a dry area for the crews and their equipment,” he said. “Sherwood Construction then proceeded to construct the rock edges and put in place the fortification armoring to protect the bump-out extensions from erosion. Boulders are being used for the foundations, with each bumpout to be filled in with approximately 250,000 cubic yards of rock, sand, and silt dredged from the riverbed. The armoring prevents the bump-outs, when river levels rise, in high-water events, from being raked off and eroded.”

The new shoreline will be completed by early 2017. The Tulsa County Vision Authority gave $4.5 million to the River Parks Authority to help create the new land and support other shoreline upgrades.

The dirt work is extensive. Bulldozers, working at low elevations, dug out the foundations for the new boathouse and shored the walls prior to the construction on the new lodge that overlooks the river. The construction of the lodge should be complete in Dec. 2017.

At the south end of the two-acre pond, 18 ft. (5.5 m) of earth was excavated to create the pond prior to the start of the construction of the boathouse.

The dirt work is critical to the project as the terrain, which appears to be relatively flat, is being heavily excavated and refashioned. Stava pointed out that the former Riverside Drive and adjacent brig green lawn, both 52 ft. (15.8 m) above present grade and the highpoints of the area, are being reworked.

The project is international in scope as six 42 to 63 ft. (12.8 to 19.2 m) tall towers are being imported from Germany as part of Chapman Adventure Playground. The interactive towers, which include puzzles and games, and an educational component, are currently being delivered to Tulsa and constructed in preparation for future installation.

The Sherwood Construction Company Inc. is responsible for the $33 million earthwork contract to remove roots and grass, as well as preserving the topsoil, which will be returned to the site. The removal work covers 66.5 acres.

The first 3 in. (7.6 cm) of the soil is cleared, piled, and shipped off site, while the topsoil, from 3 to 18 in. (45.7 cm), is removed and placed in large aerated piles via 4-in. (10 cm) perforated tubes on the construction site. This storage system ensures the potency of the soil when it is placed back into the ground.

The material beneath the topsoil will be used as fill for the project.

“By utilizing as much of the existing soil for either structural or horticultural mixing, it saves both time and money,” said Stava, pointing out “that this nutrient-rich soil will help to rapidly restore the vegetation and trees that were removed, with the trees being able to achieve the equivalent of 10 years growth in four or five years. We will be planting over 6,000 trees before the park is completed.”

The project is ensuring that several thousand employees of general contractors and subcontractors have secure work for the next six years.

“The project is really important for the local economy as it is employing an average of 600 people on daily basis for several years and the money they earn is pumped back into the local economy,” said Stava. “The work is helping contractors get through the current oil and gas industry slump until better times return.”