A Year Late, Virginia's I-95 Express Lanes Expansion Set to Open in 2023 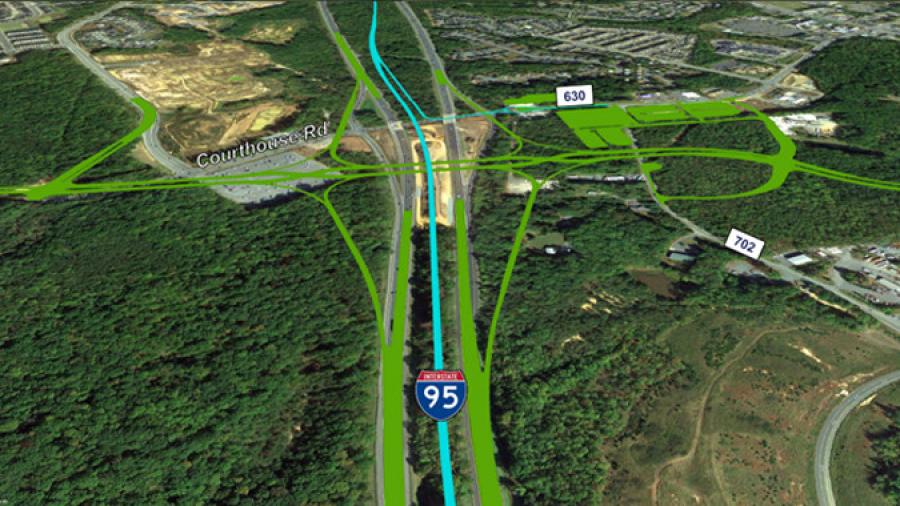 The I-95 Express Lanes Fredericksburg Extension will continue the reversible express lanes in the median of I-95, adding three lanes for approximately 1.5 mi., and two lanes for another 8.5 mi. from Route 610 (Exit 143) in Stafford County south to the vicinity of Route 17 (Exit 133) near Fredericksburg. At its southern end, the 10-mi. project will connect to the I-95 Southbound Rappahannock River Crossing and I-95 Northbound Rappahannock River Crossing projects. (Virginia Department of Transportation photo)

The expansion of the Interstate 95 Express Lanes project to the Fredericksburg area of northern Virginia is now slated to be finished late in 2023, more than a year behind schedule, toll operator Transurban announced May 2.

The new timeline comes months after the Virginia Department of Transportation (VDOT) and Transurban said the project was held up by a contractual dispute over soil conditions. That dispute has been settled and construction of the new toll lanes is now 60 percent complete, on pace for opening in December 2023, the toll company told the Washington Post.

The news source reported that the project, a public-private partnership between Virginia and Transurban USA, will deliver a milestone in the state plan to create a network of more than 90 mi. of high-occupancy toll lanes in northern Virginia.

Work on the 10-mi. extension began in 2019 and was expected to be finished this October. The project delays, along with the contract dispute, were blamed on challenges with the area's soil, including a plastic clay and silt material that officials said requires a different approach to construction.

Transurban and its contractor, a joint venture between Roanoke-based Branch Civil and Flatiron Construction's Mid-Atlantic Division in Morrisville, N.C., recently settled a dispute over the costs and timeline of the project.

The additional months and the mitigation needed to deal with the soil challenges will increase the original cost of $565 million by about $100 million, according to the Washington newspaper.

Transurban is financing the project.

Amanda Baxter, vice president of the Virginia market and operations for Transurban North America, said the late 2023 timeline is achievable after builders move beyond the "unpredictable" delays related to the soil issue.

"These megaprojects are very complex, and these types of things do happen," she told the Post. "We went into this year knowing that we wanted to find a path forward and we had good dialogue with our contractor on the opportunity to advance this project."

VDOT, which provides oversight of the project, said in December that it expected Transurban and its contractor to find a solution to minimize delays.

In a statement released May 2, VDOT's Fredericksburg District Engineer Marcie Parker said the transportation agency welcomes the outcome of negotiations "that benefits the people most affected by this megaproject: the travelers on I-95. We will continue in our oversight role to ensure that the project is delivered safely, is built with quality, and is completed as soon as possible."

Transurban officials said they were aware of the soil conditions when the project started and that its contractor conducted soil testing but acknowledged that the repercussions of the poor soil were larger than expected.

"The breadth and depth of that issue was much broader than a testing regime would allow you to know," said Baxter.

Transurban is extending the reversible 95 Express Lanes from Virginia Route 610 in the Garrisonville area to U.S. Highway 17 near Fredericksburg. VDOT officials say the Fredericksburg extension will increase lane capacity by 66 percent in the peak travel direction along one of the most congested stretches of the highway.

The Post reported that local leaders have said the additional travel lanes through Stafford County cannot come fast enough to a section of I-95 often known for nightmarish traffic. The project will hopefully end backups that form at the terminus of the 95 Express Lanes, near Exit 143/Garrisonville Road, where the toll road merges with general travel lanes.

"Interstate 95, primarily in Stafford County, continues to be faced with some of the most challenging commutes in the nation," explained Andrew Spence, director of community engagement for the county, in remarks to the Post. He added that the project "will provide some needed congestion relief."

Once open, carpoolers will be allowed to ride free, while solo drivers can use the lanes at a cost. State and county officials also believe that all drivers will benefit because more motorists in the toll lanes should also relieve congestion in the general lanes.

Much Work Left to Be Done

Construction since June 2019 has created additional traffic headaches for drivers in the corridor, although lighter traffic volumes during the coronavirus pandemic helped to minimize the effects. Most of the work, though, is being done in the median of the freeway.

Crews recently demolished the American Legion Road overpass and are working to rebuild it to accommodate the I-95 express lanes. That work, which will take about nine months, places another detour in Stafford County for people who live along the road.

In the coming months, the contractors will lift and install beams over the I-95 for future access points to the express lanes, which will affect traffic in both directions.

"You'll really see an uptick in the construction activities," Baxter noted, adding that although the opening date is targeted for December 2023, Transurban is offering incentives in hopes the contractor could open the toll lanes sooner.

Transurban operates a network of more than 50 miles of express lanes in northern Virginia lanes along interstates 95 and 395, as well as the Capital Beltway/I-495.