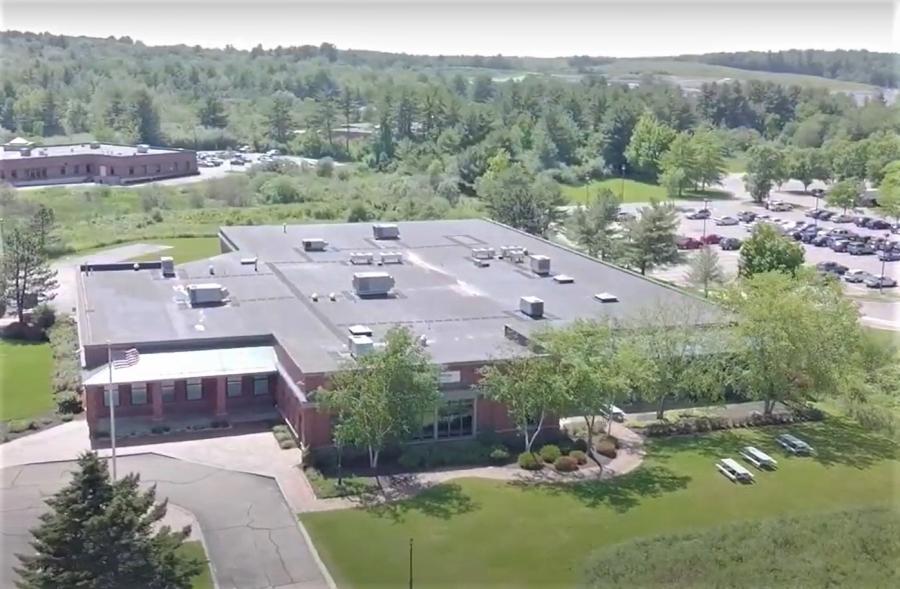 An aerial photo from 2019 shows 65 Gannett Drive in South Portland. The research lab would be added to the building's west side, which appears near the top in this image. (Trail Marker Productions photo)

Abbott Laboratories, the multinational company that makes COVID-19 diagnostic tests at two sites in Maine — in Scarborough and Westbrook — is making plans for a different kind of testing at a vacant office building in South Portland.

The site is in the Gannett Drive Business Park and includes a 34,800-sq.-ft. office building, where Abbott plans to build an additional 18,000 sq. ft. of lab space.

Terms of the lease were not disclosed, and a spokesperson for Abbott did not immediately respond to inquiries from Mainebiz.

According to a site plan application filed with the South Portland Planning Board, the build-out is estimated to cost Abbott $3 million, Mainebiz reported. The city's tax rolls show the property currently has an assessed value of $5.7 million.

It was initially developed in 1997 as a banking operations center, and most recently was a branch office of Bottomline Technologies Inc., a New Hampshire payment processing company that moved its South Portland location to John Roberts Road in 2019.

At Gannett Drive Business Park, Scarborough-based Landry/French Construction will lead the expansion as general contractor. Construction could begin in the next month or so and be completed by the end of 2022, Ken Mitsui of J.B. Brown & Sons told Mainebiz.

In 2020, Landry/French constructed a 126,100-sq.-ft. plant for Abbott in Westbrook, where the company ramped up production of its rapid diagnostic test for COVID. In July, Abbott announced it was laying off almost 400 workers as demand for the tests began to wane.

The new facility in South Portland will not be manufacturing tests, according to the application submitted to the local planning board.

Instead, Abbott plans to use it as a research and development site, employing about 90 people. Nearly half of the 53,000 sq. ft. of space will be devoted to laboratory analysis of raw materials used in pre-market studies of new medical products.

The company also noted in the filing that no animal or human test trials will be conducted at the site. Additionally, the expanded facility will generate a small amount — under 100 kilograms per month — of biohazardous waste.

Abbott employs 109,000 people in 160 countries to produce diagnostics, medical devices, nutritional products and branded generic medicines. The company reported sales of $34.6 billion in 2020, up from $31.9 billion the previous year.