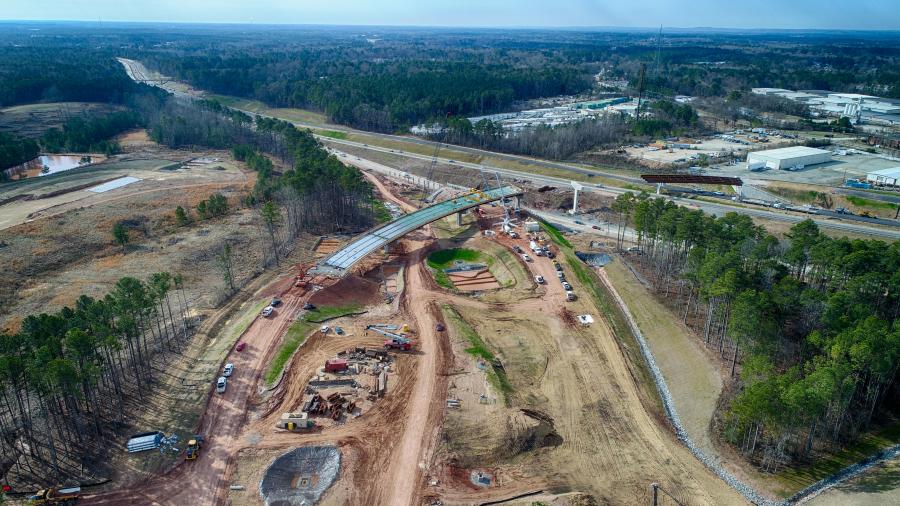 The North Carolina Department of Transportation, city of Durham and Durham County broke ground on the 3.9-mi. (6.2 km) project on April 22, 2015. It will provide a direct connection between the Durham Freeway (N.C. 147) and Miami Boulevard (U.S. 70) — two major east-west highways in the area — and improved access to I-85 and I-40.

The project is scheduled for completion in January of 2020. According to Cameron Richards, resident engineer of Division 5 Construction – Aviation Parkway at NCDOT, the progress schedule showed the progress at 39 percent compared to a scheduled 34 percent as of the last pay estimate.

The full dollar amount of the contract is $141.9 million, and the project was awarded to Dragados USA, with Matt Levey serving as the deputy project manager.

The completed East End Connector will be a 3.9-mi. four-lane freeway with space for a future third lane in each direction.

In addition to building a new roadway, work involves building 16 bridges, rehabilitating four others and installing four culverts on U.S. 70, N.C. 147 and other locations in project area. The project also involves grading and drainage.

According to NCDOT, upon the completion of the project, the East End Connector is expected to promote economic development in areas along the I-85 corridor toward Virginia by improving access for people and goods between Durham (and counties north of the city) and major employment and retail centers, including Research Triangle Park, Raleigh-Durham International Airport and Wake County.

It also is projected that it will alleviate congestion on the Durham Freeway through downtown Durham and to aid in diverting traffic off local roads.

“The primary challenge on the project is the phased construction,” Richards said. “Temporary alignments and structures must be constructed to maintain both vehicle and train traffic throughout the project as new aspects are built. Extensive coordination with utility owners is also required to ensure that conflicts are avoided during construction.”

A unique structure that the project features is described as a “scissor bridge,” according to Richards.

“This structure is unique in that traffic will not travel across the end bents of the structure, as is typical, but will actually run parallel to them on the deck slab,” he said. “This bridge will carry traffic travelling along the new East End Connector corridor (the new stretch of roadway between U.S. 70 and NC 147) over NC 147.”

NDOT noted that some short-term detours and lane closures have been necessary during construction. These include a temporary detour alignment on N.C. 147, with some overnight lane closures during the week and weekends on U.S. 70 and N.C. 147; temporary road closures for a maximum of 30 minutes between midnight and 5 a.m. on U.S. 70, N.C 147, N.C. 98, Rowena Road, Ellis Road, Miami Boulevard, Lynn Road, Pleasant Road and Angier Avenue; and a detour on Holloway Street from 9 p.m. to 5 a.m. on weekends. Lane closures are prohibited on southbound N.C. 147 between 8 and 10:30 p.m. when there are events at the Durham Performing Arts Center and Durham Bulls Athletic Park. In addition, there will be no lane closures during peak travel times of 6 to 9 a.m. and 4 to 7 p.m. on weekdays.—CEG