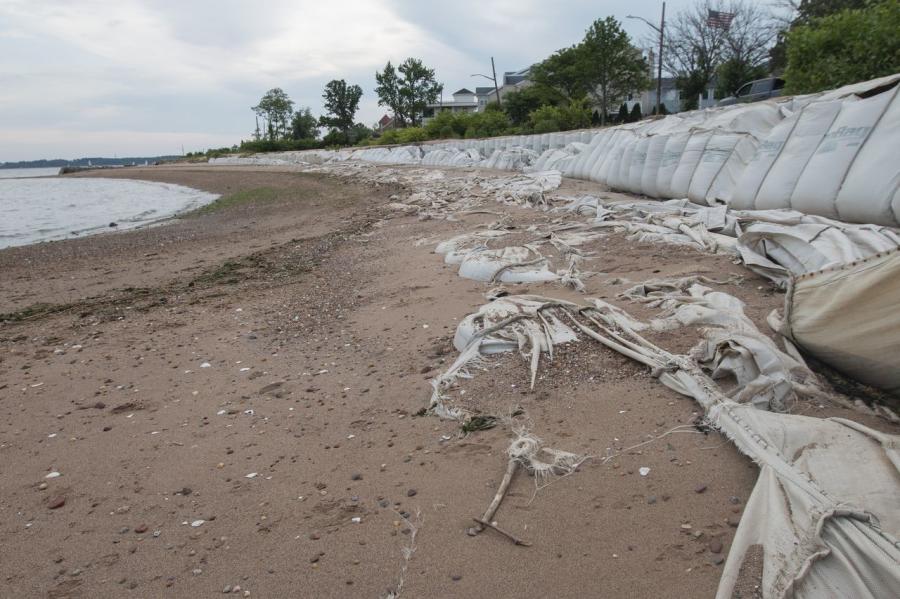 Sandbags meant to protect Tottenville's coastal neighborhoods are shown to be in disrepair on June 2, 2021. (Staten Island Advance/Paul Liotta)

A project intended to protect Staten Island's South Shore coastal communities has been given the go ahead to begin construction this fall after years of delays.

The state-run rejuvenation of the area, known as "Living Breakwaters," was funded and set to begin construction in 2018, according to a 2017 report from the Staten Island Advance/SILive.com, but the project laid dormant after that.

A spokesperson of New York Gov. Andrew Cuomo's Office of Storm Recovery (GOSR), which is overseeing the project, emailed a statement to the Staten Island news outlet announcing that the agency had executed a contract with Weeks Marine, based in Cranford, N.J., and that it expected the project to be complete by 2024.

"GOSR is excited to begin in-water construction by this fall on our innovative Living Breakwaters project, which will effectively attenuate wave action and make the South Shore of Staten Island stronger, more resilient and more eco-friendly," GOSR General Counsel Emily Thompson said in the release.

Another GOSR source pointed out that apart from the coronavirus pandemic, the project was further delayed when the state reassessed its cost after the first bids came back higher than expected.

Now, following cost adjustments, the Living Breakwaters effort is expected to have a total price tag of $107 million — $60 million of which will come from the federal government, and the rest being paid for by the state.

The GOSR noted that when complete, the project will be made up of 2,400 linear ft. of near shore "breakwaters," or partially submerged structures located between 730 and 1,200 ft. from shore, designed to reduce risk and provide habitat for local marine life. The work is slated to be adjacent to the Tottenville section of Staten Island's southwest coast.

Crews with Weeks Marine also will perform shoreline restoration designed to replenish the sand on the beach from Manhattan Street to Loretto Street. The GOSR described this stretch of the shoreline as an area "especially prone to erosion and where public and private assets are vulnerable," in its emailed statement to the Advance/SILive.com news outlet.

in 2012. The GOSR also said that educational programming will be possible using the new installments, and access to the water is set to be improved as well.

Representatives with the GOSR met with Borough President James Oddo and other staff at borough hall the second week of June to announce the latest update on the rejuvenation project, according reports from the Staten Island Advance/SILive.

"We are pleased that the Living Breakwaters project will begin construction later this year," Oddo said. "At Borough Hall, we always emphasize the importance of following the science when it comes to making decisions for the community. The Breakwaters not only help to mitigate the force of damaging storms but also create a marine habitat that will enrich the off-shore ecosystem for wildlife and for public recreational use."

Seven years removed from securing the project's funding, and three years removed from an expected start date, City Councilman Joe Borelli (R-South Shore) wants to know why the project has taken so long. He pointed to similar projects in New Jersey that had their funding from Washington secured around the same time and have since been completed.

"Years behind New Jersey. There's no way to work around that," he said.

Borelli visited the site of the planned project recently with Rep. Lee Zeldin (R-Long Island). During their tour, near the intersection of Surf Avenue and Loretto Street, the pair noted the dilapidated sandbags installed as a temporary measure to protect the coast and decried the lack of progress on the larger project.

A former member of the New York Senate, Zeldin's district at the time suffered significant impact from Superstorm Sandy. Advance/SILive reported that he criticized the state's inaction, adding that the South Shore community was left at risk by the governor's office.

"This is not one of those projects, at all, that you should be almost a decade later rolling any dice with," he said. 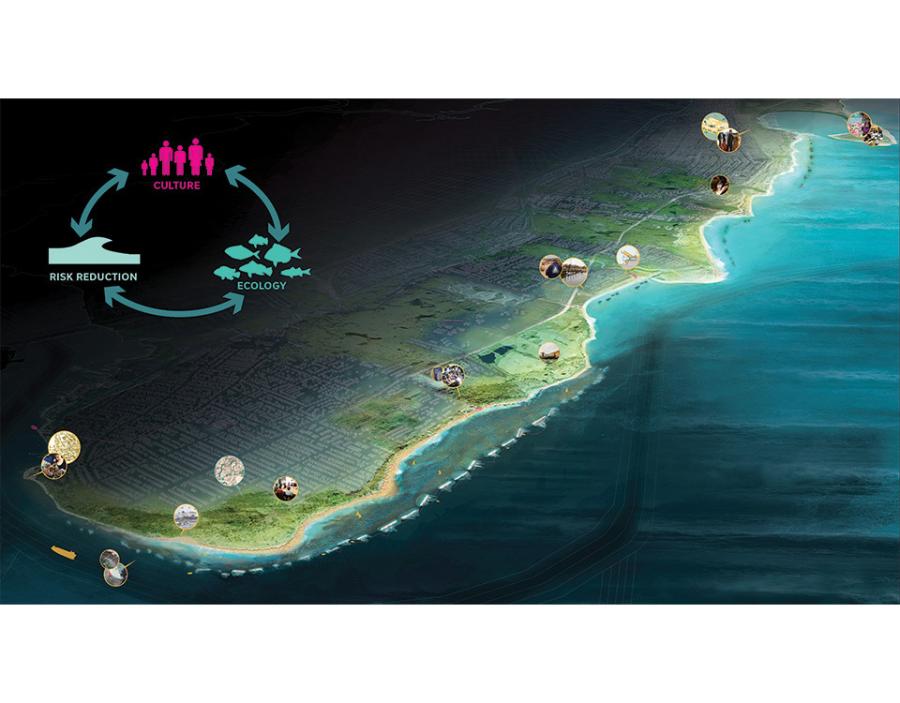