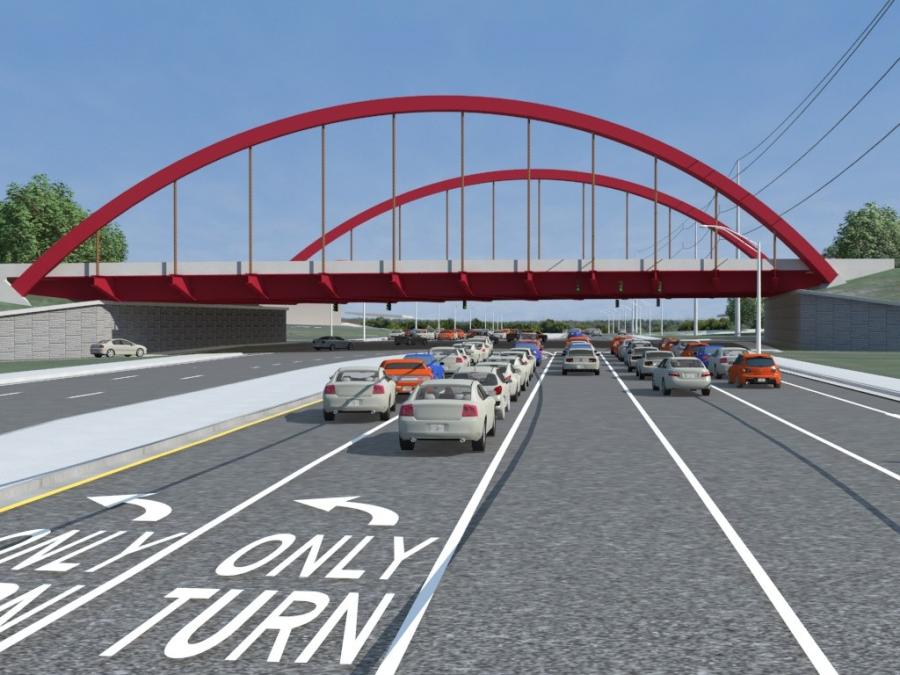 When complete, the project’s most striking feature will be the iconic Crimson Arch Bridge, a cable-stay arch span designed to support the interstate across the busy highway along Tuscaloosa’s southside. (ALDOT rendering)

In the first half of February, the Alabama Department of Transportation (ALDOT) closed portions of Tuscaloosa's McFarland Boulevard to allow for interstate bridge construction as part of a three-year-long, $83.4 million project.

Since January 2018, ALDOT crews have been working to add lanes on Interstate 20/59 from near Exit 73 to near Exit 77 and construct a single point urban interchange (SPUI) on McFarland Boulevard/U.S. Highway 82 directly below the interstate.

John D. McWilliams, spokesperson of ALDOT's West Central Region, said the lane closures were necessary for the contractors to safely install arches on the I-20/59 bridge that crosses over McFarland Boulevard.

Nearly 60,000 drivers use the I-59/20 bridge over McFarland daily as construction continues.

When complete, though, the project's most striking feature will be the iconic Crimson Arch Bridge, a cable-stay arch span designed to support the interstate across the busy highway along Tuscaloosa's southside.

Its crimson coloring is a nod to the town's fabled University of Alabama Crimson Tide athletics program, specifically its football team, the reigning 2021 national champions.

The arches are necessary as they will hold the weight of the bridge over the road below and will allow the contractor to remove underneath supports. This design will allow for more space on McFarland Boulevard where the SPUI is being constructed.

Last September, however, ALDOT said that the eastbound arch on I-20/59 over McFarland Boulevard would be replaced about 10 months after confirming that there were concerns with its initial installation.

As a result, Birmingham-based Brasfield & Gorrie, the company awarded the contract to improve I-20/59 and install the arches, removed the eastbound arch during the weekend of Jan. 15 to 17, 2021.

This meant that the enterprise that began in early 2018, and was supposed to be finished in December 2020, is now set for completion this summer, at the earliest.

The overall project includes widening the northbound and southbound sides of I-20/59 to three lanes from about a mile north of Exit 76 to just south of the McFarland Boulevard bridge, but the problem with the arches has gotten the most attention.

Meant to be painted crimson to serve as a default gateway into the city of Tuscaloosa, ALDOT inspectors found soon after the eastbound arch was erected in early November 2019 that it was torqued, or twisted, in a way that could pose problems for the future.

It was unclear whether the problem with the arch occurred during manufacturing or installation, but ALDOT officials have said the arches are meant to be more than just a crimson-colored doorway to the college town.

Correcting the problem will allow ALDOT to reconfigure the current diamond shape intersection of I-20/59 and McFarland Boulevard to a SPUI, which will eliminate one of the red lights now at the intersection. Doing so is meant to improve traffic flow along the roadway while simplifying the access to and exits from the interstate.

An SPUI's function is to improve travel time while also enhancing safety, as it allows motorists to simultaneously turn without crossing the path of opposing left-turning motorists and moves more vehicles through the intersection while reducing potential conflict points.