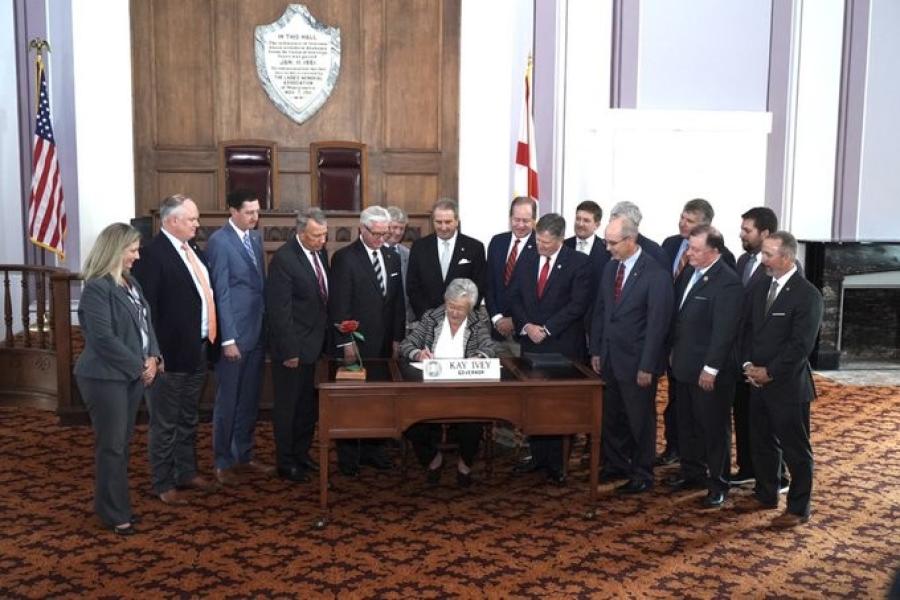 Gov. Kay Ivey said she was "extremely pleased to have joined leadership of the Alabama Legislature to sign a major prison construction bill package."

Gov. Kay Ivey on Oct. 1 signed bills authorizing the construction of at least two new state prisons that combined could incarcerate more than 8,000 people. Her signature was added to the bills soon after the Alabama Legislature approved the measures.

The Alabama Senate voted 29 to 2 for the bill, which supporters see as laying a foundation to address widespread prison violence that has resulted in a federal lawsuit. Opponents view the bill as avoiding the key issues fueling that violence. The House concurred in a minor change later in the day Oct. 1 on a 74 to 22 vote.

"Achieving a solution to our problems rather than a court mandate was paramount, and that's what happened today," Ivey said prior to signing the legislation.

The Senate also approved the use of $400 million in COVID funds designed for state and local government use and a transfer of $154 million in General Fund money for the project, as well as revisions to mandatory sentencing requirements.

The bill, sponsored by Alabama House Ways and Means General Fund committee chair Steve Clouse, a Republican from Ozark, will provide $1.3 billion for the construction of two new men's prisons in Elmore and Escambia counties, the Montgomery Advertiser reported.

Each facility is planned to incarcerate at least 4,000 individuals. The Elmore prison also will be designed to provide medical, mental health and rehabilitation treatment, as well as space for job training.

They will be the first prisons built in Alabama since the mid-1990s, according to AL.com.

The online Alabama news service reported that in passing the bill, lawmakers also carved out an exception to the state's standard competitive bid process on public works projects for the Elmore and Escambia facilities. By allowing direct negotiations with the contractors, rather than starting from nothing with competitive bids, the state would save a total of about $75 million and get the prisons built sooner.

In addition, the new legislation also includes language encouraging the participation of minority-owned businesses in prison construction by mandating Alabama to provide training programs to help minority builders compete for the work.

The construction is the first of several phases to overhaul the state's prison system and will be followed by the closure of four other facilities and an evaluation to determine which ones should be closed or renovated.

"We need to get those buildings up and out of the ground as quickly as possible," Senate Finance and Taxation General Fund chair Greg Albritton (R-Atmore), explained to the Advertiser. "Site prep is already ongoing. This is a huge step in curing many of the difficulties we have. We will have new facilities [and] replacements, [and] we'll be able to take down and replace those that are no longer sustainable. And we will be able to put people in safe conditions."

The Montgomery newspaper noted that to pay for the prisons, the state would borrow $785 million, use $400 million of the $2.1 billion COVID funds aimed at state and local government recovery, and about $135 million in General Fund money. The bill also authorizes $19 million for the acquisition of a prison facility in Perry County that officials said would be used to address parole and probation violators.

Clouse's bill also opens the door to a 1,000-bed women's prison to replace the Julia Tutwiler Prison for Women in Wetumpka. In 2015, the state and the U.S. Department of Justice (DOJ) entered a consent order for Tutwiler, opened in 1942, over sexual harassment and abuse of inmates in the facility.

However, the new prisons bill does not provide a dedicated funding source for any of those projects.

Arguments Eventually Led to a Settlement

Debate in the Alabama Senate was muted compared to earlier debate in the House, where Democrats questioned the purpose of the bill. The only major pushback on the proposal in the Senate prior to Gov. Ivey's signing came from Sen. Billy Beasley (D-Clayton).

Beasley, whose district includes three prisons, wanted measures to ensure communities in his area received help to pay back debt accumulated for infrastructure used to support their correctional facilities.

The Montgomery news source reported that Ivey and Alabama Department of Corrections Commissioner Jeff Dunn have argued for years that the state's current prison facilities are beyond their useful lifespans, are dangerous for staff and inmates, and lack space needed for programming.

Supporters in the Legislature, including Clouse and Albritton, argued that new prisons would provide a "foundation" for ways to improve the prisons. For example, they said that safer conditions could make it easier to recruit and retain staff who could prevent violence.

After signing the prison legislation, Ivey noted that more work was needed, though she did not specify what she would support.

"While more reform of the system can and will be addressed in the system, today's bill signing on the construction part of this issue is a major step forward," she said on Oct. 1.

The use of COVID money for the prison project drew criticism from House Democrats in late September. But Senate Democrats expressed more comfort with it after the bill signing, citing the fact that the fund where the money will come from would still leave $1.7 billion for COVID relief in Alabama. They added that they had heard from constituents who wanted that money to go to COVID recovery.

Beasley, the only senator to vote against the use of COVID money, told the Advertiser that "we need to do more" to assist hospitals and nursing homes hard hit by the pandemic.