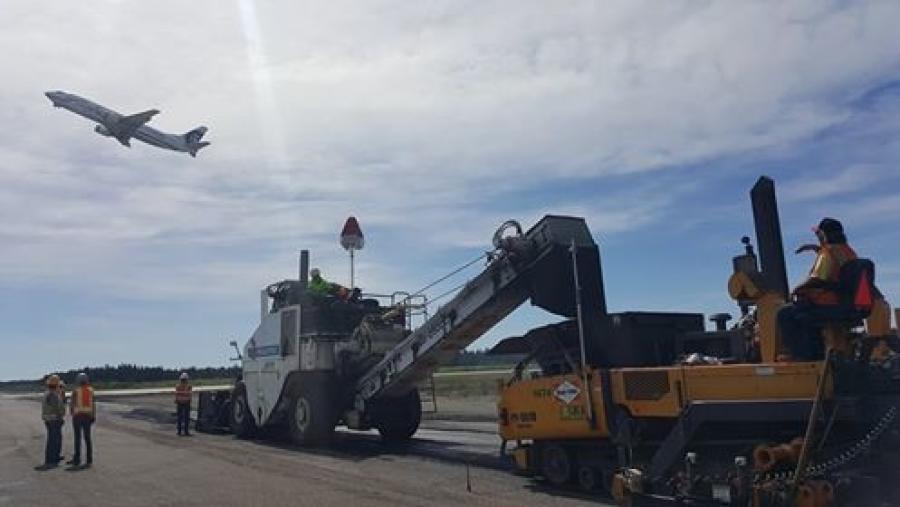 Knik Construction Co. Inc., of Anchorage, Alaska, appears to thrive on the difficult construction, dredging, and paving projects that most would be intimidated to take on. A perfect example is a project in Yakutat, Alaska.

Yakutat, as described by its own chamber of commerce, is “located along the rugged Alaskan Gulf Coast between Sitka and Cordova. Bounded by the Gulf of Alaska on the south, nearly impenetrable mountains to the north, and coastal glaciers to the east and west, Yakutat is about as remote as one can get in Alaska. There are no roads leading into or out of Yakutat. All commerce and access must occur via air or sea.”

The project that took Knik to this picturesque village is the Alaska Department of Transportation and Public Funding (ADOT&PF) Yakutat Airport Runway Pavement Rehabilitation project. In Alaska, the state DOT maintains all the airports.

The Yakutat Airport (YAK) is a state-owned, public use airport located 3 mi. (6 km) southeast of the central business district of Yakutat. For the approximately 600 residents of Yakutat, this two-runway airport is critical. The FAA shows an average of 11,000 YAK airplane boardings annually.

“Our project was the asphalt resurfacing of runway 11/29, which is 8,136 feet by 194 feet, plus a 300 foot taxiway,” said Amanda Gilliland, project manager of Knik Construction Co. “For the project, the runway was divided into three sections — raising the 29 end, which tapered from the existing runway to an elevated 2.5 feet; a middle section where the runways intersect, that required varied profile milling; and a final section that needed .5-inch surface milling, which was enough to remove the texture grooves.”

Knik started processing aggregate in March 2016 and began work on the runway on May 1. It was opened up for use at the end of August.

“We needed to carefully plan our shipments, because if anything was forgotten, we were stuck until the next month's barge, or we would need to fly it in,” Gilliland stated. “It also meant that we needed very reliable equipment with maintenance up to date — we wouldn't want to send a truck over on the barge that needs new tires in a week.”

A total of 6,000 tons (5,443 t) of millings were removed, which was mixed with 50 percent D-1 locally-produced aggregate base and reused as fill on the section of the runway that required elevation to alleviate water issues.

“Working in a remote location, it is beneficial to try to reuse immediately rather than stockpile, since the pile could sit for years or longer before it would be used as fill or RAP,” said Gilliland. “To ensure accurate milling depth, our cold planer is equipped with GPS machine control.”

There were two paving crews with six workers on each, plus eight locally-hired truck drivers. For the most part, the existing runway served as the base for the paving. The asphalt plant was located near the shipping docks. The haul trucks would collect loads and transport them 8 mi. (12.8 km) to the material transfer vehicles (MTVs) at the runway site.

“Shuttle Buggies worked great — we rarely do any paving without them,” Gilliland stated. “They give us consistency of HMA temperature and ensure against segregation. We've been using them a long time and, quite honestly, couldn't imagine doing any large paving projects without them.”

According to Gilliland, the two MTVs kept both pavers productive and in instances where there was not adequate space for the trucks to dump, the belly dump could offload in another area not far from the paving train and the Shuttle Buggy would pick up the pile from there and transport it back to the paver — without having to stop the paver. The Shuttle Buggy has 25 tons (22.7 t) storage capacity.

The Yakutat Airport project required 62,000 tons (56,245.5 t) of HMA, making it the biggest paving project in Alaska for 2016. On a good production day, Knik Construction paved as much as 6,000 tons, leaving the top lift of the runway with very few transverse joints. The company used infrared cameras to shoot the pavement right after it's placed to confirm that there are no temperature variations — cold spots in the mat. Minimal color variation in the infrared image indicates minimal temperature difference in the mix, a result of good remixing.

“The Shuttle Buggy uses a triple auger mixing technology which equalizes temperatures and evenly mixes large and small particles,” Gilliland said. “The asphalt spec for the job, talks about the HMA temperature requirement and the thermal segregation penalty, and also the requirement of using a MTV on the job.”

With the project completed, Gilliland said, “Even with the numerous rain delays, the challenging logistics getting equipment and supplies, we're proud that we're completing the largest asphalt paving project in the state this year and that we earned quality bonuses for the composition and density of our finished paved surface. This is definitely a unique project that all of us working on will remember for years to come.”