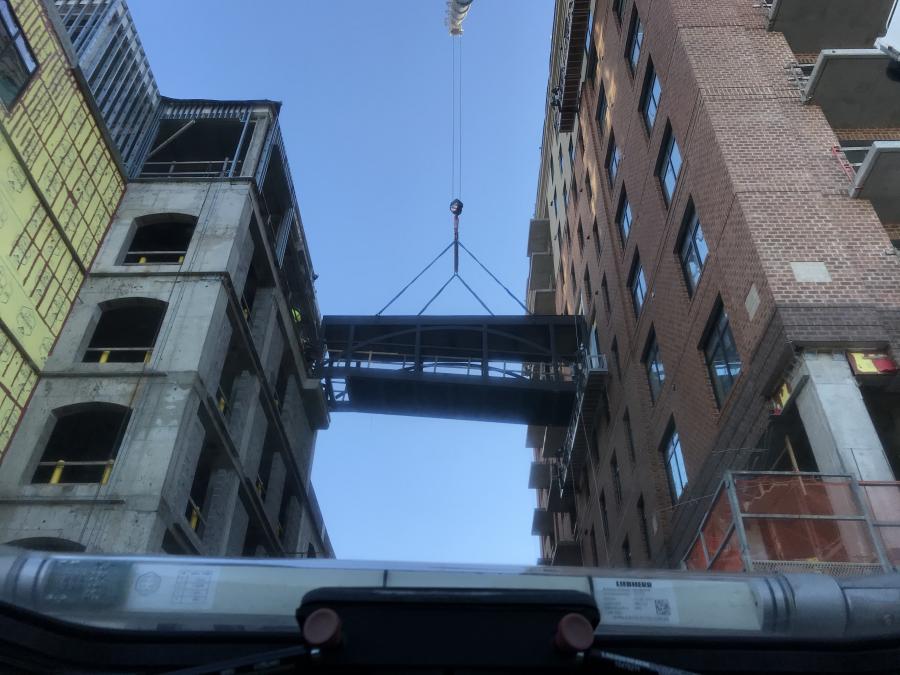 The pedestrian bridge will join the two towers near the top, so residents in one tower will have access to the pool and other amenities on the roof of the second building.

Sitting in the cab of his Liebherr LTM 1300-6.2., a 300-ton (272 t) mobile crane, Raymond Gallagher maneuveres a 13-ton pedestrian bridge that will join two buildings. But he knows he has to rely on a team of people to make the lift successful — because he can't actually see the bridge.

Gallagher is a 16-year veteran of ALL Carolina Crane Rental of Wilmington, a member of the ALL Family of Companies. Fourteen of those years he's been an operator, making Gallagher well seasoned and this just another day in his "office."

Today's office is the River Place project in Wilmington, N.C., a $20 million development with 26,000 sq. ft. of parking, retail shops and restaurants, plus 170 apartments spread across two towers, north and south. The pedestrian bridge will join the two towers near the top, so residents in one tower will have access to the pool and other amenities on the roof of the second building.

Gallagher knows what to expect because the team at ALL prepared a detailed 3-D lift plan ahead of the work. He has studied it and is ready.

A few days before Gallagher and his LTM 1300 arrived on the scene, an operator in a smaller-capacity crane had lifted the multiple bridge sections to the top of the roof, where ironworkers assembled them into the single bridge span. Now, Gallagher is relying on those same ironworkers to rig the 27,000-lb. piece in preparation for his hook.

"Ironworkers rigged the bridge with synthetic slings, and shackles and lugs in a four-way hookup. Each corner was rated for 31,000 pounds, so we had plenty of capacity for the bridge span," Gallagher said.

Next comes the part where those flaggers become so crucial. Because Gallagher can't see the bridge himself, he has to rely on the signals of two flaggers positioned atop each building.

"I think of them as the real crane operators, and I'm the guy pulling the levers," said Gallagher.

"Once I have the piece hooked, I boom up away from the building, swing around, and boom down to set the piece," said Gallagher.

Along the way, signals from the flagger let him know when to boom up or down. Taglines attached to the bridge keep it from swaying.

Support platforms had already been installed on the sides of both buildings. Once the bridge is set on these platforms, Gallagher has to hold the bridge in place for 30 to 45 minutes while the span is welded into place.

"With everyone working as a team, the lift went as smoothly as possible," Gallagher said. "Thanks to their excellent planning and execution of the pick, it was another great day at work."