Alliance With SANY Sets Ironpeddlers On Pathway to Success 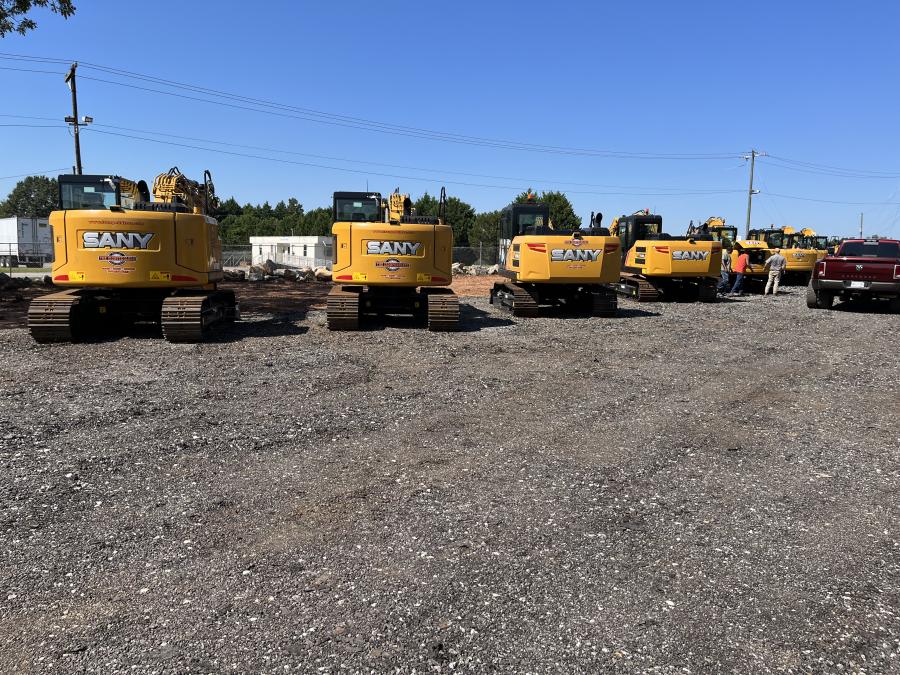 The company keeps many SANY excavators in stock ready for its customers to rent or buy. (CEG photo)

Ironpeddlers, a construction and road equipment dealer based in the Charlotte-Monroe market in North Carolina, has thrived for most of the past 48 years as a family-run company noted for offering used machines and parts, along with a close working relationship with its customers.

But a decision to align itself with SANY America Inc., a manufacturer of excavators, wheel loaders and motor graders, among many other products, completely changed Ironpeddlers' direction by making it a successful original equipment manufacturer (OEM) dealership.

In the wake of its partnership with SANY, Ironpeddlers shifted to an expansionist mode, and now has six locations in the Southeast. Besides its original stores in Monroe, N.C.; London, Ky.; and Savannah, Ga., it opened its first SANY branch in the growing Greenville-Spartanburg market in Upstate South Carolina, followed by other SANY locations in Raleigh, N.C., and in Myrtle Beach, S.C., Ironpeddlers' most recent addition.

Founded in 1974 by Tommy Broome, Art Cates and Jim Birchfield, Ironpeddlers has been family-owned and -operated ever since, according to Broome's son, the current company president, Anthony Broome. He and Kim Myers, Birchfield's daughter, are the two active owners in the dealership. Myers also serves as executive vice president of parts sales and service of Ironpeddlers.

In its early years, the company made its name through a commitment to offering robust customer service.

As a SANY dealership, Ironpeddlers has added to that pledge by specializing in keeping its customers' machines running smoothly with skilled technicians and a vast parts inventory. It also runs full-service shops and employs a team of road technicians. In addition, when contractors find their machine has reached the end of its service life, Ironpeddlers is always ready to buy the old piece and part it out, according to Broome.

Due to its reputation for being a popular heavy equipment dealership among grading and building professionals, Ironpeddlers began to attract attention several years ago from various OEMs about selling their machines through the company.

Coincidentally, according to Broome, for the first time, he also was looking to add a primary construction equipment manufacturer to expand beyond Ironpeddlers' lineup of used machines and parts.

"Around 2016, I started doing my research on different OEMs," he said. "A few independent dealers with whom I had good relationships had recently picked up the SANY brand. From them, I heard many good things about SANY, chief among them were its warranties and common components, such as engines made by Cummins, Yanmar and Isuzu."

While having lunch one day with Chief Financial Officer Paul Stokey, where the two executives were discussing their plans for growing the company, Broome received a bit of wise counsel that ended up settling the matter.

"Paul said, ‘The way I see it, you are at a fork in the road. You can stay on the track you are going and keep Ironpeddlers the same, or you can take a chance and go with a new OEM such as SANY,'" Broome said. "I struggled with it, and then he told me, ‘Well, wouldn't you want to try it in your forties, rather than be in your sixties or seventies and wish that you had?'"

Stokey's insight proved to be the jumpstart Broome needed, he said, to take Ironpeddlers in a new and rewarding direction by becoming a SANY dealership.

"Along with the product line, the availability and the economy, being associated with SANY has improved our volume and our customer base, and what types of customers we can reach with new equipment who only run new machines," Broome said. "In short, we have been very fortunate to be associated with the brand."

Most SANYs sold through Ironpeddlers companywide, he added, "have been used in the residential building industry, however, we have several machines in concrete plants and mines as well as the paving and clearing industries."

Not long after beginning its association with SANY, Broome's company was given the Upstate South Carolina territory in which to sell, rent and service the manufacturer's line of products.

The Greenville-Spartanburg market was the closest open territory to the dealership's Monroe headquarters at the time, he said, and his company soon began a search for property in the area to set up shop, if only temporarily.

"We found a small laydown yard in Fountain Inn, S.C., southeast of Greenville, and bought a small, prefabricated barn as an office building," Broome said. "Once we painted a sign, we were in business."

Later, after Ironpeddlers and SANY had established a foothold in the market, the manufacturer asked Broome's company to build a larger facility to better care for its customers' needs.

"Now, we have a seven-bay shop with a road frontage along Interstate 85 in Duncan, S.C., between Spartanburg and Greenville," he said, adding that the branch sits on 6 acres.

Depending on their size, several machines can be housed in the service bays at any one time. From the location, Ironpeddlers keeps three service trucks ready for quick dispatch and a trio of resident technicians are on hand to repair any equipment issues.

To date, the largest SANY machines sold by Ironpeddlers in the Greenville market have been a pair of SY500 excavators, a 120,000-lb. model. Broome noted that Big Mountain Machinery in the Asheville, N.C. area bought them for use in building a large school project.

In eastern North Carolina, Ironpeddlers opened its Raleigh dealership two years ago, capitalizing on the non-stop growth of the dynamic Triangle market.

Back in the Palmetto State, the company is preparing a permanent home for its latest branch, this time in Horry County along the coast. Ironpeddlers is currently leasing a facility in Myrtle Beach, another dynamic region for construction, while it readies a permanent building in nearby Conway. Broome said the new location should be up and running in the fourth quarter of 2023.

That means the Myrtle Beach-area branch, in tandem with the Greenville-Spartanburg, Raleigh and Charlotte-Monroe facilities, will effectively cover almost the entirety of Ironpeddlers' sales territories for SANY products in the Carolinas.

As a result, more heavy equipment made by SANY can now be spotted working on highway and field projects in the two states than ever before.

Broome attributed that to Ironpeddlers placing an early emphasis on lessening the downtime of its machines once they are on the job site.

"We went heavy in the service end of the business prior to taking on a lot of territory," he said. "That included making sure we had the top technicians on hand to service customers quickly."

The contractors Ironpeddlers serves have responded positively to the significant investments it has been making to open its three branches over the last five years.

"What we found in expanding into the OEM equipment world is that your customers want confidence that you will be there to service them, so having a brick-and-mortar shop provides them with comfort that you are going to fulfill their needs," Broome said.

Ironpeddlers understands that even the most dependable equipment requires a new part now and then. To be ready for those moments, the dealership has a large repository of new, used and remanufactured parts and accessories in each of its six locations.

Its parts division specializes in high-quality used components pulled from the dealer's yard — one that holds hundreds of machines. If a part cannot be found at one of its branches, Ironpeddlers also can locate it through a worldwide dealer network.

Lately, the used parts division of Ironpeddlers has proved to be quite successful.

"The parts business has come in well over the past several years because with the down economy, people often work with what they have, so they will buy used parts instead of new machinery," he said.

"Additionally, I would be remiss if I failed to mention the great work our team in Savannah has done in the past year under the leadership of a new manager since January 2021," Broome said. "They have grown our customer base and new parts sales in ways I never would have imagined."

In looking ahead, Broome believes that Ironpeddlers' future will continue to shine bright.

"We want to keep the SANY brand as our main OEM so we can continue to offer excellent service to our Southeast customers." 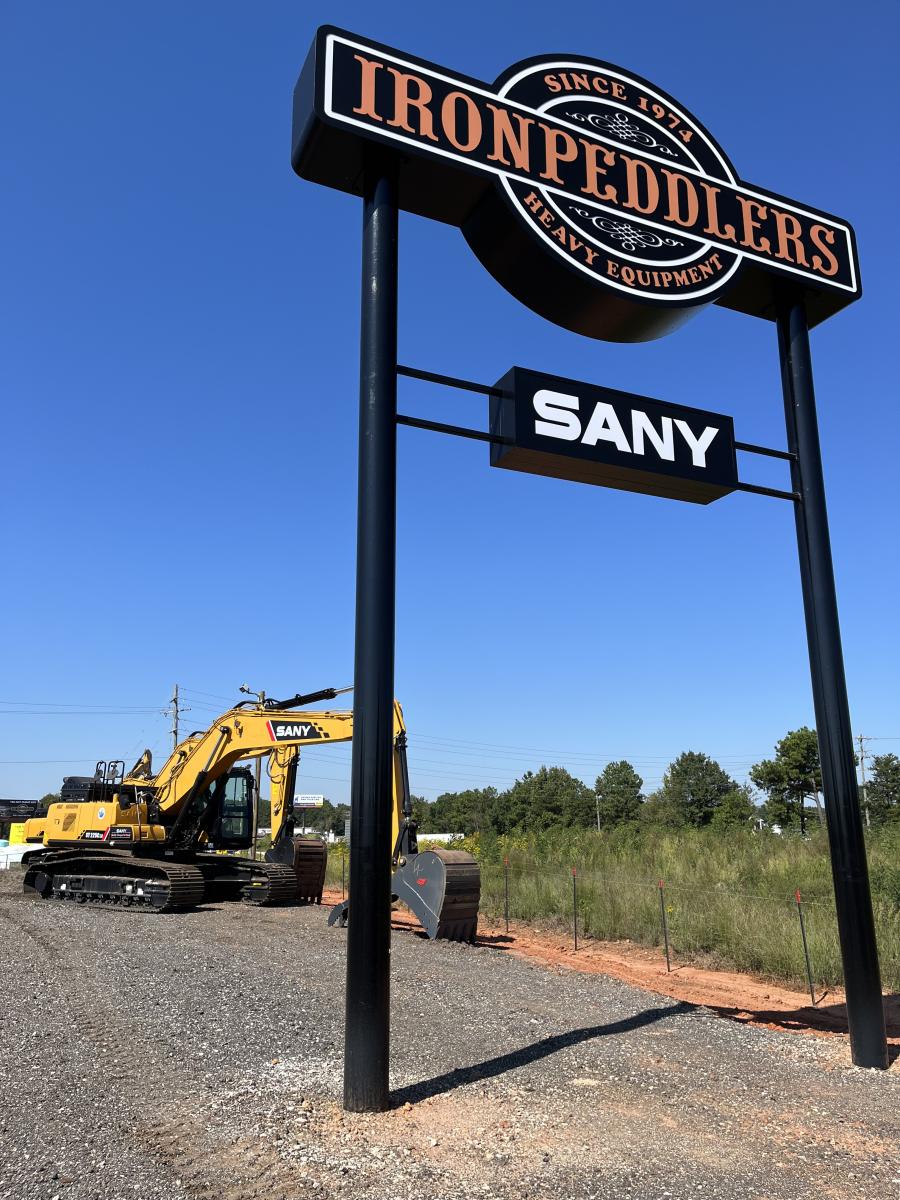